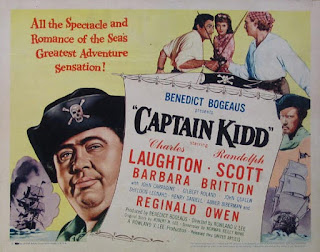 Any movie with Charles Laughton as a pirate has to be worth a look, and Captain Kidd (released in 1945) turns out to be pretty good.

William Kidd was one of the most famous of all pirates, and one of the most controversial, the controversy stemming from the fact that there is considerable doubt as to whether Kidd really was technically a pirate at all.

In the movie we’re left in no doubt that Kidd (played of course by Laughton) is a cut-throat and a remarkably devious rogue. He is also ambitious. He wants to buy his way into the aristocracy and that’s going to require a great deal of money. It’s also obviously going to require him to appear to have obtained the money by legal means. So when he sets out on   his latest voyage, armed with a letter of marque (authorising him to attack ships of enemy states) signed by the King, his intention is to engage in piracy whilst appearing to be acting within the letter of the law. 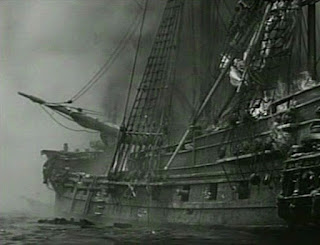 For this voyage he selects his crew with great care. They are all prisoners from Newgate Prison, all awaiting execution for piracy, and all of them guaranteed to be loyal since they’ve been promised a royal pardon if they survive the voyage.

His officers are even bigger rogues than the crew. They are pirates who have served with Kidd before. They have no scruples whatsoever.

Kidd is a man who always has some dishonest but profitable scheme in mind. He is not the only one making schemes. Orange Povy (John Carradine) has plans of his own and he knows Kidd extremely well. He believes he can match wits with him.

Jose Lorenzo (Gilbert Roland) is another of the officers with his own agenda. And then there’s Adam Mercy (Randolph Scott), something of a mystery man and the object of much suspicion on the part of his fellow officers, and especially on the part of the Captain. Lorenzo and Mercy will also try to mach wits with Kidd. 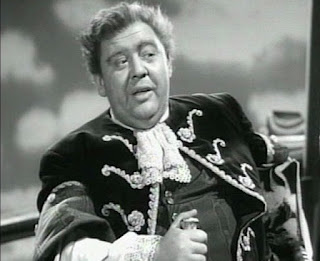 Things get more complicated after Kidd’s rendezvous with the Quedagh Merchant, a ship he is supposed to escort through the pirate-infested waters near Madagascar. The Quedagh Merchant is carrying treasure of immense value, and it is also carrying the beautiful young Lady Anne Dunstan (Barbara Britton). The challenge for Kidd is to get his hands on the treasure without appearing to have committed an act of piracy. He also has plans for Lady Anne, and he’s not the only one.

Captain Kidd keeps a list of names hidden in a secret drawer in his cabin. It’s a list of people who are or have been accomplices in his schemes, and who feel themselves entitled to a share of the loot. The list is distressingly long. It seems a great pity to have to divide the loot so many ways. It would be much safer, more convenient and more profitable if that list of names could be reduced to a more manageable level. Kidd has plans to do just this. 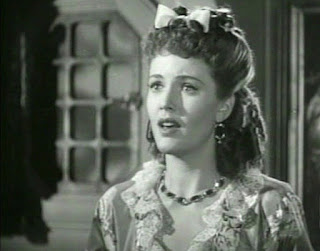 Charles Laughton is in magnificent form. This is overacting taken to the most delightfully extreme levels. He manages to be both horrifyingly amoral and oddly likeable, and also very very amusing. Kidd’s attempts to turn himself into a gentleman provide a good deal of fun. He has hired a valet, Shadwell (Reginald Owen) to teach him the finer points of gentlemanly behaviour. This proves to be quite a challenge for Shadwell.

The supporting cast is very strong, with John Carradine being wonderfully sinister.

Rowland V. Lee was a competent director and does a solid job despite having to work with a somewhat limited budget. With Charles Laughton in full flight there’s never the slightest danger of things becoming boring. The screenplay plays fast and loose with history but it gives Laughton the kind of dialogue he can sink his teeth into. There’s not a huge amount of action but there’s enough to keep the viewer’s interest. 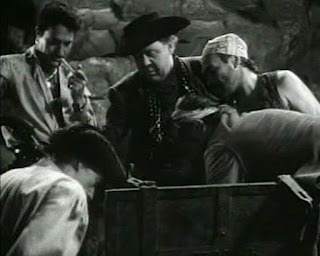 Captain Kidd is in the public domain and there are therefore a number of DVD releases of varying quality. I can’t comment on these discs since I caught this movie on broadcast television (with the print being in reasonable condition).

This would have been a pretty enjoyable pirate adventure anyway, with plenty of nasty plot twists and a gallery of colourful rogues. It’s Charles Laughton’s performance that lifts it to a higher level. For Laughton fans, or for pirate movie fans, it’s pretty much a must-see movie. Highly recommended.
Posted by dfordoom at 8:03 PM