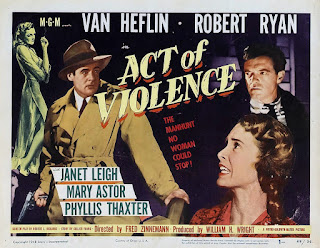 The 1948 MGM film noir Act of Violence belongs to the sub-genre of crazy WW2 vet noirs. It gets off to a very impressive start. A rather rumpled and rather surly guy with a bad limp (played by Robert Ryan) is stalking Frank Enley (Van Heflin). The limping man has a gun and it’s pretty obvious that he intends to kill Enley, but we have no idea why. The fact that we don’t know why adds considerably to the suspense and the brooding feel of menace.

We do have a few clues. Enley is a World War 2 vet and he was an officer. Given that the movie was made in 1948 it’s reasonable to surmise that the limping man served under Enley during the war and has a grudge against him, and he believes it’s a big enough grudge to be worth killing for.

Enley is seriously spooked so we can further surmise that he’s convinced the limping man really does intend to kill him. 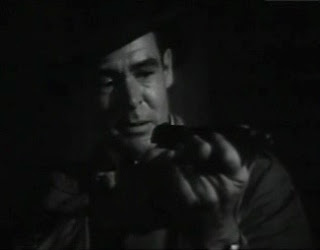 It’s a nicely effective rather minimalist opening sequence and director Fred Zinnemann is in no hurry to give us a full explanation, preferring to slowly build up the backstory by indirect means. We’re nearly halfway through the film before we get the explanation and even then we can’t be entirely sure what happened - we have two accounts of the crucial events during the war but neither account could be said to be coming from an impartial witness.

I’m being deliberately very vague about the plot because one of the things I like about this movie is that the two protagonists are introduced at the start and we draw certain conclusions about their respective characters. And then we find out things that force us to totally rethink how we feel about these two men. My feeling is that the less you know about the plot going into the film the more effectively this technique works. 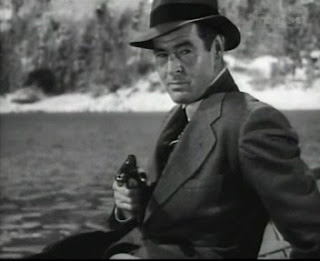 We are definitely in noir territory. Take a guy who’s a fairly regular guy but kind of weak morally or psychologically, the kind who’s likely to make one bad mistake because he’s trying to find the easy way out, then tighten the screws on him and watch him sink into the noir quicksand. I’m not going to tell you which of the lead characters this applies to but this guy really is sinking into that quicksand.

Robert Ryan was of course always the perfect choice if you wanted an actor to play  someone who was psychologically tortured, damaged and dangerous. In this film he exudes menace right from the start and there’s a frightening implacability about his stalking of Elney.

Van Heflin was also pretty good at playing troubled characters and Frank Elney most definitely qualifies as troubled. And tortured. And damaged. 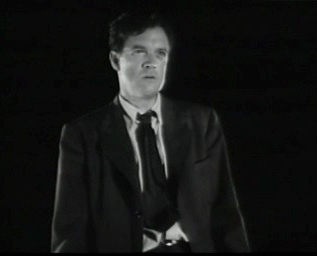 A very very young Janet Leigh plays Elney’s rather sweet but worried wife and her performance is quite effective. Mary Astor plays the world-weary and decidedly non-respectable Pat. I find most of Astor’s performances to be a bit odd but the strange thing is that more often than not they work.

I’ve never had a particularly high opinion of Fred Zinnemann’s work although I was very impressed by The Day of the Jackal. After seeing Act of Violence I’m inclined to think that Zinnemann was at his best doing dark moody suspense pictures. This movie starts out tense and that tension never lets up. 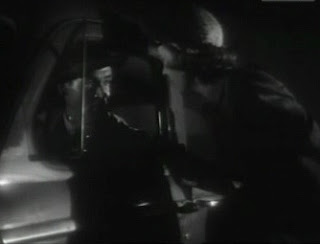 There’s lots of angst here and moral ambiguity as well. We have characters who do bad things but they don’t do them because they want to, they just can’t help themselves. So we have plenty of characteristic film noir self-pity as well.

Act of Violence was released as part of the Warner Home Video Film Noir Classic Collection, Vol. 4 and as a made-on-demand DVD in the Warner Archive series. I caught this movie on TCM so I can’t comment on the quality of the DVD releases.

Act of Violence is an emotional roller-coaster ride and it’s a full-blooded excursion into the noir depths. Very highly recommended.
Posted by dfordoom at 1:06 PM