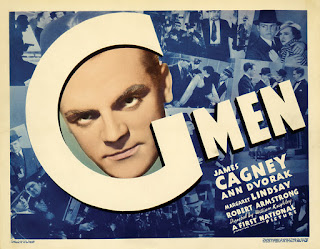 By 1935 the Hollywood studios had a problem. The Production Code was no longer going to allow them to make movies glorifying gangsters. This was going to be a very big problem indeed for Warner Brothers. Gangsters had been very good for Warner Brothers. The obvious answer seemed to be to switch the focus and make the cops who battled gangsters into the heroes. Thus we got movies like G Men, with James Cagney suddenly transformed into a square-jawed clean-living all-American hero. He still gets to be a tough guy but now he’s a tough guy for the US Government.

G Men was the start of another trend as well. It was the first of the great FBI propaganda movies. The FBI showed promise of being almost as profitable as gangsters.

Cagney plays Brick Davis. Davis is an honest lawyer (OK it’s a far-fetched concept but hey it’s only a movie) and he’s starting to figure that being an honest lawyer is a good way to starve. His buddy Eddie Buchanan (Regis Toomey) has been trying for some time to persuade Brick to join the Bureau. Eddie makes it sound like the equivalent of enrolling in a holy crusade against wickedness. Brick isn’t really interested. 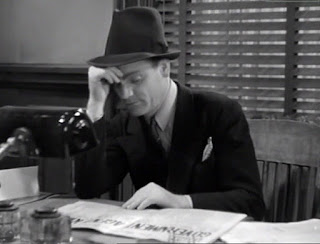 When Eddie gets rubbed out by some big-time hoodlums Brick changes his mind. Now he wants to join that holy crusade.

Seton I. Miller’s screenplay sets itself some interesting challenges. It seemed like a cool idea to make Brick a poor kid who’s made good but poor kids don’t get to go to law school so he’s been given a benefactor. Mac is a racketeer so he has plenty of spare change to send ambitious kids to law school. He’s a racketeer but he can’t be a bad guy because that would cast doubt on Brick’s status as noble selfless hero so Mac has been made into a really swell guy who really hates being a mobster (it’s such an awful life what with all that money and all those gorgeous dames and the fancy clothes and the swanky apartments and the fast cars and all the other nightmares associated with the gangster lifestyle). Mac just wants to get out of the rackets and be a regular decent guy.

Now the idea of giving the hero a gangster as his mentor and protector does add the possibility of some interesting moral ambiguity. 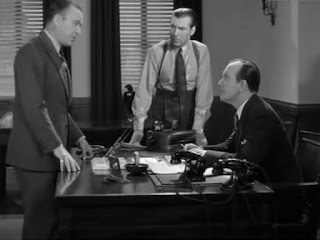 Veteran agent Jeff McCord (Robert Armstrong) is in charge of training new agents and if there’s one thing he despises it’s law school graduates with no police experience. He and Davis clash right from the start.

These are the very early days of the FBI, when the G-men were not even allowed to carry guns and had strictly limited powers. In the movie we see some agents gunned down followed by some extraordinarily hysterical demands for the government to change the laws to give the G-men sweeping powers and lots and lots of guns.

Davis has never given up on the idea of tracking down Eddie Buchanan’s killer and when he overhears a chance reference to a gardenia he thinks the trail is getting warm. Davis has vivid memories of a certain New York hoodlum who always wore a gardenia in his buttonhole. Davis’s quest for revenge gives the story the necessary personal angle. 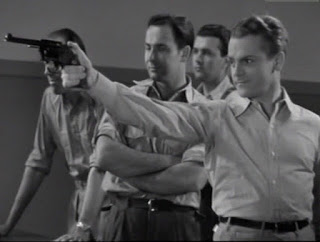 One thing the FBI movie did offer that attracted the studios was the high-tech scientific glamour of government laboratories using the very latest scientific crime-fighting techniques, and the 195 high-tech stuff is certainly fun.

The film’s biggest asset is Cagney. As usual he approaches the rôle with a maniacal intensity that could be off-putting but somehow he gets away with it. Cagney’s intensity seems genuine rather than contrived. He’s a fast-talking two-fisted hero and he’s at his most magnetic in this movie. 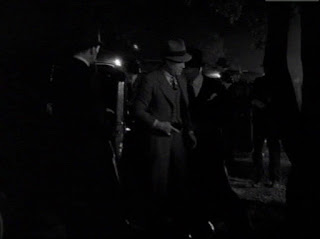 There are plenty of shoot-outs. The violence isn’t graphic but it’s pretty relentless. Director William Keighley keeps the story moving along like an out-of-control locomotive. If the intention was to prove that a cop-as-hero movie could be every bit as exciting as a gangster movie then that intention was achieved admirably. There are enough rounds of small arms ammunition expended to keep a small war going.

G Men has been released on DVD in Region 1. I saw the movie on TCM, and the TCM print is quite acceptable.

The screenplay is an endless succession of clichés but it’s all done with so much energy and style and Cagney has so much charisma that it doesn’t matter. G Men is a roller-coaster ride of thrills and action. Highly recommended.
Posted by dfordoom at 7:59 PM