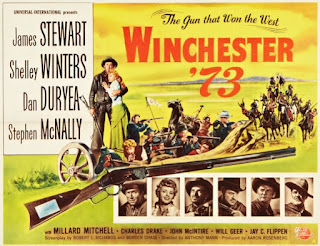 I used not to be a great fan of Hollywood westerns although I have been gradually developing a resect for the genre as I get older. Anthony Mann’s westerns have a certain reputation, a very high reputation, especially this one, and his entries in the film noir genre are pretty good, so Winchester ’73 sounded like it might be worth a watch. It was made at Universal in 1950.

Lin McAdam (James Stewart) and Dutch Henry Brown (Stephen McNally) both find themselves in Dodge City competing in a shooting competition. The prize is a Winchester Model 1873 rifle. But not just any Winchester rifle - this is a kind of Special Edition Winchester. President Ulysses S. Grant owns one of these very special Winchesters, and the Marshall of Dodge City (a guy by the name of Wyatt Earp) expresses the view that any man would give his right arm for this rifle. 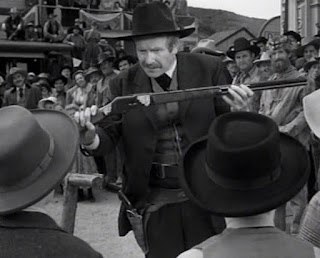 Wyatt Earp has other problems on his hands - keeping Lin and Dutch Henry from killing each other. These two are obviously nursing grudges against each other of stupendous proportions. After the competition Dutch Henry steals the rifle and heads off out of Dodge City with Lin in hot pursuit.

There are a number of sub-plots involving some rather colourful characters. Lola Manners (Shelley Winters) is a saloon entertainer who is being run out of Dodge City at the time Lin arrives. Lin tries to do the gentlemanly thing and intervene to help a lady but to no avail. 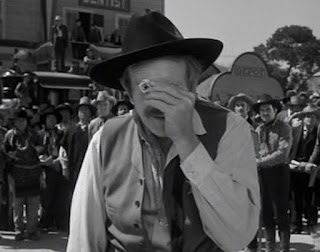 Lola reappears slightly later, on her way to her new ranch with her new husband. Unfortunately the Sioux are on the warpath and having just wiped out Custer’s 7th Cavalry at the Little Big Horn they’re in an aggressive mood. Lola and her husband are pursued by a war band and husband Steve abandons Lola to her fate. Luckily Lin and his buddy and faithful companion turn up at this moment and Lola is rescued. Well sort of. The three take refuge with a small troop of US Cavalry but this troop is about to be wiped out by an even bigger Sioux war party. But all is not lost and the cavalry now have three extra fighters (including Lola who is a feisty kind of gal and knows how to handle a gun).

The destinies of Lola and Lin seem to be strangely entwined. Soon after Lola hooks up with notorious outlaw Waco Johnny Dean (Dan Duryea), who just happens to be planning a bank robbery with none other than Dutch Henry. In fact the fates of all the major characters will converge as events move towards the final showdown between Lin and Dutch Henry. 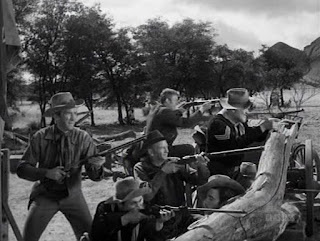 This was one of the earliest appearances of the dark and obsessed side to Jimmy Stewart, a side that would be used to brilliant effect by Hitchcock in Rear Window and Vertigo. Like the characters he played in those films Lin is neither a simple hero nor an actual villain, but he’s definitely dangerously obsessed. Stewart always shone in these darker roles and this is no exception. All the actors are good, with Dan Duryea being (as you’d expect) a chilling but highly entertaining bad guy.

As she so often did Shelley Winters goes very close to stealing the picture from Stewart. And like Stewart’s character Lola is rather ambiguous. She seems to be a woman of dubious moral reputation but she has considerable strength of character. She’s no shrinking violet but she’s no mere femme fatale either. 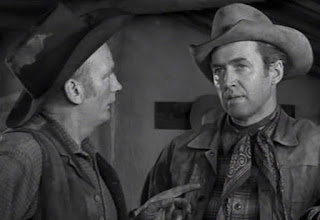 The Winchester rifle itself becomes a character in the movie, changing hands many times and somehow leading everyone who possesses it to their destiny, for good or ill.

Anthony Mann directs with the energy and flair that he brought to his best movies in the film noir genre.

Winchester ’73 is a classic revenge western with some twists, superbly acted and it’s worth a look even if you’re not a big western fan. Highly recommended.
Posted by dfordoom at 5:11 PM