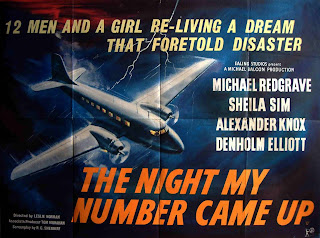 The Night My Number Came Up is a 1955 Ealing Studios production and it’s one of those odd little movies that they don’t make nowadays (and more’s the pity). It’s a kind of semi-paranormal vaguely supernatural psychological suspense aviation thriller.

Air Marshal Hardie (Michael Redgrave) and his aide Flight Lieutenant McKenzie (Denholm Elliott) have just flown in to Hong Kong in an R.A.F. Dakota. A Naval officer, Commander Lindsay (Michael Hordern), was on the flight as well. Hardie and McKenzie are to fly on to Tokyo on the following morning. 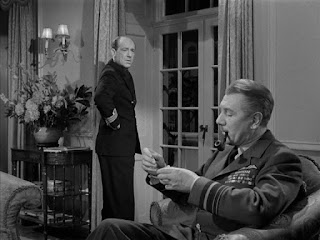 Of course it’s all nonsense. The dream involved a Dakota but the Air Marshal is actually continuing his journey to Japan on board a Liberator. And there will only be two passengers - in the dream there were eight passengers. So of course the dream is nothing at all to worry about. All a lot of silly superstitious rot.

The night before the flight to Tokyo diplomat Owen Robertson (Alexander Knox) is informed that his presence is required in Tokyo immediately, along with diplomatic bigwig Lord Wainwright and his staff. And they won’t be flying in a Liberator after all. They’ll be flying in a Dakota. Just like the one in the dream. But there will only be six passengers. Until at the very last moment two more passengers are added. Now there are eight passengers. And one of them is an attractive young woman. It’s all exactly as in the dream. 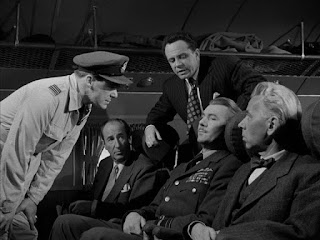 The lead-up is done is a nicely low-key way. No-one is at all worried by the dream. If you start believing in dreams soon you’ll be believing in all manner of superstitious tommy rot. Englishmen in the 20th century don’t put any store by superstition. It’s all just a coincidence. Mr Robertson isn’t really worried at all, even if he does order a large brandy just before take-off.

To increase the tension there are actually two flights. The Dakota will fly first to Okinawa and then refuel and fly on to Tokyo on the following day. This split journey gives the passengers lots of time to worry and to brood. Which they do.

This is a slow-burning suspense movie and while we’re waiting for the fatal flight (or the flight that might be fatal if the dream is true) the main interest is provided by watching the effect the dream has on the passengers, and the effects that the passengers then have on each other. Long before the aircraft is due to take off everyone who is going to be making the flight knows all about the dream and they’ve had a long night to think about it. 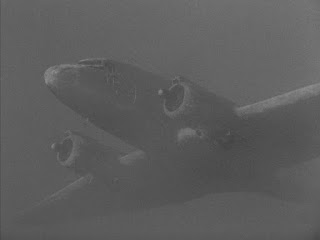 The one thing Air Marshal Hardie is grateful for is that nobody told the pilot about the dream. If you tell a pilot something like that it can have a very bad effect in a crisis. He can start to think that his number’s up and there’s nothing he can do about it. But as long as the pilot doesn’t know about the dream it’s alright. Except that someone did tell the pilot.

The build-up is slow and deliberate and intentionally so. And it’s very effective. And when things do start to get scary and exciting they do so in a big way.

This movie certainly has a very strong cast. All the cast members perform splendidly and all are careful to keep their performances on the low-key side. Lots of stuff upper lips disguising lots of inner turmoil.

Owen Robertson is already starting to fall apart. He’s terrified of flying at the best of times and now he’s well and truly spooked. Flight Lieutenant McKenzie is not in the best of shape either. He had been a notable fighter ace in the Battle of Britain but had had a major nervous breakdown and had to be taken off flying duties. He recovered from the breakdown, but he has perhaps been left with slightly shaky nerves. Those nerves are getting shakier as the time for take-off gets nearer. Air Marshal Hardie is adamant that he is not worried at all but we have reason to suspect that he’s whistling in the dark. 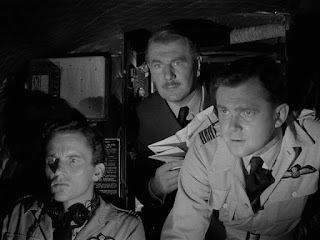 Nobody wants to believe in the dream because really it’s all so silly but what can’t be denied is the uncanniness with which events seem to conspire to bring about precisely the situation of Commander Lindsay’s dream. Even the most rational person can start thinking along superstitious lines given the right stimulus.

There are obviously lots of flying sequences and they’re exceptionally well done and quite convincing.

The Studiocanal Region 2 DVD is barebones but the transfer is extremely good (the movie is in black-and-white and in the 1.33:1 aspect ratio).

The Night My Number Came Up is an offbeat but very tense little thriller which achieves a very effective sense of the uncanny. An excellent film. Highly recommended.
Posted by dfordoom at 9:46 PM