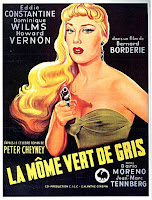 Eddie Constantine is today best-known for his role as Special Agent Lemmy Caution in Jean-Luc Godard’s Alphaville. In fact he played FBI agent Lemmy Caution is a long series of French action thrillers in the 1950s and 1960s. One of the earliest of these films, dating from 1953, is Poison Ivy (original French title La Môme vert-de-gris).

Lemmy Caution was created by Peter Cheyney who was unusual among English crime novelists in being an adherent of the hardboiled style, although it was actually a wildly over-the-top and exaggerated version of that style. Cheyney's books (such as I'll Say She Does and Never a Dull Moment) were extremely popular in Britain and even more popular on the Continent.

The very successful series of Lemmy Caution movies made in France in the 50s made gravel-voiced American-born Eddie Constantine a major European film star.

Poison Ivy opens with some punk meeting with an accident (an accident of the fatal kind) in a bar in Casablanca. Before he croaks he talks about two million dollars in gold and something about a place called Mayberry.

This information filters its way to Washington and it interests the FBI very much. The Mayberry is a ship and it is indeed carrying two million dollars worth of gold bullion en route to an African country. Special Agent Lemmy Caution is soon on his way to Casablanca. 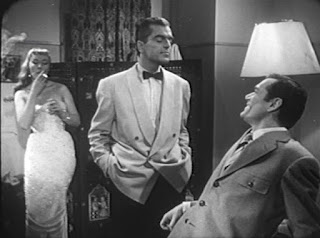 His hunt for the gang of bullion thieves takes him to exotic locations such as Casablanca and Tangiers, and to various seedy waterfront dives and bars. Lemmy has no problem with that. He is always happy to have a whisky, just to be sociable. Or even several whiskies. In fact as many whiskies as it takes.

In these bars he meets lots of hardboiled no-good dames, which is OK because Lemmy rather likes hardboiled no-good dames. And the dames like the craggy-featured tough guy Lemmy as well. Lemmy’s old mother used to tell him that there ere two types of women in the world, the ones who wanted to save men and the ones who wanted to ruin men. Lemmy definitely prefers the latter. 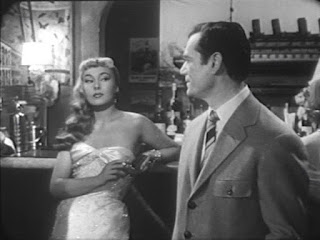 In between drinking whisky and chasing dames and getting into fist fights Lemmy manages to get himself captured by the gang, led by the smooth-talking Rudy Saltierra (played delightfully by Swiss-born cult movie icon Howard Vernon).

Lemmy has no real doubt about the identity of the bad guy. His problem is that he has three corpses to account for and although he knows the murders are connected he doesn’t know what the connections are. And he knows the bullion is the target but he has no idea how the gang are intending to cary out the heist.

The movie features a classic film noir femme fatale in the person of the glamorous night-club singer Carlotta de la Rue. She is played by Dominique Wilms, an odd but fascinating exotic beauty who was born to play dangerous bad girls. It’s something she does with a good deal of style. Her performance is a definite highlight and she has great chemistry with Eddie Constantine. She also appears in several other Eddie Constantine movies. 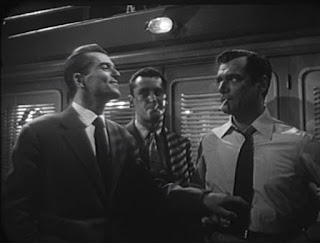 As for Eddie Constantine, no-one would claim that he’s a good actor in a conventional sense but he’s perfect for this kind of rôle, he knows exactly what is expected of him and he delivers the goods.

Poison Ivy is clearly inspired by American film noir and hardboiled private eye movies, but it’s also influenced by comic-books and, I suspect, by movie serials as well. In fact it’s inspired by all the many varieties of deliciously trashy American pulp culture that the French adore so much. This is an outrageously pulpy movie, and it has a very slight camp sensibility (and being a French movie I’m inclined to think that this is deliberate rather than accidental).

While this is a B-movie in spirit it it was presumably made on a reasonably generous budget since it includes some nice North African location shooting. 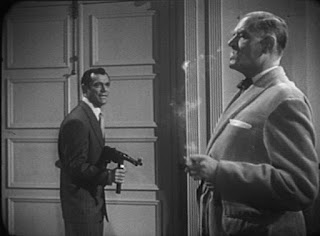 There are lots of clichés in the plot but that’s the point of the plot. The fun comes from knowing that the movie is going to follow the conventions of the genre. We look forward to these familiar elements. There is for example the scene in which the bad guy, instead of just killing the hero as a sensible villain would do, proceeds to explain his whole criminal scheme to the hero in intricate detail. It’s a cliché but it’s what you expect in a movie serial or a B-movie. Writer-director Bernard Borderie clearly has a deep understanding of the hardboiled private eye genre.

As far as I know the Lemmy Caution movies are only available on DVD-R from Sinister Cinema. In this case the picture quality is perfectly acceptable although the sound leaves just a little to be desired at times.

Poison Ivy is highly recommended to anyone who loves two-fisted square-jawed wise-cracking heroes and glamorous no-good dames.
Posted by dfordoom at 5:52 PM