I’m a great fan of Robert Siodmak’s films noirs such as Phantom Lady, and I loved his wonderfully southern gothic Son of Dracula. I remember liking The Spiral Staircase, made in 1946, and it seems like one of those movies that is worth a second look. In fact it’s worth seeing just for Nicholas Musuraca’s cinematography which is, as always, stunning. The combination of Musuraca’s film noirish lighting and the sumptuous Edwardian sets (the movie is set in 1916) gives the movie a decidedly gothic feel.

The situation of two step brothers living in the shadow of their dead father, a father who despised them, plus the bed-ridden matriarch of the family (played by Ethel Barrymore) enhances the gothic sensibility. The past cannot be escaped. Professor Warren (George Brent) and Steve Warren (Gordon Oliver) are both weaklings in their own ways and they dislike each other intensely. 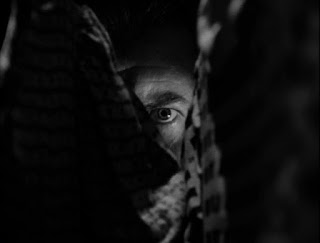 A series of murders has terrorised the district. The victims have all been women and all with some form of weakness or affliction. Dr Parry (Kent Smith) is naturally concerned for Helen (Dorothy McGuire) who is mute, apparently as a result of some trauma in the distant past. Dr Parry has the idea he can cure her, and he’s obviously in love with her. Dr Parry has been called in to treat old Mrs Warren, a challenge for any doctor. The old lady keeps telling Helen to leave, to get away, that she is in danger. Is the killer outside trying to get in, or is he already inside?

To be honest I don’t think most people will find the mystery to be all that difficult to penetrate. In any case I think it’s an advantage in a suspense movie to know who the bad guy is, or at least to have a very strong suspicion. It makes the audience more anxious for the heroine’s safety (and this is definitely a Woman In Peril film). Of course it all depends on whether you’re trying to make a mystery film or a suspense film. This particular film seems to be trying to be both (which is also very much true of the source novel). 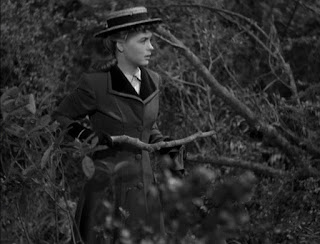 The actual plot is secondary to the atmosphere that Siodmak creates, a very unhealthy atmosphere. It’s the way Siodmak tells the story that matters, and he tells it with some marvellous visual touches. At this point in time there was probably no better cinematographer in Hollywood than Nicholas Musuraca. He knows when to go over the top visually but he also knows when to build the gothic atmosphere gradually and subtly.

The very solid cast certainly helps. Dorothy McGuire does very  well in a part that obviously doesn’t allow her to speak. George Brent was always likeable and sympathetic even when, as here, he played weak or morally dubious characters. Ethel Barrymore, being a Barrymore, overacts. But being a Barrymore she does it well. 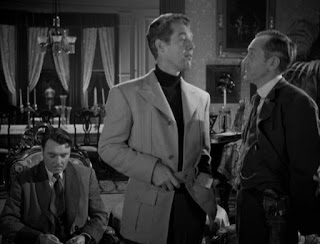 Elsa Lanchester is great fun as the good-natured but eccentric housekeeper who likes a drop or two of brandy when she can get it.

There’s a decidedly diseased ambience to the Warren household and it’s not at all difficult to imagine that the crazed killer might be a member of this household.

The Spiral Staircase was based on Ethel Lina White’s 1933 novel Some Must Watch and it’s a fine example of the ability of a great film-maker to take a very mediocre novel and turn it into a great movie. Overly melodramatic plotlines tend to work a lot better on film than in books and the whole “it was a dark and stormy night” thing seems a hoary old cliché on the printed page. In a movie it’s still a cliché but it can still be made to work. 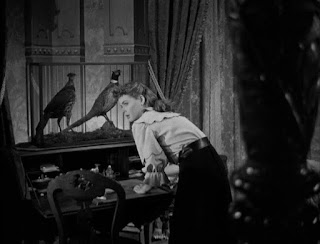 Ethel Lina White was a representative of the Had I But Known school of crime fiction which is excruciating in print but can make for a very successful suspense film.

Mel Dinelli wrote the screenplay which fixes the major faults in White’s original story. Dinelli did some fine things as a writer about this time, most notably The Reckless Moment and House by the River but also Beware, My Lovely which I think is rather underrated.

The DVD release includes no extras at all, but is fairly inexpensive and the movie looks superb. If you have a taste for film noir or gothic movies you need to see this movie. The Spiral Staircase is highly recommended.
Posted by dfordoom at 6:54 PM