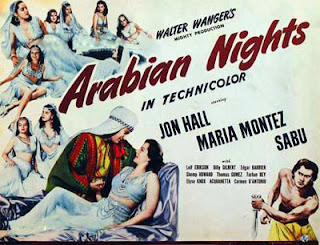 Arabian Nights was Universal’s first attempt at a blockbuster movie made using the three-strip Technicolor process. It was a major hit on release in 1942 and it spawned several follow-ups set in the world of Islam. Of course a Universal blockbuster was not going to have the budget of an MGM blockbuster but Universal were very good at making cheap movies look classy and visually arresting.

To say it’s based on the classic tales of The Thousand Nights and One Night is perhaps a bit of an exaggeration. Inspired by these tales might be closer to it. Loosely inspired. In fact producer Walter Wanger cheerfully admitted that it was to a large extent a western with camels. That’s true up to a point, but it has the atmosphere and exoticism of the East and that atmosphere was a major factor in its success. 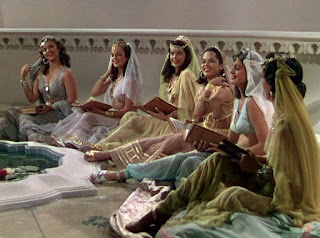 John Rawlins directed. He was a competent B-movie director and this is one of his few really major productions.

The Caliph Haroun-Al-Raschid (Jon Hall) has put down a revolt by his wicked brother Kamar (Leif Erickson). Kamar wanted his throne but more than that he wanted the dancing girl Scheherazade (Maria Montez). And Scheherazade (listed incorrectly in the credits as Sherezade) does not want to a dancing girl. She wants to be a queen. Kamar was captured but escapes and Haroun-Al-Raschid, badly wounded, is saved from death by the acrobat Ali ben Ali (Sabu). He is nursed back to health by Scheherazade.

Now Haroun-Al-Raschid has to find a way to survive and eventually regain his throne, and of course he has now fallen in love with Scheherazade. They both end up being captured by slavers and have the usual adventures. Kamar is determined to find Scheherazade and he’s willing to go to any lengths to do so. There’s lots of palace treachery, and Haroun-Al-Raschid Scheherazade have lots of narrow escapes. The faithful Ali and a motley assortment of carnival types prove to be vital allies. 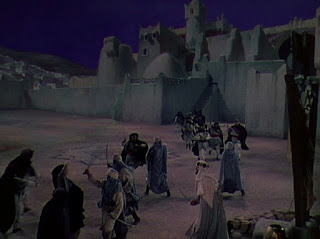 Maria Montez was already carving out a niche for herself as a B-movie queen when Arabian Nights turned her into a bona fide star. Montez was a Spanish actress (although born in the Dominican Republic) and her exotic beauty was her major asset. Some might be unkind enough to say it was her only asset but while she was no great actress she was quite adequate for the kinds of rôles she played. In fact she was absolutely perfect for such rôles.

Jon Hall was a bit exotic as well, being half-Tahitian. He was pretty much a male version of Maria Montez - very limited as an actor but a competent adventure movie leading man.

Sabu was the first Indian actor to become a major movie star in the West. And he became a very big star indeed, initially in big budget adventure films for Alexander Korda in England and then in Hollywood. Sabu’s major asset was that he was not only remarkably athletic, he could also act. 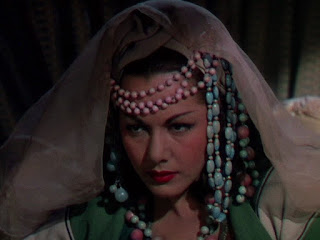 The supporting cast has its share of exotics as well, including the Viennese-born half-Turkish half-Jewish Turhan Bey, another actor ideally suited to these sorts of pictures.

The cinematography by Milton R. Krasner (who later won an Oscar and photographed  some pretty spectacular epics) is a definite bonus. The art direction is also excellent. I love the pool in the harem - it looks like a kind of fantasy Club Med.

Of course this being the 40s there has to comic relief, which is provided by Aladdin (constantly looking for his lost lamp) and Sinbad (constantly boring people with his stories of his adventures as a sailor). Casting Shemp Howard (of the Three Stooges) as Sinbad the Sailor is something that could only happen in Hollywood. Since this is clearly a movie intended to appeal to family audiences one can’t complain too much about the comedy. 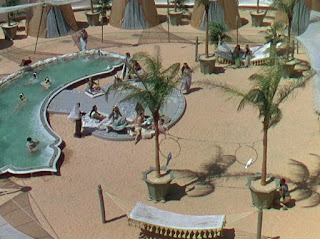 The Universal Cinema Classics DVD looks splendid. The only extra is an introduction by Robert Osbourne.

Arabian Nights is a B-picture with a bigger budget than usual and that’s why it succeeds. It has the charm of an adventure B-picture but it looks fairly impressive. It’s quite content to provide spectacle and harmless entertainment. It’s not trying to tell us anything profound about the human condition. As well as being commercially successful it picked up four Oscar nominations.

Arabian Nights is a entertaining blend of action, comedy and romance in a romantic fairytale setting. Highly recommended.
Posted by dfordoom at 6:08 PM