The Jerry Cotton novels were a popular and immensely prolific series of German pulp crime novels dealing with FBI agent Jerry Cotton and his battles against racketeers in New York City. They began publication in 1954 and were still going strong in the early 21st century.

Inevitably the series spawned a series of film adaptations. The first of the eight Jerry Cotton movies was Manhattan Night of Murder (Mordnacht in Manhattan) which was released in 1965.

They’re fun for many of the same reasons that the German Edgar Wallace krimi movies of the 60s are fun. Those movies gave us a delightfully odd German view of how Scotland Yard operates. The Jerry Cotton movies give us an equally off-kilter German view of the FBI and American organised crime. They are however much more hardboiled than the Edgar Wallace movies, with some obvious film noir influences (which is amusing since American film noir was itself heavily influenced by German movies of the 20s and early 30s). 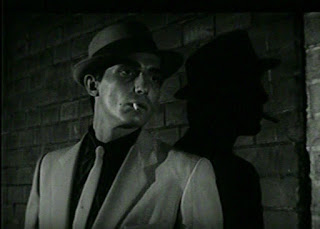 Manhattan Night of Murder deals with a protection racket run by a gang known as the Hundred Dollar Gang. One of their victims is Giuseppe, who runs an Italian restaurant. In the course of a heated exchange with members of the Hundred Dollar Gang Giuseppe is shot and killed but there’s some doubt as to who pulled the trigger.

The only witness to the murder is a young boy. Unfortunately this circumstance is known to the gang so obviously the boy is likely to a target.

There’s also a charming young lady named Sophie who runs a gas station. Jerry thinks he can use her to set a trap for the hoodlums. 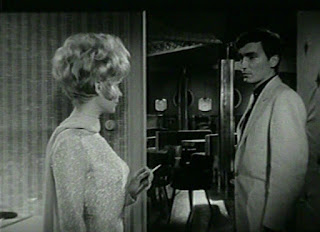 This is a very ruthless gang. If one of them is identified by the cops the others kill him. The beautiful but dangerous Wilma de Loy (Sylvie Solar) seems to be one of the key figures in the gang. She runs the Goldfish Club, a night spot whose gimmick is a tank full of rather attractive mermaids (who can be persuaded to get friendly with the customers). A very cold  hard character named Alec seems to be giving the orders but the FBI is sure he’s not the real brains behind the outfit.

This is very much what you expect from the German film industry at this period - it’s a B-movie with lots of energy and a great deal of style. If you enjoy the Edgar Wallace krimis or the Dr Mabuse movies you’ll know what to expect. Mercifully this one has none of the comic relief that is such an unfortunate feature of many of the Wallace flicks. There are explosions and lots of general mayhem, cool car chases, a getaway biplane (so much better than a getaway car) and plenty of fight scenes (the one amongst the cardboard boxes is quite clever as is the one at the coal processing plant). 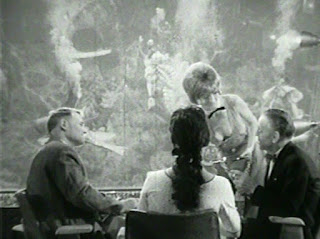 It has to be said that George Nader isn’t the world’s most exciting actor but he’s quite adequate. That’s probably a fair summation of the cast in general. Slobodan Dimitrijevic does make an effectively chilling heavy and Sylvie Solar makes a fairly reasonably bad girl.

All the action takes place in New York and of course it was entirely filmed in Germany. It’s not ever going to convince you that you’re actually in New York but the unconvincingness of the setting adds to the movie’s charm. The Germans just didn’t care. If they wanted a movie set in London or New York they’d happily shoot it in Hamburg. Add some rear projection and some stock footage and you’re fine. They just got on with the job of making the movie and making it as entertaining as possible. 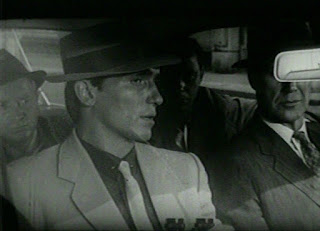 As far as I know the Sinister Cinema DVD-R is the only way to get to see this movie if you don’t speak German. Their release is OK. Image quality is fair with a bit of minor print damage at times. Sound quality is OK. The English dubbed version is of course the only option offered.

Manhattan Night of Murder isn’t great cinema. It’s low-budget pulp cinema. The plot is slightly crazy at times and doesn’t always make too much sense (which is typical of German movies of the 60s). It does however have a certain distinctive flavour and it is rather enjoyable. Recommended, especially if you have a taste for mildly quirky European crime thrillers.
Posted by dfordoom at 8:24 PM