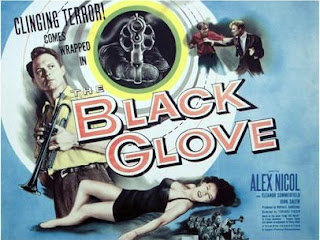 The Black Glove, a 1954 release, is one of the movies released by VCI/Kit Parker Films in their Hammer Noir series. In truth most of Hammer’s early 50s crime movies were at best marginally noir but on the other hand they were often quite decent B-features.

The Black Glove opens as American jazz trumpeter James Bradley finishes the first set on his European tour. He’s performing in London and he should be going to be a celebratory party afterwards but he’s exhausted so catches a cab back to his hotel. On the way he gets sidetracked by jazz singer Maxine Halbard (Ann Hanslip). She offers him a home cooked meal. It seems likely that she has more than cooking dinner for him on her mind.

Bradley is a jazz musician so he’s a Cool Guy. Maxine is the female equivalent. She looks like the kind of girl who reads French existentialist novels. They hit it off pretty well. 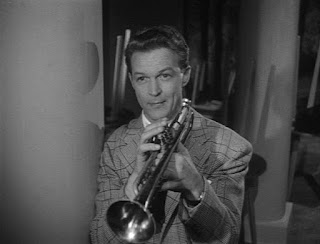 Bradley is a bit disturbed when he wakes up the next morning to find a policeman wanting to interview him in connection with a murder.

One of the clues the police have is a record. It’s not a commercial pressing but some kind of demo record. It’s just vocals and piano and every jazz aficionado they’ve played it to assures them that the piano player has to be Jeff Colt (Arthur Lane). But Jeff Colt is adamant he had nothing to do with the record.

Bradley is following up clues of his own. All the leads involve music or musicians, or record producers, or have some connection to music. 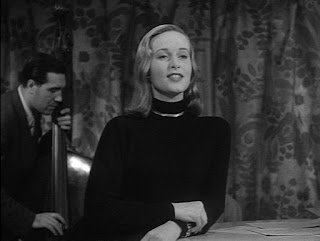 This is very much a jazz crime thriller so it probably helps a lot if you love jazz and you think jazz musicians are ultra-cool. I don’t like jazz very much and I don’t think much of jazz musicians. On the other hand if you do like that scene and if smoky basement jazz clubs and jam sessions and night clubs appeal to you then it has to be admitted that The Black Glove does those things pretty well. This is very much a jazz murder mystery.

There’s not much in the plot that is overtly film noir but there’s a definite film noir atmosphere. The characters in this movie are the kinds of characters who inhabit the film noir world - failed singers, down on their luck musicians, unscrupulous record producers, pushy agents, lots of desperate people who are likely to do desperate things. They’re all just one lucky break away from the big time, and just one unlucky break away from skid row. And that atmosphere of desperation is done very well indeed. 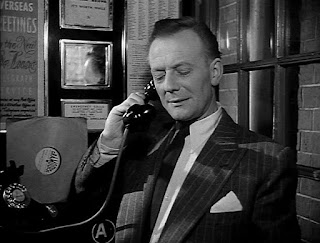 The ending is very much in the tradition of the golden age detective story, with the detective (or amateur detective in this case) bringing all the suspects together to explain how the murder was carried out and to point the finger at the guilty party. Apart from being a cliché this kind of ending seems a bit wrong for this film. The problem seems to be that the movie is structurally a pretty routine murder mystery but stylistically it’s trying to be a frenetic and exciting jazz-fuelled crime thriller. The busy jazz soundtrack is actually an effective way to compensate for a low budget, and it’s also a good way to distract attention from any plot weaknesses.


Alex Nicol is a reasonably effective lead. The supporting cast is exceptionally good. 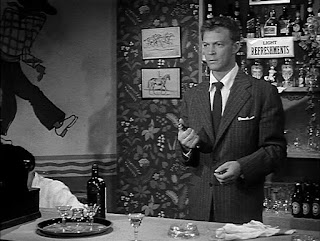 Terence Fisher would go on to be a renowned director of gothic horror films for Hammer but in the early 50s he helmed a lot of crime B-movies for them, some of which were pretty good.

This movie is released, paired with Deadly Game, as Hammer Film Noir Double Feature Volume 6. The transfer is pretty good.

The Black Glove is a solid very well-made noir-flavoured murder mystery B-feature. If you love jazz-fuelled crime thrillers then you’ll definitely want to check this one out. If you just like good crime B-movies you’ll find it quite enjoyable as well. Hammer’s early crime movies are very underrated. Highly recommended.
Posted by dfordoom at 10:14 PM