The Small Voice (AKA The Hideout) is a 1948 British crime thriller that is a bit more complex than the usual run of such films.

Playwright Murray Byrne (James Donald) and his wife Eleanor (Valerie Hobson) are quarrelling. Which is what they do most of the time. It’s not that they’re no longer in love. They just can’t seem to live together. Murray lost a leg during the war and he’s never quite recovered his confidence. He feels like half a man, all that sort of thing. And Eleanor has a lot of male admirers. She’s an actress and a glamorous one. Male admirers come with the territory. She has no intention of being unfaithful but she can’t convince Murray of that. And eventually Murray’s self-pity will drive her into the arms of another man. Eleanor wants to get out before that happens. She’s decided to leave him. Things are pretty tense as they drive home from the railway station.

They’re about to get a lot tenser. Murray and Eleanor are about to encounter three desperate armed fugitives who killed a policeman. Now their car has crashed and they need a place to hide out. 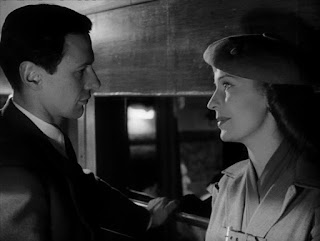 Boke (Howard Keel) is the ringleader who masterminded an escape from a military prison, along with Frankie and the slightly simple-minded Jim. The three fugitives hold the Byrnes hostage in the Byrne’s cottage but there’s a complication. In the other car involved in the accident were two small children. Frankie and Jim decided to bring them along to the cottage. They might be desperadoes but they’re not callous enough to leave two terrified children behind, and they’re certainly not cold-blooded enough to kill the children. And one of the kids is sick. Real sick.

Now the battle of wills starts. Murray thinks that being a playwright specialising in plays about crime he can break Boke’s spirit. Boke thinks he can break Murray’s spirit. Eleanor thinks she can uncover some basic humanity in Boke and persuade him to save the sick boy. It all works because of the nicely understated performances, and because of the well-crafted script. 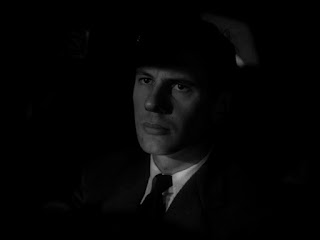 But the hostage drama is only part of what’s going on. There’s also the marriage between Murray and Eleanor, a marriage that is not merely headed for the rocks but has already hit them. Now they’re going to have to depend on each other for a while at least. Eleanor is not sure if she can depend on Murray, and Murray is not sure about that either. But it’s not just their own lives on the line but a child’s as well.

Of course there’s tension between the fugitives as well. A policeman was killed. Someone is going to hang for that, but it was Boke who pulled the trigger so why should the other two swing for it as well? And there’s the race against time element. The boy has meningitis. Without treatment his chances of survival are very slim and if he dies then Boke’s accomplices can be quite certain of keeping an appointment with the hangman. 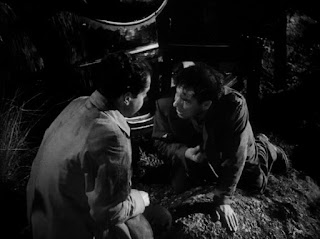 James Donald’s natural seriousness as an actor stands him in good stead here. Murray is a humourless prickly kind of character. He’s a character we grow to respect, rather than one we like immediately. Valerie Hobson has the right combination of glamour and strength of character to make Eleanor convincing. Howard Keel, in a rare non-singing rôle, brings a brooding intensity to Boke.

There’s some interesting subtle sexual tension between Boke and Eleanor. The relationship between Murray and Eleanor is always believable. They both behave unreasonably at times but no matter how exasperated they are with each other they’re also obviously still in love even if their chances of repairing their marriage seem hopeless. 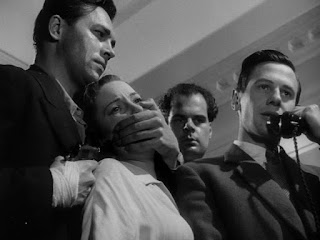 Network’s Region 2 DVD is full frame (the movie was shot in the (4:3 aspect ratio). As usual there are no extras and as usual the transfer is extremely good.

So we have here a taut suspense thriller laced with emotional drama and both elements work very successfully. Like so many British crime films of this era it’s a very well-made little film. Is it good enough to qualify for neglected gem status? I think it is. Therefore The Small Voice is highly recommended.
Posted by dfordoom at 1:45 PM