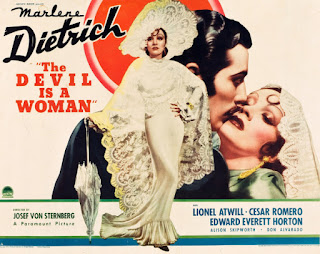 It’s also of course, like the other five movies, an expression of von Sternberg’s particular aesthetic principles. He described the previous film, The Scarlet Empress, as “a relentless excursion into style” and that pretty accurately describes all the von Sternberg-Dietrich movies. While Dietrich was a fine actress she was not in these movies to act - she was there simply to be Marlene Dietrich, to be the centrepiece of a visual extragavanza. 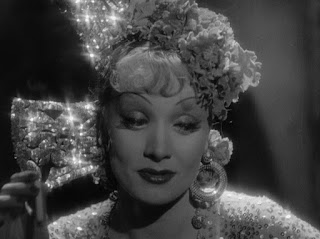 The movie takes place in southern Spain during Carnival. Young revolutionary Antonio (Cesar Romero) has met a fascinating woman. He then runs into his old friend Don Pasqual (Lionel Atwill), a middle-aged army officer. Don Pasqual knows this fascinating woman as well. She ruined his life. She really is a devil in the form of a woman. Don Pasqual warns Antonio to keep well clear of her but as we will see no man who falls under the spell of Concha Perez (for that is the lady’s name and she is of course played by Marlene Dietrich) can resist her. The more she hurts them, the more devoted they become. 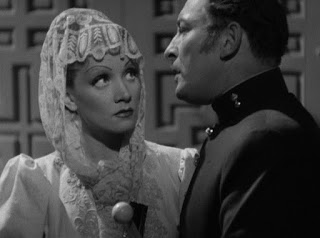 Don Pasqual tells the story of his own involvement with her in a series of flashbacks. His masochistic longing for her is all the more tragic since he is a man of the world and he knows that she will play with him for a while and then cast him aside. But he keeps going back for more. He is not the first man to suffer at Concha’s hands, and as we will also see he will not be the last.

This story could have been approached as an outrageous sex comedy. While there is plenty of humour this is not quite a comedy. It’s not quite a tragedy either. Perhaps that’s the point. Sexual desire can make us clowns or tragic heroes, and sometimes it can make us both at the same time. It’s a farcical melodrama, or a melodramatic farce. 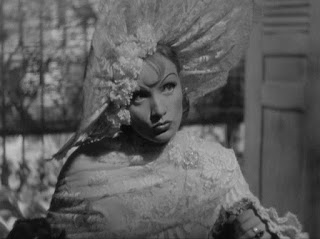 Concha is both pure evil and at the same time an adorable sex kitten. Dietrich plays the rôle superbly. She also looks absolutely stunning and her costumes are astounding. Lionel Atwill gives one of his finest performances (it may even be his best performance), managing to make Don Pasqual both dignified and ridiculous. Cesar Romero is also excellent. Edward Everett Horton plays the governor, another of Concha’s victims, and while he usually provided comic relief there is a serious edge to his performance here as well.

These are very flawed characters but it’s difficult to judge them too harshly. It’s even difficult to be too harsh on Concha. She is what she is. To disapprove of her would be to disapprove of sexual desire - it’s just in the nature of that desire that it brings joy and destruction. Her victims offer themselves willingly to be emotionally tortured.

Of course to a large extent it’s an opportunity for von Sternberg to indulge is aesthetic excess, which he does to extraordinary effect. 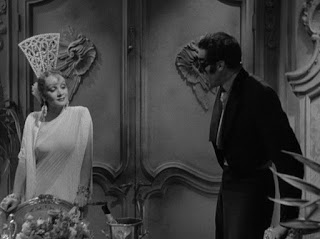 Not only do have characters wearing masks, we have whole scenes that take place behind visual barriers - lattice-work screens, iron grilles, fences, screens of trees and in some cases sheets of rain. This gives the movie a certain detachment which was clearly deliberate.

This movie was released on DVD as part of the Marlene Dietrich Glamour Collection five-movie set (and a great set it is) and it looks superb.

The Devil is a Woman was not a success at the box office. It was just too odd for audiences at the time, being neither a straightforward melodrama or romance or comedy but instead being all those things at the same time. Concha derives too much enjoyment from her cruelties, and her victims submit too willingly, for audiences at the time to approve of any of the characters. And it’s a movie that is just too wildly different from conventional Hollywood movies. It is however, in its own way, a masterpiece and is very highly recommended.
Posted by dfordoom at 2:27 PM