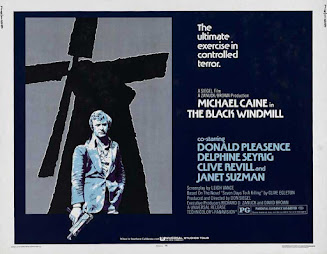 Michael Caine starring in a Don Siegel-directed spy thriller sounds quite promising. With Donald Pleasence in the cast as well The Black Windmill should have been a surefire winner. In fact this 1974 British-made film flopped, and the reason it flopped is that it’s just not all that good.

Caine plays Major John Tarrant, an MI6 operative trying to infiltrate a gun-running racket. His son is kidnapped and the ransom is just over half a million pounds, in uncut diamonds. The exact amount happens to be precisely equal to the value of uncut diamonds that Tarrant’s boss Harper (Donald Pleasence) has just bought. Those diamonds were to be used as bait to catch the gun-runners. It’s obvious there has been a very very serious security leak.

John Tarrant doesn’t give a damn about the security leak, he just cares about his son.

When Tarrant figuresout that the government is not going to pay the ransom he goes rogue. He’s going to get his kid back even if he has to steal the diamonds from MI6 headquarters, which is exactly what he does. He sets off on a one-man rescue mission.

Tarrant also figures out that he’s been well and truly set up to look like a traitor anyway, so there’s no reason for him to worry about breaking a few more laws. This is a bit of a weakness in the movie - there’s no inner conflict in this character at all. We never have any doubt as to what he’s going to do next and we never have causeto question his motives or his loyalty. In fact there’s no real psychological conflict of any kind in this movie. It’s a Boys’ Own Paper spy story.

Tarrant is an ice-cold professional who appears to have no emotions whatsoever. That might have made him an interesting protagonist in a certain type of cynical spy drama but it doesn’t come off in this film which is really an utterly conventional thriller, which needs a hero the audience can care about. Michael Caine was capable of more than this but the script gives him nothing to work with and he pretty much phones in his performance (which he was inclined to do if a movie didn’t grab his interest). The movie has none of the cleverness and wit and slightly offbeat quality of Caine’s Harry Palmer spy movies and his performance here lacks the magic that he brought to Harry Palmer.

When Tarrant finally does show some emotion it isn’t convincing because it just comes out of the blue.

Donald Pleasence is good as the emotionally crippled Harper, a man who sees his agents as little more than disposable pawns.

The supporting cast does quite well. John Vernon makes a stylish heavy. Delphine Seyrig is good as the scheming woman who sets Tarrant up and Catherine Schell has fun as the sex-crazed alcoholic wife of the director of MI6.

Siegel’s direction is rather flat. He is unable to overcome the predictability of the plot to inject any real suspense and even the action set-pieces are not overly exciting.

There are a lot of missed opportunities. At one point Tarrant makes an escape from an awkward predicament by sneaking aboard the cross-channel hovercraft and you’re expecting an acton sequence to take advantage of the interesting setting but it doesn’t happen.

There’s one very brief nude scene but this is overall a remarkably sexless movie. There’s also no interesting romantic angle. There’s very little humour. That means it has to rely on action or style and it doesn’t have enough going for it in those areas either.
The Region 4 DVD is barebones but offers an acceptable anamorphic transfer.

The Black Windmill is not a terrible movie. It’s a competent spy thriller but it’s just a bit of an under-achiever in every department. There’s nothing to make it memorable. Maybe worth a rental if you’re a Michael Caine or Don Siegel completist.
Posted by dfordoom at 6:25 PM