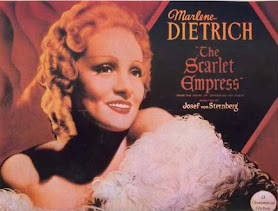 The Scarlet Empress is the fifth of the six Josef von Sternberg-Marlene Dietrich movies made at Paramount. These movies were so heavily influenced by the personal relationship between director and star that without Dietrich they would probably never have been made, or if they had been made they would have been entirely different films, so it’s reasonable to refer to them as the von Sternberg-Dietrich movies.

The Scarlet Empress was a box office failure and while it’s a truly great movie it’s not hard to see why it failed commercially. This is a very extreme movie. Von Sternberg himself described it as “a relentless excursion into style” and he wasn’t kidding. It’s difficult to think of any Hollywood movie of that era that is so obsessively concerned with style rather than substance. The style is the substance. That’s the secret of its greatness but it’s taken to an extreme that undoubtedly alienated contemporary audiences. 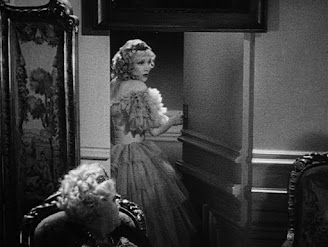 Sophie Friederike Auguste, Prinzessin von Anhalt-Zerbst (Marlene Dietrich) is betrothed to the heir presumptive to the Russian throne, the Grand Duke Peter. In 1744 the young German princess arrives at the court of the Empress Elizabeth of Russia. The dashing Count Alexei (John Lodge), who had been sent to Prussia to fetch Sophie, had led her to believe that her prospective husband was a paragon of handsome masculinity so Sophie had been very enthusiastic about her marriage. She is appalled to discover that Peter is actually a misshapen half-wit who plays with toy soldiers.

Sophie, now renamed Catherine at the empress’s insistence, goes ahead with the marriage (the marriage ceremony giving von Sternberg the opportunity to indulge his taste for aesthetic excess). The marriage is hardly a success. Peter has his toy soldiers and his mistress and he hates Catherine. Catherine has her lovers and she disposes Peter. The big problem is what will happen when Elizabeth dies. Will Peter get rid of Catherine before she gets rid of him? 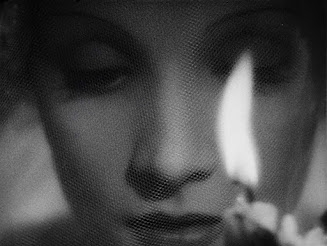 You could be forgiven for thinking that the plot merely exists in order to prove von Sternberg with the opportunity to give us one outrageous visual set-piece after another, and to some extent you’d be right. But those visuals are unbelievable. The sets are grotesque. At the Russian court the chairs are like gigantic gargoyles swallowing people up. The doors in the palace look like they were designed for giants and require half a dozen people to open them. Everything is surreal and wildly exaggerated. It’s like a fairy tale that has turned into a drug-induced nightmare. It’s impossible to list all the strange and wonderful and disturbing visual moments. It’s just one visual tour-de-force after another.

Everything is suffused with eroticism, mostly perverse eroticism. The Production Code started to be enforced in 1934 but The Scarlet Empress either got in just in time to avoid trouble or perhaps the Production Code Authority just missed the bizarre sexual imagery and incredibly risqué dialogue. Maybe the sadomasochism and perversity simply baffled them. There’s also a kind of dream sequence when the young Sophie is having stories read to her which contain quite bit of nudity. There’s even a nudie cuckoo clock. 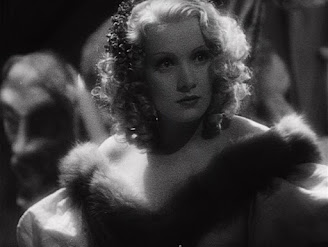 Dietrich of course looks stunning. Her performance is strange and mesmerising but it would have seriously alienated viewers at the time. They would have been bewildered by the countless layers of irony and the emotional detachment. Catherine is not a heroine but she’s not a villainess. She’s not a monster, nor is she a victim. She is all of these things, and none. She may be an innocent with the soul of a libertine or a libertine with the soul of an innocent. She may be incapable of love or she may love too deeply. There’s nothing for an audience to get a handle on. And audiences do not react well to that. It’s all quite deliberate. She’s giving von Sternberg the performance he wants and she knows what she’s doing but it’s not going to sell at the box office.

Sam Jaffe as Peter and Louise Dresser as Elizabeth give outlandish over-the-top performances. John Lodge plays Count Alexei as the type of arrogant bad boy we could well believe has broken scores of female hearts. 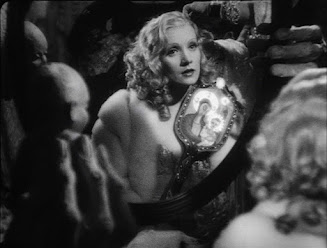 There’s nothing even remotely conventional about this movie. By 1934 Hollywood standards it’s unique and bizarre. By today’s standards it’s unique and bizarre. This is von Sternberg being totally uncompromising. It wrecked his career but with this film and the following one, The Devil is a Woman, he got to make two final extraordinary masterpieces and perhaps after that there would have been nowhere left for his career to go.
The Criterion Collection DVD release is very disappointing and should be avoided. It’s incredibly grainy and it’s rather flat. The liner notes are also pompous and worthless. I believe there’s a far superior more recent UK DVD release.

The Scarlet Empress is an intoxicating blend of irony and delirious aestheticism. You might love it or hate it but you have to see it. I loved it. Very highly recommended.
Posted by dfordoom at 4:21 PM