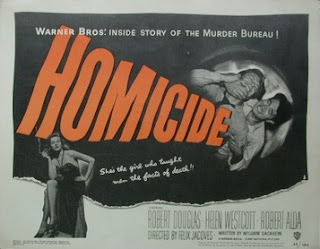 A drifter named Clifton, not long discharged from the Navy, witnesses a murder on a farm and is persuaded that it might be real unhealthy for him unless he reports the matter as an accident - that the farmer was drunk and fell off his tractor. That’s the story the sailor tells at the inquest. A couple of days later Clifton is found hanged in a seedy hotel room. It looks like an open-and-shut case of suicide but Lieutenant Landers (Robert Douglas) is very unhappy about the knot. Whoever heard of a sailor who couldn’t tie a knot properly? It’s not much, but it’s enough (along with a couple of other minor details) to put the idea into Landers’ mind that this might not be suicide after all.

The captain of detectives doesn’t think it’s enough to keep the case open but Landers insists on taking a leave of absence to do a bit of digging around. 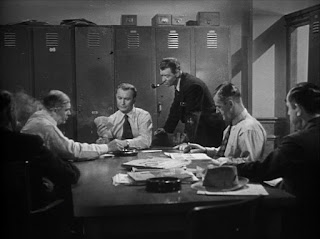 The clue he’s relying on is a book of matches from a desert resort hotel, the Glorietta Springs Hotel. Which is a very expensive hotel so why would a match-book from that hotel be found in a cheap seedy hotel in LA? When he gets to the Glorietta Springs Hotel first it seems at first that he’s set out on a wild goose chase but then he gets a lucky break thanks to some advice from Jo (Helen Westcott). Jo works the cigarette concession at the hotel. Apart from offering good advice she’s very pretty and very sweet and even if the case doesn’t amount to everything meeting her makes up for it. They fall for each other in a big way. They make such a charming couple that the romance sub-plot is a bonus rather than a distraction. 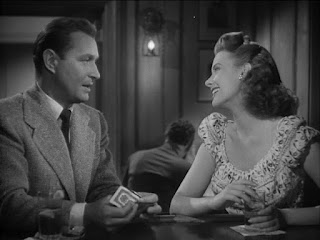 The plot is really pretty straightforward. Landers in no genius detective, he just follows up clues methodically as any trained detective would do. He doesn’t make any inspired leaps of intuition. He just does his job, which is part of the film’s appeal. He’s just a regular fairly competent cop.

It does have to be said that Landers is a bit accident-prone. He seems to just sail into dangerous situations without taking even the most basic precautions but of course if the detective hero doesn’t get himself into hot water you’re not going to have a very interesting movie. He contrives to get himself shot and beaten up as well. 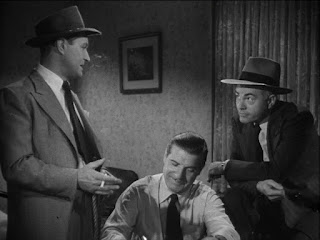 Landers is quite an engaging and character - a very polite very easy-going Canadian but he’s conscientious and he’s thorough and he’s stubborn. Robert Douglas gives him a low-key but likeable personality and a certain quiet unobtrusive charm. It’s not at all difficult to see why Jo falls for him and Helen Westcott makes her so adorable that we have no trouble believing that he’s going to fall in love with her. They have just the right chemistry.

The other cast members give very solid performances. Robert Alda is fine as Andy.

This was one of only two features directed by Felix Jacoves which is a bit surprising since he handles things very competently. 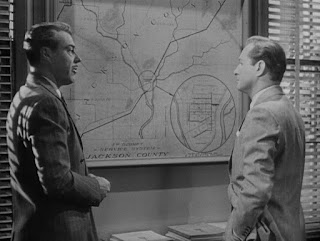 It’s a low-budget film but manages not to look cheap or shoddy.

This movie was released in the Warner Archive series as part of a film noir double-header (paired with The House Across the Street) although I can’t for the life of me see anything even remotely noir about it. It’s a straightforward police procedural.

The plot is no more than serviceable. It’s the performances by Robert Douglas and Helen Westcott that make it just a cut above the average B-picture. The romance sub-plot is more interesting than than the main crime plot. Homicide is no masterpiece but it’s harmless undemanding entertainment. Recommended.
Posted by dfordoom at 1:21 AM