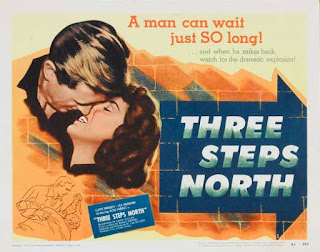 Three Steps North is an Italian-US production filmed in Italy (in Amalfi) in 1951 with a mostly Italian cast but plot-wise it plays as a fairy typical American crime B-movie in an exotic setting. That’s not necessarily a bad thing. It was directed by W. Lee Wilder, Billy Wilder’s brother.

Frank Keeler (Lloyd Bridges) did his wartime military service in Italy but he spent most of that career making a bundle on the black market. With the MPs hot on his trail he buries his ill-gotten gains in a field near Amalfi. He picks an easily recognisable tree, takes three steps north and buries the money. The MPs catch him and he spends four years in a military prison, which is not fun but he can handle it because he knows that when he gets out that money is still waiting for him. As soon as he is released he heads back to Italy (serving as a crewman on a freighter) but getting his money turns out to be infinitely more complicated than he’d expected. 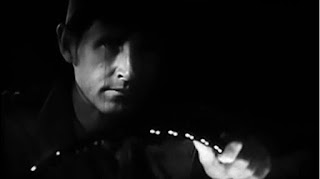 He had hoped not to attract any attention but in fact he attracts the attention of a whole bunch of people. There’s the local chief of police, an Italian private detective, a racketeer from Newark, a disreputable fellow crewman, his old girlfriend Elena, a mysterious character known as the Greek, cemetery caretaker Pietro and bar owner Guido. All of them figure out that Frank is up to something and all of them figure out that that something involves money, almost certainly money not legally obtained.

Frank thinks he can stay one step ahead of them but maybe he’s really one step behind. Frank is smart, but maybe not smart enough. He’s also unwilling to trust anybody. That might be wise but it has its drawbacks. Lester Fuller’s screenplay has plenty of twists and turns, some of them confusing but that works to the movie’ advantage - it adds to the atmosphere of suspicion and potential betrayal. 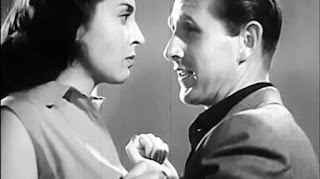 The ironic twist at the end works quite well.

The plot could easily have been approached as farce or black comedy but it’s mostly played pretty straight.

The Amalfi locations are used to good effect.

The guitar music used throughout the film is one of several elements suggesting that W. Lee Wilder was trying for the sort of feel Carol Reed achieved in The Third Man. The black market angle and the setting in Europe in the aftermath of the war add to my suspicions that that’s what Wilder was aiming for. He doesn’t have Carol Reed’s genius but he does manage an interesting and slightly offbeat tone. 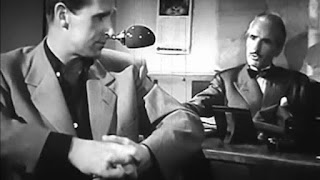 Lloyd Bridges’ cocky performance is a major plus. Frank Keeler is not evil but he is a crook and he is selfish and his arrogance turns potential allies into enemies. He’s not a particularly nice guy and Bridges is confident enough to emphasise his unsympathetic qualities. We’re not sure if we want this particular hero to win in the end.

The other cast members are very good. Aldo Fabrizi is a delight as Pietro. Lea Padavani does well as Elena, a woman who is a bit like Frank. She’s not quite a femme fatale but she’s not quite a good girl either. Maybe she wants to win Frank back, or maybe she just wants the money. All of the characters are either shady or they have a touch of ambiguity to them. Frank doesn’t trust any of them and we can’t really blame him. 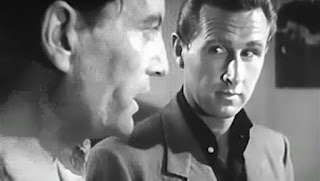 There are several public domain DVD releases of this movie. The Alpha Video version seems to be the best of a bad bunch. In an ideal world offbeat movies like this would get properly restored and get Blu-Ray releases but alas we do not live in an ideal world. Perhaps if someone could be persuaded that this is a film noir it might get a better release. It does have some very slight noir elements and movies with much more dubious claims to film noir status have been treated to high quality releases.

Three Steps North is an intriguing oddity. It’s a conventional crime story with a few engagingly distinctive elements and Lloyd Bridges really is very good. So I recommend this one, even if the available DVD editions are a bit problematic.
Posted by dfordoom at 9:21 PM