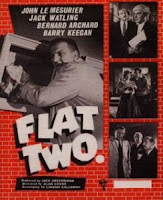 Flat Two is another of the British Merton Park Studios Edgar Wallace mysteries, this one dating from 1962. It is based on a 1927 Wallace novel.

Susan (Ann Bell)  is a charming young lady with a bit of a problem. She’s lost rather a lot of money at the gambling club run by Louba (David Bauer). She owes ten thousand pounds (an immense amount of money in 1962). There’s no way she can pay the money. Louba suggests that perhaps there is another way in which she could repay him. Some services of a personal nature she could render. In fact he’s planning a trip abroad and if she were to accompany him she would have plenty of opportunities to render ten thousand pounds’ worth of personal services.

Of course Susan could ask her rich father for the money, but Daddy would be awfully cross and it would all be very tiresome. So she resigns herself to her fate. 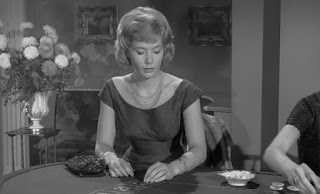 Susan does however mention the matter to her fiancé, a young architect named Frank Leamington (Jack Watling). Frank is naturally outraged that Louba is effectively blackmailing Susan into going to bed with him. He makes a bit of a scene about it and threatens to kill Louba.

Louba does get killed, but was he killed by Frank? Several people visited Louba’s flat on the fatal night. The difficult is not just that one of them is lying. For various reasons they might all be lying. When famous barrister Warden (John le Mesurier) and the Assistant Commissioner of Scotland Yard Hurley Brown (who both had business with Louba) arrive at the flat they discover the body. 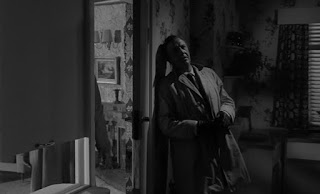 One of these people who visited the flat is Charles Berry (Barry Keegan), who has a motive of his own for murdering Louba. Indeed lots of people had a motive for killing Louba, a man whose gambling club was perhaps not entirely honest and who also had a history of sexually blackmailing a whole string of young ladies.

Unfortunately from the point of view of Inspector Trainer (Bernard Archard) there’s rather a lot of circumstantial evidence pointing towards Frank and so Frank ends up standing trial for murder, with Warden defending. Luckily Warden is one of the best defence barristers in the country. 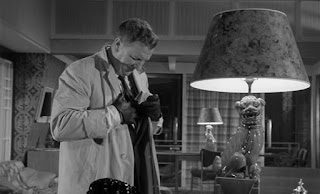 There are plenty of clues pointing towards the actual solution, hingeing not just on the times that various people visited the flat but also on a couple of pieces of physical evidence. It’s actually not that difficult to spot the solution. This is definitely a fair-play mystery.

As is the case with all the Merton Park Edgar Wallace movies the execution is skilful and professional. They were churning these films out like a production line but they managed to maintain a surprisingly high level of quality. And of course this one, like all the others, boasts a very fine cast. 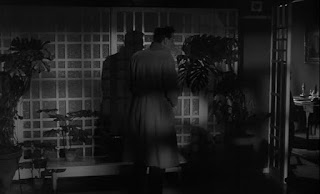 Director Alan Cooke only made a couple of features but had a prolific career in television. He handles the directing duties here unobtrusively but competently. Screenwriter Lindsay Galloway had a similar career and his script here is more than serviceable.

This film is part of Network’s Edgar Wallace Mysteries volume three DVD boxed set. And as always Network gives us an excellent anamorphic transfer (these movies were all shot in black-and-white and widescreen).

Flat Two is another solid entry in this extremely enjoyable series and it’s recommended.
Posted by dfordoom at 7:16 AM