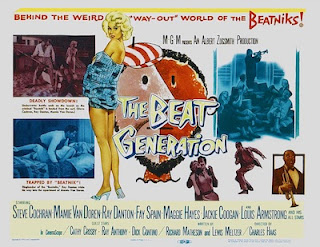 Bitter cop Dave Culloran (Steve Cochran) and his partner Jake Baron (Jackie Coogan) are hunting a serial rapist nicknamed the Aspirin Kid because he wins his victims’ trust by pretending to need a glass of water to take an aspirin. The hunt will take Culloran and Baron into the word of the Beat Generation. The rapist calls himself Arthur Garrett but we will discover that his name is really Stan Hess.

The Aspirin Kid’s latest victim has provided a description. It’s not enough to lead the police to the perpetrator but it does take them a lot closer than they realise.

Then Culloran’s wife Francee becomes one of Hess’ victims. This puts a strain on their marriage, and on Culloran. The case becomes a personal obsession. It also allows the movie to focus on a subject that was far more controversial at the time than rape - abortion. Which, it has to be said, it handles carefully but sensitively.

Hess is a beatnik, or at least he hangs around with beatniks and he certainly has the nihilism popularly associated with the beats.

Now a 1959 Hollywood movie focusing on the world of the beatniks sounds like it’s going to be an exercise in camp, which it is up to a point, but mostly this is a gritty nasty and at times very dark crime flick. A particularly nasty touch is that Hess also leaves evidence at the scene of his crimes that suggests that the women (and he only targets married women) may have been willing. He likes playing with people’s minds.

With Albert Zugsmith producing you might be entitled to expect this movie to be complete nonsense but there was some real talent involved. Talent such as Richard Matheson, who co-wrote the screenplay. The movie does have a point to it. Hess hates women and rapes them to express his hatred. But Dave Culloran’s attitude towards women is also troubling. Even before the rape Francee had accused Culloran of treating her the way he’d treat a suspect. He doesn’t ask her questions, he interrogates her. In fact his treatment of the first rape victim is a kind of rape (well that’s the impression the screenplay seems to be trying to give).

Since this was 1959 we obviously see the lead-up to the rapes but nothing of the actual rapes. But we hear enough to make the rape scenes genuinely harrowing. Charles F. Haas didn’t have much of a career as a feature film director but it has to be said that he handles these scenes very effectively indeed.

Steve Cochran is excellent. It’s a tough rôle. Dave Culloran isn’t the most likeable guy and he has to be played as a not very likeable guy. At the same time he isn’t a bad guy. He just has an unfortunate way of dealing with people. He’s a cop. Being a cop is all he knows. Underneath his prickly exterior he loves Francee.

Fay Spain is very good as Francee. Ray Danton is suitably creepy as Hess. Once you’ve seen Jackie Coogan as Uncle Fester in The Addams Family it’s had to take him seriously in anything else but he’s quite good as well.

And then there’s blonde bombshell Mamie van Doren as Georgia Altera, who almost becomes one of the Aspirin Kid’s victims, or maybe she doesn’t. I’m sure I don’t have to tell you that van Doren looks great.

The depiction of beat culture is about what you’d expect from Hollywood. The beatniks really were ridiculously easy to mock, and this film doesn’t miss an opportunity to do so. This leads to an interesting weirdly discordant feel, veering from absurdist farce to social commentary to a surprisingly hard-edged film noir tone. This mixture could have been disastrous but for some odd reason it isn’t.

Olive Films have released this one on DVD and Blu-Ray. The DVD, reviewed here, boasts an excellent anamorphic transfer (the film was shot in the Cinemascope aspect ratio).

The Beat Generation is a much better movie than it has any right to be. Underneath its campy beatnik exterior it’s a tough little crime movie. Highly recommended.
Posted by dfordoom at 2:50 PM