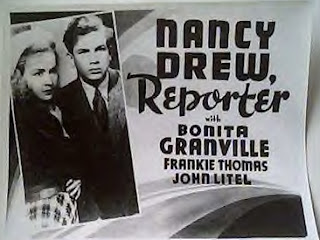 Nancy Drew…Reporter, released early in 1939, is the second of four B-movies made by Warner Brothers featuring the popular fictional girl detective. Nancy Drew had made her first appearance in print in 1930. Amazingly, new Nancy Drew books are still appearing ninety years later. The books were written by various writers, all using the pseudonym Carolyn Keene. Both the fans and the writers of the books had mixed feelings about the films since Nancy’s character was changed somewhat (and apparently livened up a little).

Nancy Drew…Reporter starts with hardbitten city editor named Bostwick who discovers, to his horror, that he has been enveigled into giving temporary work experience jobs to half a dozen teenaged would-be reporters. He fobs them off with assignments to cover the most trivial stories he can think of. Unfortunately for Bostwick his ace reporter Tracy, who is supposed to be covering a sensational coroner’s inquest, is nowhere to be found. Bostwick leaves the assignment on Tracy’s desk. Even more unfortunately for Bostwick one of the teenaged aspiring reporters, Nancy Drew, spots the assignment and pockets it and sets off to cover the inquest.

Eula Denning is facing a murder charge over the death of an elderly lady. The evidence against her is pretty strong but Nancy knows she’s innocent because, well just because ul seems really nice. And Nancy thinks she might be able to find the vital piece of evidence the police couldn’t find. Of course it’s crazy for Nancy to try to find the evidence on her own since the real killer is going to be searching for it as well but Nancy doesn’t stop to think about the danger. 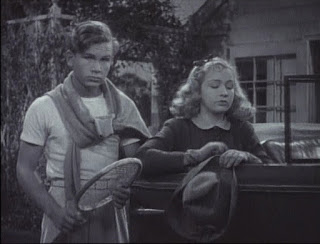 Nancy also manipulates her father, a top-flight attorney, into defending Eula Denning. Nancy manipulates everybody but nobody really minds because that’s just what she does and she’s pretty transparent about it. She’s just the sort of girl you can’t stay mad at for very long. Young Ted Nickerson, who lives next door and is not exactly her boyfriend but they are maybe just a little sweet on each other, gets manipulated by Nancy a lot. He knows that she manipulates him but he still falls for it every time. Teenaged boys tend to do that where cute teenaged girls are concerned.

There are some genuinely clever moments. Poor Ted finds himself having to go three rounds with a prize-fighter and fully expects to get beaten to a pulp. This is of course the result of another of Nancy’s bright ideas. There’s also an odd but amusing scene in a Chinese restaurant. Ted and Nancy can’t pay the bill but instead of being forced to wash dishes they have to provide some musical entertainment for the patrons. This one isn’t Nancy’s fault, it’s the fault of Ted’s bratty kid sister and her pal. Ted and Nancy’s escape from the hotel later on is also fairly ingenious. These scenes are a bit more inspired than you expect from a run-of-the-mill B-feature.

Bonita Granville was just fifteen when this movie was shot although she was already a film veteran with an Oscar nomination to her credit. Her hyper-energetic performance works and she manages to be pushy without being obnoxious. With the wrong performance Nancy could have been extremely irritating but Granville gets it just right. Frankie Thomas is pretty good as Ted Nickerson. Nancy leads him around by the nose but somehow Thomas is able to make Ted not seem like a complete fool. 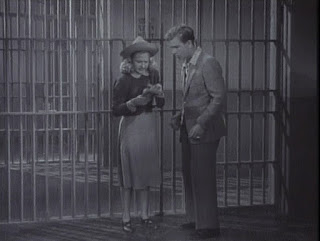 What’s really nice about it is that we laugh with Nancy and Ted rather than at them. They’re a bit naïve and inexperienced but they’re not just dumb kids. They’re smart and resourceful and Nancy has the stubborn doggedness that makes a good detective. Nancy and Ted are characters that the target audience would certainly have been able to relate to and to admire. It doesn’t condescend to its audience.

When judging a movie like this you really have to take account of what it’s trying to, and what it’s trying to do is to appeal to an adolescent audience (and probably primarily adolescent girls). The ingredients were chosen accordingly - there’s a not-too-complicated mystery, a feisty but likeable young heroine, a fair amount of comedy and just a hint of (suitably chaste) romance. It’s a formula that the target audience would have been expected to lap up (and they did). Even adolescent boys would have tolerated it and maybe even enjoyed it because it has a juicy murder, a car chase, plenty of comedy and all that hardboiled newspaper reporter stuff. 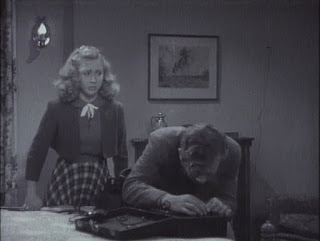 William Clemens directed all four Nancy Drew movies along with plenty of other B-movies. The secret to making a successful B-movie is to keep things moving so the audience doesn’t notice any shortcomings in the plot and Clemens certainly manages to do that. Kenneth Gamet wrote the screenplays for all four movies and while this one doesn’t have a plot that is going to offer the viewer much of a challenge it does have enough gently amusing dialogue to keep things entertaining.

As with most major studio B-movies of that era it doesn’t look like a big-budget movie but it doesn’t look cheap either. It’s polished and slick. That was perhaps the single biggest virtue of the studio system - they could make B-movies on limited budgets but with all the resources of a major studio behind them the results had real quality. 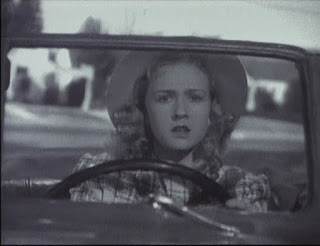 Umbrella’s Region 4 DVD offers a pretty decent transfer without any extras. All four Nancy Drew movies are also available in a boxed set in the Warner Archive series.

Nancy Drew…Reporter is very lightweight but that’s exactly what it’s supposed to be. It’s light-hearted entertainment but it has charm and a certain panache and it has boundless energy. I’ve never read any of the books so I don’t know how much the character was changed but as played by Bonita Granville Nancy Drew is impossible to dislike. Highly recommended.
Posted by dfordoom at 4:27 PM