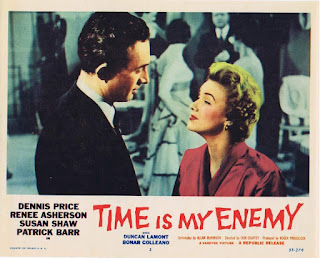 Time Is My Enemy is a British crime B-picture included in Kino Lorber’s British Noir II boxed set. It was released by Vandyke Pictures in 1954.

The movie opens with the robbery of a jewellery store in which the jeweller is shot. Inspector Wayne (Duncan Lamont) is certain it’s the work of a gang he’s been after for quite a while. All he needs is some evidence.

Inspector Wayne’s publisher friend John Everton (Patrick Barr) and his wife Barbara Everton (Renée Asherton) are about to get unwittingly mixed up in this sordid crime. 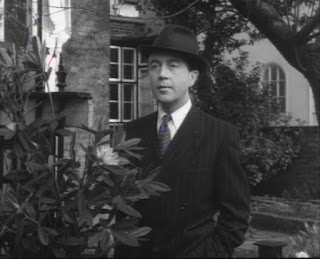 Barbara Everton had been married before but her husband Martin was killed in a bomb blast during the war. Nobody, least of all Barbara, regretted his death. Martin Radley was definitely a wrong ’un. Now she and John are happily married with a son and they face a bright future. At least they face a bright future unless something really awful were to happen - something like Martin Radley turning out to be alive after all.

The only thing that could make such a ghastly situation worse would be if Martin Radley now happened to be a desperate jewel thief (who calls himself Harry Bond among other aliases) who has just shot a man, a man who might well die. And if he decided that his only chance of survival was to blackmail Barbara. 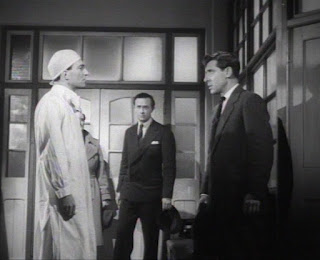 Barbara doesn’t know what to do and as is the case with so many movie protagonists just about everything she does do turns out to be poorly thought out and likely to make a bad situation worse.

Don Chaffey was a competent director who went on to have a successful career in television in Britain, Australia and the United States. His feature films included the disappointing slightly noirish sleaze thriller The Flesh Is Weak.

Screenwriter Allan MacKinnon had a not overly distinguished career (which included the reasonably effective railway spy thriller Sleeping Car to Trieste) before his premature death a year after this film was released. His screenplay for Time Is My Enemy is a bit contrived but it’s quite clever. 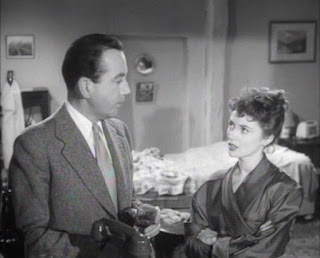 The big attraction here is Dennis Price as Martin. Price was a wonderful actor who could be charming or amusing or sinister or even downright vicious as the occasion demanded. In this case he’s a nasty piece of work indeed. He’s an out-and-out cad and Dennis Price makes a fine cad.

Renée Asherton as Barbara, Duncan Lamont as the policeman who gets emotionally entangled and Patrick Barr as the well-meaning husband all provide solid support but the movie belongs to Dennis Price.

Is it film noir? Thematically I think it does have some legitimate claims to being noir - we have a protagonist drawn into a nightmare world by a combination of bad luck and bad judgment. It’s also one of those noir films (and there were quite a few) in which a male character acts as the equivalent of a femme fatale. 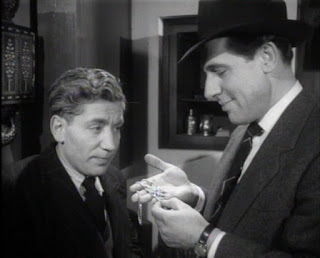 Time Is My Enemy gets a good transfer from Kino Lorber. The transfer is fullframe which is quite correct and it’s in black-and-white.

The Kino Lorber British Noir II set also includes the disappointing The Interrupted Journey and the very good Cosh Boy and The Vicious Circle as well as Time Lock which I’ve not yet watched.

Time Is My Enemy is a decent little not-quite-noir but noirish B-movie and it’s recommended for Dennis Price’s performance.
Posted by dfordoom at 7:50 PM