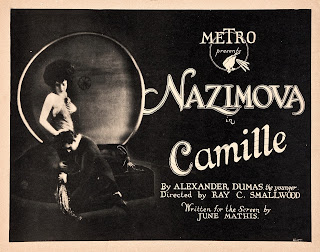 The 1921 Metro Pictures silent version of Camille starring Alla Nazimova and Rudolph Valentino has been overshadowed by the 1936 Greta Garbo version. While Garbo’s Camille is unquestionably one of the greatest romance movies ever made the 1921 version is in many ways a much more extraordinary movie. It is a bizarre masterpiece, but it is a masterpiece.

Camille is of course based on the immensely popular 1848 novel La Dame aux Camélias (The Lady of the Camellias) by Alexandre Dumas fils.

Marguerite Gautier (Nazimova) is the most celebrated courtesan in Paris. Young Armand Duval (Valentino) falls in love with her and wants to marry her. His father, a man of wealth and high social position, is horrified. Marguerite is, after all, a prostitute. 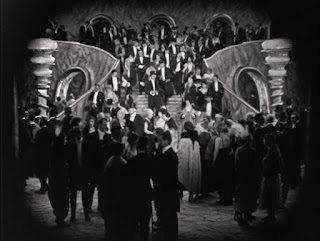 And Marguerite is very ill. She has consumption and it is highly likely she will not live.

It’s not a complicated plot but it’s more than sufficient to make this one of the great love stories.

Alla Nazimova was, for a brief moment, a very very big Hollywood star indeed. In the early 1920s she took complete control of her own career (and she had the star power to do so) and began producing her own movies. And, according to some accounts, she was in practice the director as well. She then made a couple of movies which were spectacular flops but which later came to be recognised as masterpieces of a very strange and fascinating kind. The most notorious of these movies was her unbelievably outrageous 1922 adaptation of Oscar Wilde’s already outrageous play Salomé. Her career as a star was over by the mid-20s. 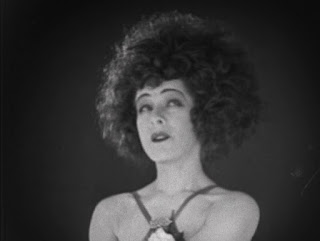 Whether Nazimova was a great actress or a terrible actress is an irrelevant question. Nazimova was Nazimova. She invented her own style. Pete Townshend once said that Keith Moon was the world’s greatest Keith Moon-style drummer. You could just as accurately say that Nazimova was the greatest Nazimova-style actress of all time. Whether you like her style or not it certainly attracts attention. Camille is a Nazimova movie. It has her fingerprints all over it.

As extraordinary as Nazimova was you could argue that the real star of this movie is art director and costume designer Natacha Rambova. The look of Camille is entirely Rambova’s work and it’s one of the most visually stunning movies ever made. If you think you love art deco all I can say is that you haven’t seen art deco until you’ve seen Natacha Rambova’s interpretation of art deco.Even in an age of extraordinary women Rambova was something special. She was a true visionary. The word genius is overused but she was a genius. She later became a distinguished Egyptologist. 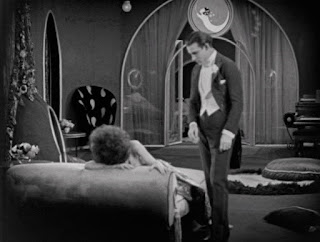 She is of course more famous for having later married Valentino. Scandalous rumours about the couple and about Rambova’s alleged bisexuality abounded, most of which are almost certainly untrue. What is true is that there was nothing ordinary about either Rambova or Valentino.

Which brings us back to Nazimova, whose personal life was (you guessed it) also scandalous and flamboyant. She almost certainly was bisexual. And in the case of Nazimova her sexuality really is relevant to an appreciation of her as an actress. Exotic ambiguous flamboyant sexuality was an integral part of her style.

As for Valentino, he was in my view a remarkably underrated actor. He was first and foremost a star but given the right material the man could act. 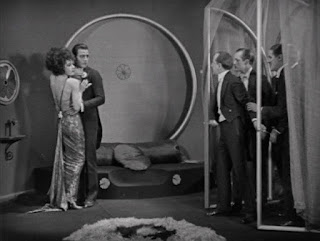 The 1921 version of Camille is included as an extra with the Warner Home Video release of the 1936 Garbo version which makes the disc an absolute must-buy. The transfer of the 1921 version, given the fact that we’re lucky the film has survived at all, is pretty good. Which matters because this movie is such a spectacular visual experience.

The 1921 Camille has enormous historical significance. Nazimova, Natacha Rambova and Valentino are crucial figures in Hollywood (and indeed cinematic) history. If you love movies you have to sample their work. And in its own delightfully strange and idiosyncratic way it’s a great movie and a very entertaining one. It’s very very melodramatic and it’s a three-hankie weepie but it’s very highly recommended.
Posted by dfordoom at 2:27 AM