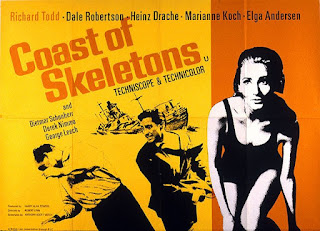 Coast Of Skeletons is a 1965 potboiler produced by Harry Alan Towers. Towers also co-wrote the screenplay. The movies Harry Alan Towers was associated with were usually modestly budgeted, with no artistic pretensions but generally with fairly high entertainment value.

Coast Of Skeletons claims to be based on Edgar Wallace’s famous 1911 collection of African adventure stories Sanders of the River. In fact what it does is to take the Sanders character as a very vague starting point.

In the movie Harry Sanders (Richard Todd) is a colonial policeman in one of Britain’s African colonies. He’s good at his job and he loves Africa. But times are changing. The governments of the newly independent African states do not necessarily want reminders of the colonial past hanging about. Sanders finds himself back in England, unemployed.

Harry Sanders is not the sort of chap to waste time feeling sorry for himself. He finds work as a kind of freelance investigator for a firm of solicitors. They want the business affairs of a certain A.J. Magnus (Dale Robertson) looked into. It’s not that they think Magnus is a crook. It’s more that he’s the kind of businessman inclined to take risks and the people whose money he is risking can get just a little nervous. Magnus also tends to be involved in businesses that are just a little unconventional. Such as his offshore diamond dredging project in West Africa.

Sanders is keen to take on this investigative assignment and he’s even happier when he’s told he can take his old colonial police colleague Tom Hamilton (Derek Nimmo) along with him. It will be just like old times.

The first thing the movie has to do is to convince us that Harry Sanders is a very very tough hombre. Within the first few minutes of the film he’s been involved in two all-in brawls and we’re prepared to accept that yes, he is a tough guy.

Magnus owns a freighter which is used in the diamond dredging operations. It’s skippered by a German named Von Koltze, a former U-boat captain and war hero. The original plan was that a whole party, including Magnus and Sanders, would travel to West Africa on the ship. The party would include Captain Von Koltze’s glamorous new wife Elizabeth (Elga Anderson) and Elizabeth’s sister-in-law Helga (Marianne Koch). Helga is a photographer and she seems like she’s going to take an interest in Sanders. There’s a change in plan and it’s now arranged that the entire party will fly to Africa. That immediately causes tension between Captain Von Koltze and his wife.

In fact there’s quite a bit of tension between Von Koltze and his wife. Elizabeth is spoilt and she’s bored being a sea captain’s wife. She wants money and glamour and excitement. When a man has a beautiful younger wife and he can’t provide her with the things she wants he can be tempted by the prospect of quick riches, even riches that are not strictly legal.

Captain Von Koltze isn’t necessarily the only one whose plans for getting rich are not entirely legal. There’s some question about this whole diamond dredging business, and the mysterious sinking of Magnus’s first dredge, and the subsequent insurance payout. There’s also the question of Magnus’s former business partner who shot himself. And some of Magnus’s current employees seem rather disreputable.

Richard Todd makes a effective hero in the very correct British style. Harry Sanders is not a man who could ever be tempted to do anything dishonourable. It’s enormous fun seeing Derek Nimmo playing a tough ex-colonial policeman. The other cast members are all effective.

The location shooting (in Namibia) adds considerable interest. It’s not the kind of African location shooting you expect - no herds of elephants, no lions, none of the clichés. What we get instead is forbidding desert and the desolate coastline known as the Coast of Skeletons because it’s littered by the wrecks of so many ships. Only one thing can lure a man to this coast - the thought of easy money. And easy money seems to be there for the taking.

The setting is definitely one of the movie’s major assets. The shoreline is retreating on this part of the coast so many of the wrecks are now high and dry, scattered up and down the beach, slowly rotting away.

There are a few low-key action scenes (including some underwater action) but mostly this is a film that relies on suspense, and on a brooding atmosphere of jealousy, betrayal and suspicion.

Network’s DVD release is barebones but the anamorphic transfer is very nice.

Coast Of Skeletons is a modest unassuming but perfectly competent thriller. Recommended.
Posted by dfordoom at 11:39 PM