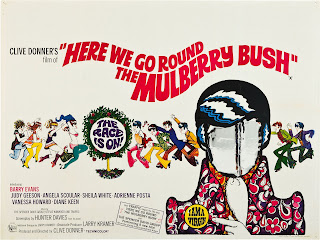 Here We Go Round the Mulberry Bush is a lighthearted British coming-of-age movie directed by Clive Donner and scripted by Hunter Davies from his own novel. It’s the tale of the misadventures of a young man desperately trying to lose his virginity.

Jamie (Barry Evans) just doesn’t seem to have any success with girls. He tries really hard but something always goes wrong. We assume that he’s around eighteen (he’s still at school) and he’s as obsessed about sex as any other normal teenaged male.

It’s not that girls dislike him. It’s just that the girls he wants seem to be more attracted to other men, and the girls who do like him don’t appeal to him.

He could probably get Linda but she’s too scatterbrained for his tastes. The girl he really wants is Mary (Judy Geeson). Mary is gorgeous and she has class. Unfortunately she also has rich young men pursuing her and she’s a bit out of Jamie’s league.

In desperation he joins a church group where there’s a girl who seems to be quite attracted to him but it all ends in embarrassment rather than the passion he dreams of. 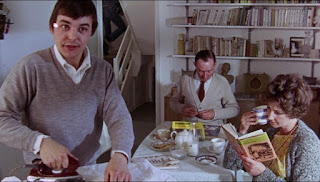 Then there’s Caroline. Caroline is rich but she seems rather keen on him and when she invites him to stay at her parents’ country house for the weekend he’s pretty sure that it’s finally going to happen. And it would have happened except that Caroline passes out dead drunk before it can happen. While Jamie is trying to bed Caroline her father (played be Denholm Elliott) and her brother are busily trying to bed the family’s German au pair Ingrid, and Caroline’s mother seems to have designs on Jamie. It’s all too much for poor Jamie.

Then he runs into Mary again. He figures he doesn’t have a chance but he might as well give it a try.

Does Jamie eventually get what he wants? Well, in a way, but maybe it wasn’t quite what he wanted after all. 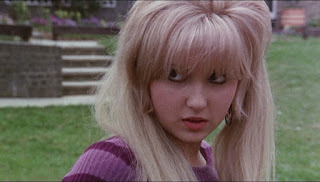 Given the subject matter and the fact that this is a 1960s British movie you might be forgiven for expecting lots of misery and despair but this is not that type of movie. It remains lighthearted and cheerful. This is a comedy. We never believe that Jamie’s situation is hopeless. He’s good-looking, he’s amusing, he has boyish charm and he’s not creepy. We know that it’s just a matter of time before a girl will come along who will decider that he’s just what she’s been waiting for. For Jamie losing his virginity is a challenge but it’s obviously not going to be an insurmountable hurdle.

This is a very 1960s movie, in fact it’s very much a Swinging 60s movie. The Richard Lester influence is very clear. There’s pop music (provided by the Spencer Davis Group and Traffic, both pretty big bands at the time), there are fantasy sequences, everything is bright and colourful and there’s just a slight avant-garde vibe (and a definite Richard Lester influence). The fourth wall isn’t just broken occasionally, it’s never there at all. Jamie spends the entire film speaking directly to the audience.

This is a kind of precursor to the British sex comedies of the 70s (a much despised genre that is nowhere near as bad as pompous critics would lead you to believe). Had it been made just a few years later there would have been copious amounts of nudity but in 1968 British film censorship was still ludicrously draconian. And even a rather tame movie such as this ran into trouble with the censors (they were particular upset by Judy Geeson's nude scene which is possibly the sweetest most tasteful nude scene you'll ever see). This movie is tame, but the tone is definitely somewhat similar to that of those 70s sex comedies. 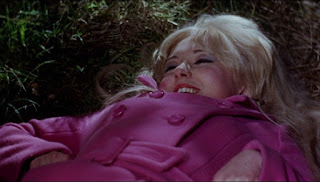 It’s also, like so many British movies of its era, about class as well as sex. Jamie is working-class (although his family is respectable and by no means poor and could perhaps even qualify for the lowest echelons of the lower middle-class). He could undoubtedly bed Linda but Linda is working class. Jamie is more attracted to middle-class girls with style and grace. Caroline’s family is upper middle class. They’re not exactly portrayed as decadent or degenerate but their morality is rather flexible. They consider that having all the male members of the family bedding the au pair is perfectly normal behaviour. And it has to be said that Ingrid seems totally at ease with the situation. But of course she’s European and doesn’t share the bizarre British attitudes towards sex. Unlike the British characters in the film she seems to think of sex as something that normal healthy girls should enjoy.

At 23 Barry Evans was, on paper, much too old to play Jamie but Evans always had that baby-faced look and he gets away with it. And he’s pretty good - he never makes Jamie seem obnoxious or overly self-pitying or pathetic. Jamie is a nice lad and he treats girls decently and we hope he succeeds in his quest to get laid.

Judy Geeson was 18 at the time, stunning and already an accomplished and experienced actress. She’s always worth watching and she handles her rôle with considerable aplomb. On the whole the acting is extremely good. Special mention must be made of Angela Scoular who is an absolute delight as the wildly eccentric Caroline. 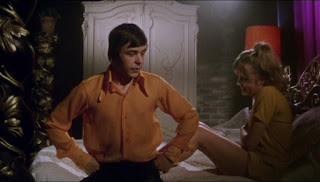 The humour is quite sexual but never crude. This is a good-natured little movie and both the male and female characters are sympathetic. They all have their quirks but they’re all basically pretty nice people. The class element is there but it’s handled with a light touch. This is a movie that has no interest in bludgeoning the viewer with politics.

This movie is the absolute antithesis of the British New Wave with its emphasis on misery and hopelessness. The teenagers in Here We Go Round the Mulberry Bush are not doomed. They’re looking forward to the future. They believe they have a good chance in life and they’re correct. Jamie will be going to university when he leaves school, as will many of his friends. The movie was shot in Stevenage, one of the notorious New Towns, and while it’s a bit soulless and antiseptic it’s also clean, bright and cheerful.

After its moderately successful theatrical release this movie simply vanished until the BFI released it as a Blu-Ray/DVD combo. It’s a lovely transfer. As usual the BFI has thrown in a couple of short films from the period as extras. The Blu-Ray includes both the uncut version and the version that was butchered by the puritanical British censors.

Here We Go Round the Mulberry Bush is a fascinating late 60s time capsule and it’s enjoyable in a totally innocuous way. I liked it. Recommended.
Posted by dfordoom at 6:15 PM