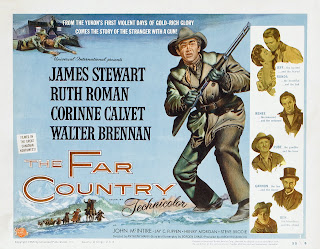 The Far Country was the fourth of the five westerns directed by Anthony Mann and starring James Stewart. These movies, starting with Winchester ’73, established Mann as a director of A-features and totally revitalised Stewart’s career. These movies gave Stewart the chance to demonstrate that he could play much darker roles and play them very well indeed.

Within the first few minutes it’s obvious that Stewart has by now well and truly shed his Aw, shucks persona. He might turn out to be the hero but if so he’s going to be a very dark sort of hero.

Jeff Webster (James Stewart) arrives in Seattle in 1896 with a herd of cattle. That’s what he does for a living. He drives cattle. There was trouble on this last drive and now Jeff has a possible murder charge hanging over his head. He is almost arrested but a woman on whom he has never set eyes hides him in her cabin. The woman is Ronda Castle (Ruth Roman) and they immediately recognise each other as kindred spirits. They’re both cynical and they both believe in looking after Number One. 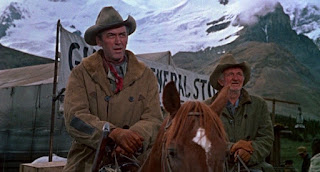 Jeff, Ronda and those steers are off to Alaska on a steamship. They arrive in Skagway in Alaska and we quickly find out that Skagway is not exactly a civilised community.

Skagway is run by Gannon (John McIntire). He seems to be judge, sheriff, mayor and public hangman all at the same time, as well as being the town’s leading businessman.

Jeff escapes the hangman’s noose. Gannon takes a liking to him. He thinks Jeff is his kind of man - a cynic who understands that might makes right. He figures that Jeff might eventually cause him problems in which case he’ll have to hang him but in the meantime he likes Jeff. While Gannon does acquit Jeff of murder he seizes his cattle.

Jeff needs a job and Ronda provides one. Ronda is the other big wheel in Skagway. She runs the local saloon, a very prosperous establishment which provides the kinds of entertainment that frontier men crave. This clearly includes whores although this being Hollywood in 1954 that part of her business is glossed over.

The job Ronda has in mind for Jeff is taking a supply train to Dawson, over the border in Canada. Jeff’s pals Ben (Walter Brennan) and Rube (Jay C. Flippen) will go with him. 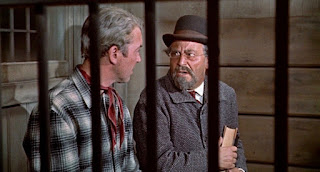 Gold fever has struck Dawson. It infects everybody. Including Jeff. Fortunes can be made quickly and easily.

The lawlessness of the frontier has never been a major problem in Dawson. THere’s never been enough crime to worry about. But the gold has changed all that. When you add greed to lawlessness you’re certain to get robbery and murder and that’s what Dawson gets.

There is no law and order in this movie. There’s just power. In theory Gannon represents the law. Gannon has no interest in the law. In Skagway he is the law. He is the law because he is willing and able to use naked force to enforce his will. As far as Gannon is concerned whatever makes Gannon richer is lawful. 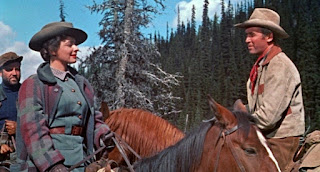 Jeff understands this. He is a realist. He believes those steers rightfully belong to him but he understands that his ownership does not depend on a piece of paper but on his willingness to use his gun to assert his ownership. Jeff takes it for granted that this is the way the world works and there’s no use complaining about it. If you’re strong enough and ruthless enough you’ll do OK. If you’re not, that’s your problem. Jeff doesn’t worry about other people’s problem. Insofar as he has any loyalties or human ties at all he’s fond of Ben and Rube.

This is the purest distillation of the Wild West (although in this case it’s the Wild North). The law doesn’t matter. Power matters. Power rests on force. If you own something and want to keep it you’d better be prepared to use your gun to defend it. This is rugged individualism taken to its logical conclusion. You worry about yourself and you let other worry about themselves.

If you’re a woman then you have to be as ruthless as Ronda. If that means manipulating men then that’s what you do. 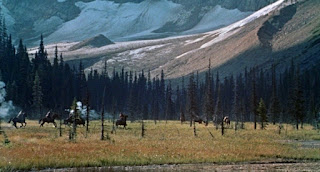 Lying and cheating don’t matter unless you get caught and you’re not quick enough with a gun.

Of course Jeff will eventually have to decide whether he can simply ignore other people’s problems or whether he’ll have to start being a responsible member of a society. So this is a movie about the transition from frontier barbarism to civilisation. It’s not a dazzling central idea but it works here because Mann keeps us waiting so long for Jeff to make his choice, and it works because of James Stewart’s brilliantly edgy performance. Ruth Roman and John McIntire are excellent as well, plus the cinematography is impressive.