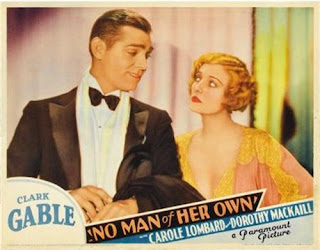 No Man of Her Own is a 1932 comedy/romance starring Clark Gable and Carole Lombard. I went through a major phase of enthusiasm for pre-code movies some years back but it’s quite while since I’ve watched any. I’m intending to revisit the scandalous and wicked pre-code era and since I happen to own a copy of this movieI figured this would be a good starting point. I saw this movie so long ago that I had forgotten everything about it.

The movie opens with a high stakes card game. Babe Stewart (Clark Gable) has had a lucky night. Except that the way Babe plays cards luck has nothing to do with it. Babe and his cronies are card sharks and they’ve just fleeced another victim.

One of Babe’s cronies is Kay Everly (Dorothy Mackaill). She’s Babe’s girlfriend. At least she thought she was. Babe has just given her the bad news that she’s now his ex-girlfriend. Kay makes a fuss. This amuses Babe. He thought she knew the score. It’s not as if he’d ever told her he loved her. Babe picks up women and discards them but he is as he says a straight shooter when it comes to women. If they’re smart girls they know what the deal is right from the start. But Kay takes it rather badly when she finds herself in Dump City.

A cop named Collins (J. Farrell MacDonald) is making things hot for Babe and his pals. Babe figures it might be wise to stay out of New York for a while. He hops on a train and ends up in Glendale. 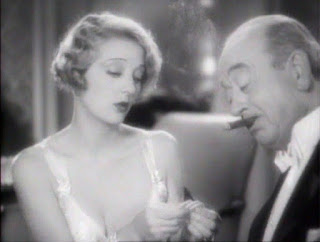 Glendale is a sleepy little town. Nothing ever happens there. It’s not all bad though. Babe does meet the local librarian, Connie Randall (Carole Lombard). Connie is your typical prim librarian. At least she appears to be prim and proper. In fact Connie is thoroughly bored with being prim and proper and she’s thoroughly bored with Glendale. Babe makes some very obvious advances to her in the library. She gives him the brush-off. Actually Connie thinks Babe is the most exciting man she’s ever met and she wants him but she thinks that playing hard to get would be her best tactic.

The closest thing Glendale offers to excitement is the dance out at Lake Inspiration. The locals think it’s pretty wild. Young people go there and do wicked things, like dancing.

Babe doesn’t think the dance will offer too much excitement but Connie will be there so naturally he makes sure he’s there as well. He thinks Connie might provide quite a bit of excitement. She’s clearly a girl with a bit of a wild adventurous side to her. One thing leads to another and they end up - married. They came to that decision in a sensible adult way. They tossed a coin. Heads they sleep together, tails they get married. Tails came up. And Babe never goes against the toss of a coin. It’s one of his superstitions. 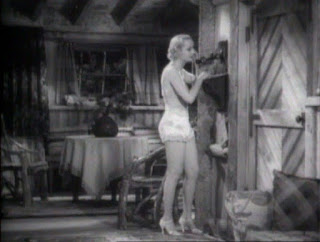 So now he has a wife. And he has a problem. You see he’s told her a few little white lies. Actually he’s told her a bunch of whopping great huge lies. For one thing he’s told her he has a job. Of course Babe has never worked a day in his life. Now he’s going to have to pretend that he really does have a job.

The card-sharping is still going well and Connie proves to be an asset. She has no idea that the card games are crooked but she does know how to be the perfect charming hostess and having a sexy blonde around helps in getting the sheep to submit to being fleeced.

Inevitably the day comes when Connie figures it all out. That makes Babe’s situation really complicated. Also, inevitably, Babe figures out that he’s a lot more fond of Connie than he thought he was. He really doesn’t want to lose her.

This movie came at an interesting point in the careers of both Gable and Lombard. They were fast-rising stars but not yet the really major stars they would soon become. In fact Lombard has to share second billing with Dorothy Mackaill. This is, curiously enough, the only movie Gable and Lombard made together. Gable and Lombard are both terrific and they really steam things up when they’re onscreen together. 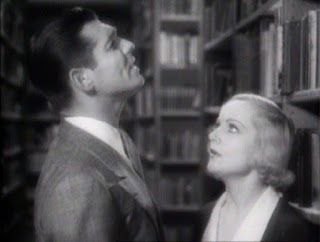 Dorothy Mackaill was a moderately big star during the pre-code era, after which her career came to an almost complete standstill. This happened to a number of stars. They just couldn’t make the transition to the strait-laced Production Code era. Her pre-code movies are worth checking out and I reviewed several during my last bout of pre-code fever - The Reckless Hour (1931), the breezy and charming Bright Lights (a backstage musical with romance and murder made in 1930) and the outrageously sleazy but wonderful Safe in Hell (1931). It’s well worth checking out any pre-code movie with Dorothy Mackaill. She doesn’t have a big part in No Man of Her Own but what she does she does well.

This is a pre-code movie so you might be wondering if we’re going to see Carole Lombard in her underwear. Have no fears. This movie does indeed include the obligatory pre-code underwear scene.

Pre-code movies take a bit of adjusting to. It’s not just the racy dialogue, the scenes of girls in their underwear, the occasional glimpses of nudity. It’s not just the absence of overt moralising. The whole tone is different. But there’s more to it than that. They tend to be structurally different compared to Production Code era movies. The Production Code forced writers to adhere to very rigid formulas. Things had to be wrapped up neatly in the end in such a way as to leave the audience in no doubt that the virtuous always get rewarded and wrongdoers always get punished. In the pre-code era writers had a lot more narrative flexibility. As a result the narrative structures often seem a lot looser. And more unpredictable. The writers were not forced to be constantly underlining a moral message. They could attempt plot twists that would have been unthinkable after 1934 and they could leave room not just for moral ambiguity but narrative ambiguity. 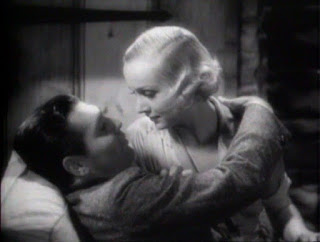 There’s some of that in No Man of Her Own. The plot lacks the sense of inevitability that you get in Code era movies. And you genuinely have no idea what is going to happen to the characters. You can’t just assume that all the male wrongdoers will end up serving long prison terms and all the female wrongdoers will end up dead. Once you adjust to the totally different world of pre-code Hollywood it becomes rather exciting.

No Man of Her Own is a pretty good pre-code movie. Gable and Lombard are in top form. Babe is a loveable rogue. Connie is a good girl but she’s not boring about it and she doesn’t moralise. She’s fun. There’s plenty of entertainment value here. Highly recommended.

My copy of No Man of Her Own is an ancient DVD from the dawn of the DVD era and the transfer is passable. This movie is now available on DVD from Kino Lorber.