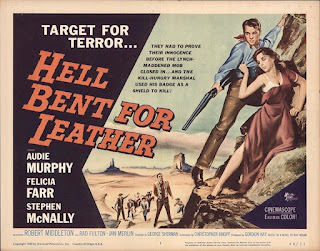 George Sherman’s Hell Bent for Leather is a 1960 Audie Murphy western released by Universal-International. It’s a movie about an innocent man who finds himself hunted for a crime he knows nothing whatever about. It’s a case of mistaken identity, with some twists. It’s a theme that has been tackled countless times but it’s handled faultlessly here.

Clay Santell (Audie Murphy) is a horse dealer. A perfectly honest legitimate horse dealer. When a man wanders into his campsite looking half dead Santell naturally offers him water but the man steals Santell’s horse. Santell takes a shot at him. The man rides off but he drops his shotgun. It’s a real fancy shotgun. Santell naturally picks up the shotgun and starts walking. He reaches a small town but when the townsfolk see that shotgun they get really edgy and uncomfortable.

Then Santell finds himself accused of being Travers, a escaped convict who killed two of the townspeople a couple of days before. Travers always carries a shotgun, just like the one that Santell is now carrying.

Then Marshall Deckett (Stephen McNally) arrives. Santell assumes his problems are over. Deckett has spent four months tracking Travers. He knows what Travers looks like. The whole misunderstanding will be cleared up.

But that’s not what happens. Deckett intends to take him to Denver to be hanged even though he knows he’s got the wrong man. When Santell figures out why Deckett is doing this he realises just how bad a situation he’s in.

Santell gets away but he’s now a hunted man. And the girl is hunted as well. The girl is Janet (Felicia Farr). Initially she’s unwilling to go with Santell but later she changes her mind. She believes Santell is innocent but there’s more to it than that, which we’ll find out later and I won’t spoilt things by giving any indication as to her motivations.

The main part of the movie is a manhunt story and it’s a manhunt played out in some impressive settings.

Interestingly Santell loses his gun really early on. For most of the movie he’s unarmed. He’ll have to rely on his wits and on steely determination. It’s fun seeing the way the movie deals with this problem - how can you have a climactic gunfight if the hero doesn’t have a gun? But it’s a western. There has to be a climactic gunfight. In fact the movie solves the problem pretty well.

A good western always benefits from having a really nasty villain and this movie has a particularly vicious villain. The fact that the villain, Deckett, is a lawman makes things more interesting. I’m not going to hit at Deckett’s motivations save to say that he becomes increasingly obsessed, unhinged and out of control. It’s a fine performance by Stephen McNally.

Felicia Farr makes an excellent heroine. Janet has her own deeper motivations which Farr conveys to the viewer without going over-the-top.

Then there’s Audie Murphy. By this time he was an experienced actor and was perfectly capable of handling complex roles. His role here is not as demanding as the one he played in the superb No Name on the Bullet a year earlier but Murphy doesn’t put a foot wrong. He plays Clay Santell as a man who is bewildered by the situation he’s found himself in but he’s stubborn and has no intention of allowing himself to be railroaded. He’s not going to be gunned down like a dog.

Director George Sherman spent his career making mostly B-features but Hell Bent for Leather proves that he was more than competent. Sherman made a lot of westerns but a few notable non-westerns including the very fine 1948 film noir Larceny.

The movie was shot in colour and in the Cinemascope ratio. There’s some wonderful location shooting. This is a fine-looking movie. Clifford Stine did the cinematography and did a great job. This may not have been a big-budget picture but it demonstrates that if you have good locations and you know what you’re doing you can still make a top-notch western. Sherman and his crew knew what they were doing. Having a solid cast helps, and this movie has that as well.

Hell Bent for Leather isn’t a big movie. It isn’t an epic. It doesn’t deal with really big themes. It’s just an extremely well-crafted movie with an uncomplicated but very tight plot (courtesy of screenwriter Christopher Knopf) with the three lead performers (Murphy, Farr and McNally) all delivering excellent performances. Everything just works.

When I say there are no big themes that’s not to say that there’s no thematic content at all. If there’s a theme here is that grief and anger warp people’s judgment with often tragic consequences. The townspeople believe Santell is Travers because they want to believe it. They want to believe that they’ve found a dangerous murderer and now they’re going to hunt him down. They don’t want to stop and think things through. They don’t want to admit that Santell’s story of mistaken identity is entirely plausible. They just want to lash out. The movie makes its points without ever resorting to speech-making. The message is there and the audience doesn’t need to be beaten over the head with it.

The Region 2 DVD from 101 Films offers a superb anamorphic transfer.

Hell Bent for Leather is an unassuming western that could easily be overlooked but actually it’s a top-notch western and it’s highly recommended.