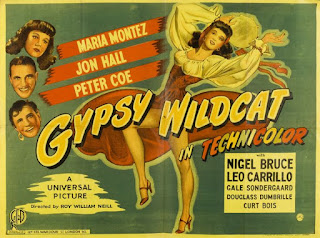 Gypsy Wildcat is one of the Technicolor adventure/romance romps that Maria Montez made at Universal in the mid-40s.

Although she was born in the Dominican Republic and was labelled the Caribbean Cyclone there was nothing Caribbean about Maria Montez. She was Spanish. Her father was a Spanish diplomat. She had that particular kind of fiery Spanish beauty. She specialised in exotic roles such as Arabian princesses and Pacific island queens. This time she’s a gypsy girl, but she has a secret.

As with some of her other movies (such as White Savage) the setting is very vague. The story takes place in what is essentially an imaginary land. It’s presumably somewhere in Europe and since there are bows but no firearms we can assume it’s the late Middle Ages. The gypsy tribe led by Anube (Leo Carillo) has arrived in the lands of Baron Tovar (Douglass Dumbrille). But trouble is following them. Carla (Montez) and Valdi (Curt Bois) see a man fall dead from his horse with an arrow in him. A man (we later find that he is Michael, played by Jon Hall) appeared to be in pursuit of the dead man. But Carla and Valdi do not actually see Michael kill this man. 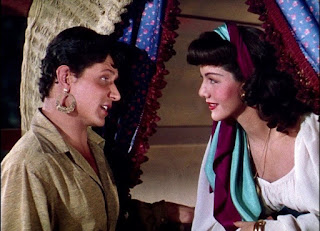 The gypsies naturally find themselves suspected of murder. Michael has taken refuge in their encampment and Carla is determined not to betray him to Baron Tovar’s soldiers. She feels sure that he is no killer.

It all gets a bit complicated. The baron is determined to bring the killer to justice but we suspect that the baron probably knows quite well who the killer really is. We don’t trust this baron.

The gypsies are threatened with all sorts of fates. Some of the gypsies would like to hand Michael over to the baron. Tonio (Peter Coe) would certainly like to do this. He’s in love with Carla and he’s insanely jealous of Michael to whom Carla is clearly attracted. 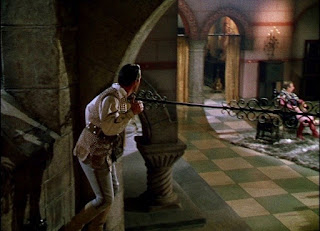 Of course things are not quite what they seem. There’s that medallion that Carla wears. It has some significance, and Baron Tovar recognises its significance.

There’s plenty of action, the heroine and the hero as well as the gypsies are in great danger and people get thrown into dungeons. There are daring escapes from certain death. It’s all great fun.

It’s a very lighthearted movie although there is one unexpected rather dark moment towards the end.

Nigel Bruce shows up briefly to steal a few scenes as the sheriff who is going to conduct Carla’s wedding, a wedding she wishes to avoid at all costs. 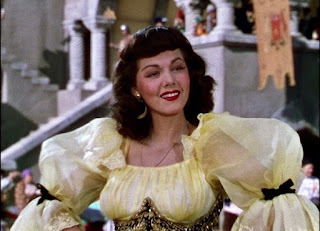 There’s the usual mixture of romance, adventure and comic relief and there’s lots of singing and dancing by the gypsies.

One weakness in this movie is that Baron Tovar as played by Douglass Dumbrille is not the larger-than-life melodrama villain that the story really needed. HIs performance is much too restrained.

Jon Hall is a decent enough hero. Gale Sondergaard is good as the fortune-teller Rhoda.

But this is a Maria Montez movie and she takes centre stage, and that’s as it should be.

Maria Montez became, for a very brief moment, a very big star. It was never going to last because she really was a very limited actress. She’s one of those actresses of whom it’s been said with some justice that they are stars rather than actresses. Miss Montez was never going to have a long career as a star because lighthearted adventure/romance romps were the one thing she could do. But it was something that she did supremely well. She was gorgeous, she had screen presence and she had star quality. For a few brief years her star shone very brightly indeed. 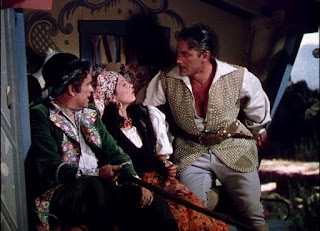 Gypsy Wildcat is included in the new three-movie Maria Montez-Jon Hall Blu-Ray set from Kino Lorber. The transfer is excellent and there’s an audio commentary.

Maria Montez’s movies are all delightful and this is no exception. She doesn’t do any real acting here but she doesn’t need to. She just does the Maria Montez thing that she did so well and it’s enough.

I’ve also reviewed Siren of Atlantis (1949) with is Maria Montez’s best movie by far, a movie in which she does some quite creditable acting. And I've reviewed another fine Maria Montez movie, Arabian Nights.