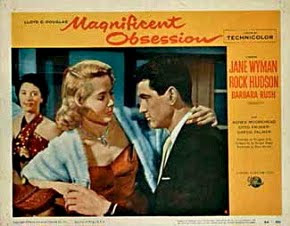 Even by the standards of Douglas Sirk’s 1950s Hollywood movies Magnificent Obsession is an outrageous concoction. Based on a novel by Lloyd C. Douglas, a novel described by Sirk as trash, it may well be the ultimate in cinematic high camp.

Rock Hudson is wealthy playboy Bob Merrick who is injured testing his high-powered speedboat. The resuscitator used to save his life belonged to a saintly doctor with a heart condition, and just at the moment the machine was being used to save Merrick’s life the saintly doctor has a heart attack and dies, so saving Merrick’s life has cost him his life. The saintly doctor’s wife Helen (Jane Wyman) and daughter Joyce and his faithful nurse (Agnes Moorehead) blame Merrick for his selfish hedonistic lifestyle. Merrick is consumed with guilt, and while trying to make amends he falls in love with the doctor’s widow. Unfortunately he is the unwitting cause of another accident, an accident that costs Helen her sigh 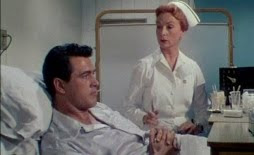 But all this was somehow destined to be, and it leads Merrick to local artist Edward Randolph (Otto Kruger). It turns out that Randolph and the saintly doctor both followed the same semi-mystical cult, a cult based on service, self-sacrifice and huge quantities of smarmy self-satisfaction. Randolph assures him that this philosophy will become a “magnificent obsession” for him as well. Merrick changes his ways and becomes a dedicated doctor, but what he really wants is Helen’s love. Fate has a surprise in store for him, when all the threads of his life will converge.

Reading some of the online reviews of this movie I’m staggered that so many people have so spectacularly missed the point of this movie, and really believe Sirk expects us to take all this at face value. The outrageous

use of unlikely coincidences, the weird cultism, the truckloads of saccharine sentimentality, the cloying acting styles of Hudson and Wyman, the bizarrely over-ripe performance of Otto Kruger, the chocolate box visual style - apparently none of these things was enough to indicate that perhaps Sirk’s intentions were ironic. And the music! More strings and angelic choir voices than you’ve ever heard in one movie!

But of course this is also melodrama. Not a movie with melodramatic tendencies, but pure melodrama and it adhere rigidly to the rules of melodrama. There are no coincidences in melodrama - it’s all the inevitable working out of one’s fate. Merrick and the saintly doctor have their encounter with death at the exact same moment because Fate (or possibly a Higher Power) has ordained it. And Merrick had at one time been studying to become a doctor, so it’s no accident that the man whose life intersects his at this fateful moment is a doctor. And Edward Randolph is a painter, also no coincidence. As a painter he is a creator, 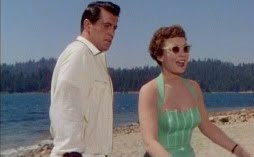 so is he ideally suited to being an emissary (or possibly even an avatar) of an All Powerful Unseen Creator. And the last thing you want in melodrama is for the actors to attempt anything resembling real acting - these are not real people, they are stock characters, and they’re meant to be played as stock characters. There’s the Selfish Playboy, the Faithful Nurse, the Devoted Wife, etc. Whether by accident or design Sirk found himself with the ideal cast for his purposes.

While the essence of the classical Hollywood cinema is the suspension of disbelief, the appearance of reality, in melodrama you’re not supposed to suspend your disbelief. You’re supposed to be aware of the story telling structure. And that’s the way this movie works.

In its own way it’s even more over-the-top than Written on the Wind. The weird Oprah-like cultism adds a delightfully strange touch. It’s lush, gorgeous, campy and magnificent, and I adored it.
Posted by dfordoom at 12:26 AM