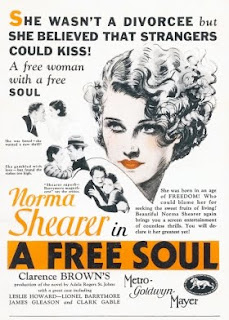 A Free Soul stars Norma Shearer as Jan Ashe, daughter of famous (and famously drunken) defence attorney Stephen Ashe (Lionel Barrymore). He’s brought her up as a free spirit, oblivious to the petty rules of respectable society. So when she meets the good-looking, sexy and very wicked mob boss, played by Clark Gable, her father has just successfully defended in a murder trial, it doesn’t take much to persuade to dump her decent but irredeemably dull boyfriend (Leslie Howard). She moves in with her handsome gangster boyfriend. Her father enjoys hanging out with mobster Gable and getting drunk in his gambling club, but when Gable announces he’s going to marry Jan dear old dad nearly has apoplexy.

Jan promises to give up her gangster if dad will give up the booze, but he soon starts to backslide, and Jan discovers that while slumming it with bad boys can be fun they can be extraordinarily difficult to get rid of when the novelty wears off. She finds her situation rapidly spiralling out of control, and tragedy naturally ensues. 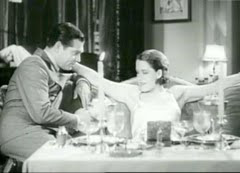 Barrymore overacts outrageously throughout the film, and even more outrageously in the climactic courtroom scenes, and picked up an Oscar for his performance. Gable’s performance is both menacing and smoulderingly sexy. Shearer is equally sexy, and very convincing in a fairly difficult role. She also gets to wear some extravagantly gorgeous clothes.

The character of Stephen Ashe was based on real-life attorney Earl Rogers, a legend fo 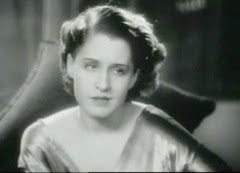 r both his boozing and his courtroom antics. It’s a movie that deals with sexuality, and particularly female sexuality, in a very grown-up and complex way, something the Production Code would soon put a stop to. Despite some excessively melodramatic moments it’s an effective movie that mostly avoids getting bogged down in moral platitudes, and Gable and Shearer certainly sizzle.

Barrymore’s performance is a delight for connoisseurs of over-the-top but gloriously entertaining bad acting. Opinion is divided over the merits of Norma Shearer, but I’m becoming more and more of a fan. An enjoyable pre-code treat.
Posted by dfordoom at 12:15 AM