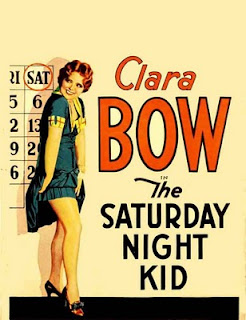 The Saturday Night Kid was one of Clara Bow’s first talkies, a breezy and slightly naughty little romantic comedy released in 1929.

Her talkies are mostly very difficult to get hold of, which has encouraged the old legend that she was unable to make the transition from silent films to talking pictures. She did have problems at first, but no-one who has seen the brilliant Call Her Savage could doubt that she did eventually adapt extremely well to the new form. And in The Saturday Night Kid there are no apparent problems at all with her performance.

Clara Bow plays Mayme, who works in a department store with her sister Janie (Jean Arthur). Mayme is sweet on Bill, newly promoted to floor-walker, but Janie has her eye on him as well. Mayme is a bit wild but she always looks out for her sister; sadly the same cannot be said of Janie. Janie will stop at nothing to steal Mayme’s man, and she also gambles and steals money from the store’s benevolent fund. And then places the blame on Mayme!

The plot is fairly thi 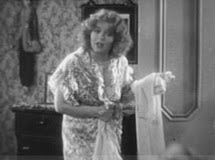 n, but with Clara Bow and Jean Arthur both in sparkling form it doesn’t matter at all. They’re helped by some snappy (and on occasions incredibly risque) dialogue. Edna May Oliver has fun as the girls’ supervisor, the terrifying Miss Streeter.

The scene with all the employees attending the morning inspirational meeting at the department store is an outrageous highlight. The movie is fast, amusing and a little bit wicked, and it’s great fun. Jean Arthur is superb, but as good as she is she’s still overshadowed by the great Clara Bow. Bow is very sexy, totally adorable, funny and in complete control. Look out for Jean Harlow in a bit part.
Posted by dfordoom at 1:22 AM