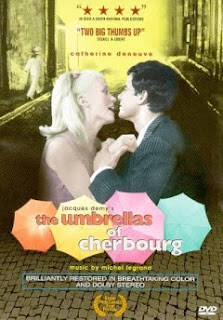 If you’re accustomed to the Hollywood way of doing musicals then Jacques Demy’s decidedly unconventional 1964 musical The Umbrellas of Cherbourg (Les Parapluies de Cherbourg) may seem rather surprising, although if you stick with it you’ll find it to be a delightful and oddly affecting surprise.

The plot is extremely simple, deceptively so, and the ending is both unexpected and yet feels absolutely right (and I’m not going to give you even a hint of the way the film ends). It is 1958, and Geneviève (Catherine Deneuve) is 17 and working in her mother’s umbrella store in Cherbourg. She is in love with a handsome young garage mechanic named Guy (Nino Castelnuovo). He lives with his aunt, who is being cared for by a girl named Madeleine. Guy is drafted and sent off to the war in Algeria. The young lovers spend his last night in France together, and of course Geneviève falls pregnant. 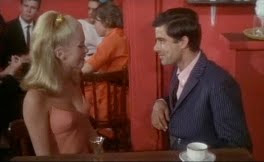 d by the great Michel Legrand) is used. Every single line of dialogue is sung, but there are no songs in the usual sense of the word, and the singing is more like a kind of declamation set to music than actual singing. It sounds bizarre, but the most bizarre thing about it is that it works, and that despite the strangeness of the method the viewer is still drawn in by the characters and believes in them. But it’s not just the way music is utilised - this movie also overturns our expectations of musicals in other ways, especially in regard to plotting.

The tone of the movie is distinctly odd. It looks fluffy and light, all paste 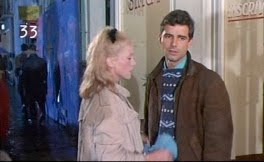 ls, but it combines this with a surprising degree of emotional realism and a mood of wistful melancholy.

It all comes together beautifully, a love story that isn’t the love story we thought we were getting but that is still completely satisfying. And Catherine Deneuve (of course) looks gorgeous. I highly recommend this one.
Posted by dfordoom at 10:33 PM