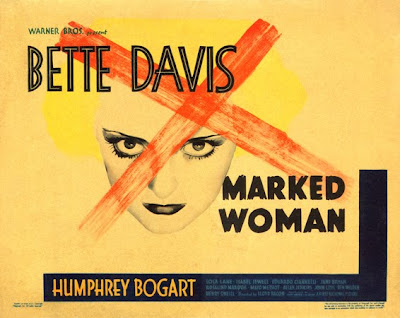 Marked Woman is a 1937 Warner Brothers crime movie, and a surprisingly hardboiled one.

Warner Brothers of course were renowned for their gritty early 1930s gangster epics and their 1940s film noir but the late 30s was a fairly bland time for crime movies. The Production Code had killed the classic gangster film and the American film noir of the 40s had not yet emerged in all its shadowy hard-edged glory. Marked Woman owes quite a bit to the studio’s earlier gangster movies and anticipates the cynical doom-laden film noir style.

The plot is based very loosely on the real-life case of mobster Lucky Luciano but the focus in the movie is not on the gangster at all (which represents a shift from Warner’s earlier gangster films). In this case the focus is on the girls who work in a night-club. It was a fairly respectable night-club until it got tak

e over by crime boss Johnny Vanning. He turns it into a high-class clip-joint.

The girls who work there aren’t overly thrilled about this, and they’re even less pleased that they are now “hostesses” but they don’t have much choice. Vanning control all the city’s night-clubs, and it’s better than working for starvation wages in a resectable job, assuming any of them could get respectable jobs.

One of the girls is Mary Dwight (Bette Davis) who’s been doing this kind of work to support her kid sister Betty through college. When Betty comes to the big city to visit her she tries to hide what she does for a living but unfortunately one of club’s clients has just been

murdered by Vanning’s henchmen and the girls (including the innocent kid sister) find themselves arrested on suspicion by the young and zealous DA (Humphrey Bogart). Betty is soon drawn into this twilight world and Mary discovers there is a much higher price to be paid than she ever expected.

Bogart hadn’t yet quite perfected his screen persona and he’s actually rather dull. It’s the women who dominate the movie in any case. Mary and her friends are all complex three-dimensional characters an there are fine performances by all the actresses, especially Lola Lane as the cynical but likeable Gabby and Isabel Jewel as the ditzy but sympathetic Emmy Lou who unwittingly drags Betty into the word of big city vice.

And then there’s Bette Davis. This is Bette Davis in full flight, chewing scenery like there’s no tomorrow. At times she goes completely over-the-top but being Bette Davis she somehow gets away with a performance that no-one else could have pulled off.

Lloyd Bacon was a reliable and very competent director and his direction is tight, well-paced and stylish. In 1937 the Production Code was making this sort of subject matter difficult to deal with but Marked Woman manages to avoid being sentimental or too obviously moralistic. Even the ending is quite satisfying.

This is a classic of hardboiled film-making. Highly recommended.
Posted by dfordoom at 1:58 PM