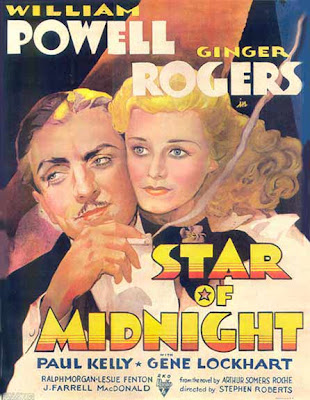 Any movie made in the 1930s starring William Powell as a top-flight attorney who is also a part-time amateur detective is pretty much guaranteed to be fun. And Star of Midnight does not disappoint.

Powell had made the move to MGM in 1934 but this 1935 mystery thriller was made at RKO. It manages quite successfully to maintain the glamorous sophisticated feel of Powell’s MGM movies.

The plot is fiendishly complicated, perhaps even too complicated, but these sorts of 30s mysteries rely mostly on style, witty dialogue and classy acting so it doesn’t do to get too stressed out about following every one of the countless plot twists.

The title does not refer, as you might think, to a jewel but to the star of a musical comedy called Midnight. The star, Mary Smith, disappears in the middle of a performance. Lawyer Clay Dalzell (Powell) has already found himself involved in his young friend Tim Winthrop’s search for his missing lady love Alice as well as being roped in by the beautiful young social butterfly Donna Mantin (Ginger Rogers) to retrieve some compromising letters from a mobster. Dalzel

l’s life becomes even more fraught with complications when a newspaper gossip columnist gets gunned down in his living room.

Dalzell feels sure that all these events are somehow connected, but finding the link that binds them together is easier said than done. He doesn’t have to solve the crime alone though - Donna Mantin is determined to help whether he wants help or not. It’s the least she can do for the man she’s going to marry. Dalzell has no i

ntention of marrying her, but Donna has made up her mind and when Donna makes up her mind about something there’s no point trying to dissuade her.

For many years I used to think I disliked Ginger Rogers. I have no idea why. I’ve seen several of her films recently and I’ve found her to be a delightful comic actress. She really sparkles in this one and she and Powell work to

gether superbly. Powell of course is terrific, as always. The supporting cast is a little uneven but Paul Kelly is fun as the gangster Jimmy Kinland who may or may not be involved and may or may not be sincere in offering his assistance to Dalzell.

It’s all splendid breezy fun, perhaps not quite in the same league as other similar William Powell vehicles of this era such as Jewel Robbery or The Thin Man but still very much worth seeing.

Sadly, I believe this one has not been released on DVD.
Posted by dfordoom at 6:20 PM