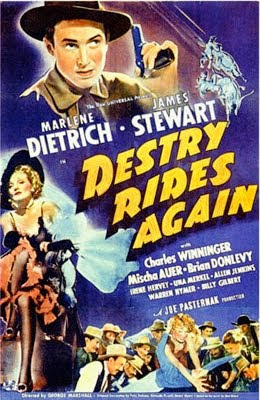 A comedy drama musical western sounds like a combination of way too many genres in one movie but Destry Rides Again actually works rather well.

The town of Botteneck is a lawless place even by Wild West standards. When the sheriff tries to take action against the crooked poker games on the Last Chance Saloon he mysteriously disappears. The crooked card games are just the tip of the iceberg, a way of accumulating enough landholdings to hold the cowmen to ransom when they need to drive their cattle through the surrounding country. The saloon is the centre of a corrupt cabal which includes the very oily mayor, Hiram Slade.

Tom Destry Jr (James Stewart) has been a successful lawman in Tombstone but he’s not what Dinsdale expects. He’s

not what anybody expects. He’s a polite well-spoken young man who doesn’t even carry a gun, and who abhors violence.

Destry may appear to be a milksop but he has a very determined streak. He really does intend to clean up Bottleneck.

He immediately attracts the attention of Frenchy (Marlene Dietrich). Frenchy is the main attraction at the Last Chance Saloon. She’s a singer, but she’s

also part of the criminal gang that runs the town. After first attempting to kill Destry in a violent rage she comes to realise that she kinda likes the guy. That maybe she’s even a bit in love with him. Whether she’s going to be an ally or an enemy remains to be seen. First Destry needs to find out what happened to the previous sheriff.

This the early James Stewart, before he started playing darker and more interesting roles in the 50s. He’s perfect for the role and you can’t really find any way to dislike him. Dietruch has fun as Frenchy and she gets to sing several songs, the most notable being the wonderful The Boys

in the Back Room. She and Stewart seem an unlikely combination but they work very well together.

It’s a movie that probably has no right to work at all but it’s so well-crafted and the performances are so enjoyable that if you just go with it you’ll find yourself having a pretty good time.
Posted by dfordoom at 4:20 AM