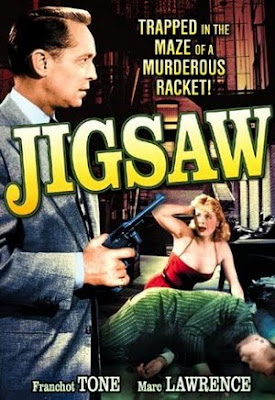 Jigsaw is a good example of the dangers of believing the IMDb when it tells you that a movie is a film noir. This 1949 B-movie is most certainly not a film noir.

Howard Malloy (Franchot Tone) is a virtuous crusading Assistant DA. His pal Charlie Riggs is a virtuous crusading newspaperman. They uncover a dastardly right-wing group called The Crusaders which is making a fortune selling tie pins and badges to its members. You might think that’s a pretty unlikely way to make a fortune but logic is not exactly this movie’s strong point.

Malloy discovers that this group has links to many influential people in business and government, and he meets their most dangerous agent - a beautiful blonde nightclub singer named Barbara Whitfield. The plot meanders about pointlessly until the final showdown in an art galley.

The movie was later re-released as Gun Moll in a

The acting is uniformly awful but Jean Wallace who plays the nightclub singer deserves special mention for one of the worst performances ever put on film. The cringe-inducing dialogue and clunky script did nothing to help the actors. Fletcher Markle’s ham-fisted directing is the icing on the cake.

This is political propaganda at its crudest, a movie that bludgeons the viewer with its message that right-wing conspiracies are everywhere and that they can only be defeated by abandoning dangerous concepts like freedom of speech.

The only merciful thing about this movie is that it only runs for 70 minutes. It’s 70 minutes of unrelieved tedium. Maybe not the worst movie ever made, but it’s definitely a contender.

There are brief cameos by several big stars who must have bitterly regretted being involved in this cinematic fiasco.
Posted by dfordoom at 4:49 PM