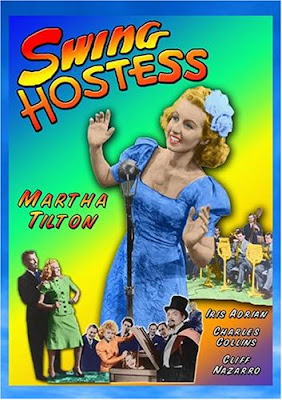 There is one major reason to see the 1944 musical Swing Hostess and that’s the fascinating glimpse it provides of weird forgotten technologies. Like the telephone jukebox.

It sounds like an outrageous idea, but it really existed. These were non-automated jukeboxes. You put your coin in the jukebox, then picked up the attached telephone which connected you to an operator in a central control room. This served perhaps several dozen jukeboxes in various locations and contained banks of turntables, one for each jukebox. The operator then played the requested record which was transmitted through the telephone line to the jukebox. Strange but true.

The heroine of this movie, a would-be singer named Judy, gets a job as a jukebox telephone operator while waiting for her big break. We get to see this bizarre operation in action. A friend suggests she should make a record as a kind of early version of an audition ta

pe, and this affords us yet another fascinating glimpse of vanished technology as we get to see a 1940 recording studio in operation, with the recordings made directly onto vinyl. This movie is a treasure trove for old technology junkies.

Back to our story. The ageing owner of the recording studio has discovered a tall blonde singer and has decided she’s going to be the next big star. He has no idea if she can actually sing or not, but she’s tall and blonde and that’s good enough for him. In fact Phoebe can’t sing at all, but there’s a mix-up and a re

cording of Judy’s song gets released under Phoebe’s name. This gets Phoebe a job as singer with the famed Benny Jackson Orchestra which is about to start a season at a new night-club. Judy had been desperately hoping to land this gig.

The plot revolves around a series of further confusions as Judy and her pal and agent Marge try to sort things out so Judy can get her big break after all. Judy and Marge live in theatrical boarding house inhabited by assorted magicians and acrobats who all pitch in to help.

Yet another interesting thing about this movie is that it’s a musical B-movie, made by Poverty Row studio PRC (famed for the incredible cheapness of most of their movies). In spite of this it manages not to look too shoddy and it does have a certain charm.

The comic relief provided by Benny’s offsider Bobo and by Judy’s pals in the boarding house is less painful than in most American movies of this era. The acting is generally not too bad, and Martha Tilton is likea

ble enough as Judy. She was in fact better known as a singer than as an actress and sang with Benny Goodman’s Orchestra so she was a fairly substantial singing star and carries off the musical numbers with ease. And as an actress she’s certainly passable.

The songs are decent enough as well. All in all it’s 76 minutes of pretty reasonable entertainment.

It’s in the public domain so it’s easy enough to get hold of (and can of course be downloaded legally). The downloaded print I saw was pretty rough but watchable. have no idea if the various DVD releases are any better. If you can pick it up cheaply it’s worth a look.
Posted by dfordoom at 11:49 PM