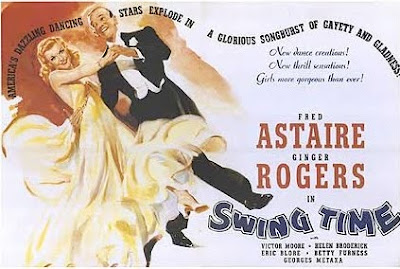 Swing Time was the sixth of the Fred Astaire-Ginger Rogers musicals and is often regarded as their best. In fact in many ways it’s a complete mess of a film, but somehow it works.

Fred Astaire is Lucky Garnett, dancer and gambler. After the other members of the theatrical troupe in which he’s performing sabotage his wedding he is given one last chance by the prospective bride’s father. If he goes to New York and comes back with $25,000 he’ll have proved himself responsible enough, and the wedding can go ahead. Lucky reaches New York, but his plans for making that money are disrupted when he meets dance teacher Penny Carroll (Ginger Rogers). It isn’t love at first sight 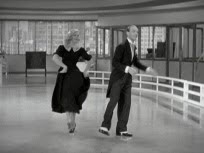 , in fact on her part it’s hate at first sight, but somehow they seem destined to be thrown together.

The ramshackle plot throws numerous obstacles in their path but of course you know that in the long run nothing will be able to keep them apart.

That the movie works is no thanks to George Stevens, surely one of the most ponderous of all Hollywood directors of that era. His direction is uninspired and it’s undoubtedly due to him that the movie is too long. It’s also no thanks to the writers. Half a dozen people worked on the script, and it shows. It’s all over the place.

There are other factors counting against the film as well. Lucky has the kind of gratingly unfunny comic sidekick that ru 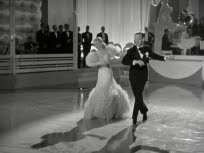 ined so many American movies of that era. In this case it’s Victor Moore, and like me you’ll probably spend the whole movie hoping he gets run over by a bus. And there’s a sub-plot involving him and Penny’s buddy from the dancing school, Mabel (Helen Broderick). She’s not as bad as Moore but a little bit of Helen Broderick goes a long way.

The movie works for three reasons. Firstly, Jerome Kern’s music is superb (several of the songs quickly became standards, including A Fine Romance and The Way You Look Tonight). Secondly, it features fabulous art deco-inspired sets and looks wonderful. And thirdly and most importantly, it has Fred and Ginger. When Fred and Ginger are together the movie sparkles. And their dance duets are simply stunning. The dance duets in fact contain all the plot exposition and all the emotional resonance, and all the sexual chemistry, that the movie requires. 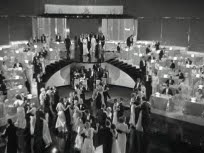 Astaire and Rogers had both developed as actors as well as dancers by this time. Whatever other flaws the movie has their performances are faultless. Ginger Rogers is especially impressive.

It’s also an object lesson in how to use dance routines for more than just spectacle. Astaire was becoming steadily more ambitious in his choreography but most crucially when these two dance together they really dance together. The dancing conveys a wealth of emotion. This is not a romantic comedy with musical numbers tossed in - the music, the songs, the dancing, are the heart and soul of the movie.

Astaire and Rogers are in fact so good that even with so many strikes against it Swing Time ends up as a triumph.

This is an example of a m 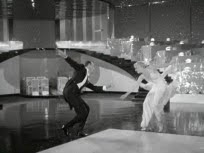 ovie that I actually appreciated more after listening to the commentary track by John Mueller (apparently a major authority on the Astaire-Rogers films).

He makes some interesting points, including the fact that there was not a single onscreen kiss between Fred and Ginger until their eight film together. This was due to reluctance on Astaire’s part. It was partly because he claimed to feel uncomfortable doing love scenes, and partly because his wife didn’t like the idea of his kissing other women. But Mueller claims the main reason was that for Astaire an onscreen kiss would have been an admission of failure. Astaire considered that the dance duets in the movies were the love scenes and that if they worked properly they would convey everything that needed to be conveyed about the way the characters felt about each other.

The print used for the DVD release is unfortunately not all that great, but it’s perfectly watchable, the sound quality is excellent and the disc includes quite a few extras.
Posted by dfordoom at 7:10 PM