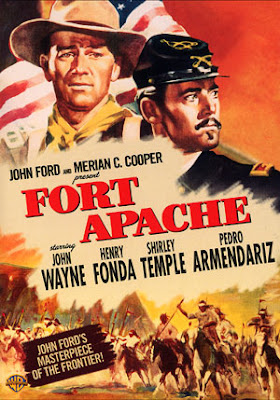 Fort Apache was the first movie in John Ford’s informal “cavalry trilogy” and it’s one of the great westerns. Ford had had a commercial disaster with The Fugitive in 1947 and desperately needed a hit, and Fort Apache put him back on top.

Lieutenant-Colonel Owen Thursday (Henry Fonda) had been a distinguished general in the Civil War but like most regular army officers he’d reverted to his former rank in peacetime and his career is languishing. He regards his appointment as the new commanding officer of Fort Apache in the Arizona Territory as an insult and is keen to find some way to win glory. He knows nothing about the Apaches and is unwilling to take the advice of experienced officers like Captain Kirby York (John Wayne). His first step is to counter what he sees as unpardonable slackness in his new command. Some officers don’t even wear full uniform!

He was accompanied to his new posting by his daughter Philadelphia (Shirley Temple), who immediately falls in love with a handsome young lieutenant. He’s the son of the Regimental Sergeant-Major so to Thursday he’s not really one of the “officer class” and he has no desire to see his daughter marry the son of a mere NCO.

There’s trouble brewing with the Apaches. Cochise has led most of the Chiricahua Apaches over the border to Mexico in protest against the corruption of the local Indian agent who is more interested in selling Cochise’s people rotgut whiskey than blankets and decent food. Bringing Cochise and his people back to the reservation appeals to Thursday as a way of making a name for himself. Thursday’s foolishness will lead inevitably to tragedy.

Ford always liked to mix romance and comedy with the drama even in his darkest films and it often worked surprisingly well, making the tragedy even more poignant. That’s certainly true in this case.

There was a lot of nonsense talked in the 70s about the new breed of “revisionist” westerns that supposedly did ground-breaking things like showing the Indians’ point of view and exposing the reality behind the myths of the Old West. This was utter humbug. Ford had been doing such things for decades, and he did it more intelligently and more subtly. John Ford invented the revisionist western.

I’ve never liked Henry Fonda as an actor but I have to admit he’s superb here, resisting the temptation to overplay the character or to play him as a mere bumbling fool. Owen Thursday is a proud brave man who makes some disastrously foolish decisions but Fonda gives him dignity, and that’s the element that really makes this movie work. John Wayne, one of classic Hollywood’s most underrated actors, gives another fine performance. Like Thursday, Captain York is a complex character, torn between his duty of obedience as an officer and his loyalty to the army on the one hand and his belief that Colonel Thursday is tragically wrong and is leading his command to disaster. York is also a deeply honourable man. He has no great love for the Apaches but he can see their point of view and he believes the best way to deal with Cochise is to deal with him honourably.

There’s a fine supporting cast with Victor McLagen, Ward Bond and Shirley Temple all very solid. It’s the first time I’ve ever seen her in an adult role and she’s quite capable.

In Ford’s westerns from Stagecoach onwards the Monument Valley locations are as much the star of the films as the lead actors. In Fort Apache his director of photography, Archie Stout, used infra-red film (developed during the war for military use) to achieve startling effects. It was tedious to use, requiring special make-up for the actors, but both Ford and Stout considered (quite correctly) that the results were worth the extra trouble.

Considering Ford’s reputation for not rehearsing action sequences and for disdaining the idea of planning shots in advance the action scenes in this movie can only fill the viewer with awe. They really are magnificent, not just spectacular but deeply moving as well (especially the scenes of Thursday’s charge and its tragic consequences).

Warner’s Region 1 DVD includes a brief documentary on John Ford’s Monument Valley. One of the reasons that Ford loved making movies there was that he got on very well with the local Navajo people and his films provided much-needed employment for them and pumped a great deal of money into the local community. On one occasion when they faced starvation because of an incredibly severe snow storm he used his military connections (as a former naval officer) to arrange a military air-drop of supplies for the Navajo and their animals. He’s still remembered with a great deal of affection by the Navajo. That’s why all the Indians in Ford’s westerns are played by Navajos!

A great western and a great movie.
Posted by dfordoom at 12:15 AM