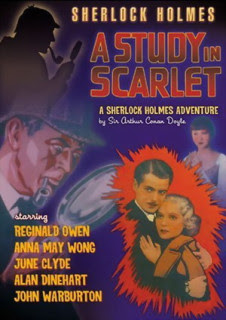 The 1933 movie version of Conan Doyle’s A Study in Scarlet stars Reginald Owen as Sherlock Holmes. This was his only performance in the role and he does a very decent job.

A mysterious apparent suicide on a train is followed by further deaths, some being obviously murder while others also appear at first to be suicides. The widow of the first victim engages Sherlock Holmes when she finds herself left without a penny although her husband was a wealthy man with considerable expectations. 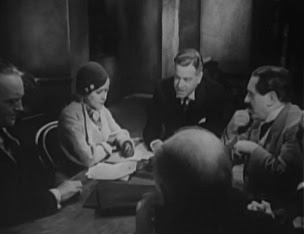 Holmes finds himself drawn into a mystery involving a syndicate known as the Scarlet Ring. The members of the ring are to share in the proceeds of a certain venture which of course turns out to be a spectacular crime. The conditions governing the Scarlet Ring are that when the proceeds of this crime finally come to be shared out they will be distributed amongst the surviving members. This is an obvious enticement for one or more members of the ring who are even more dishonest than the others to thin out the numbers in order to maximise their share. In fact if only one member remains alive he will collect the lot. The daughter of the first victim has been invited to join the Scarlet Ring. She has no idea of the nefarious criminal activities this group is mixed up in and her husband-to-be believes her to be in great danger, an opinion shared by Sherlock Holmes.

If the movie has one major fault it is that it gives away rather too much of the plot rather too early. 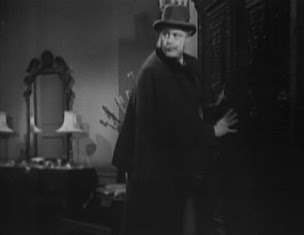 Warburton Gamble is a dull and colourless Dr Watson. Anna May Wong as Mrs Pyke, the widow of one of the murdered members of the conspiracy, is  the most impressive member of the cast although Reginald Owen makes a pretty fair Sherlock Holmes.

The most bizarre thing is that Holmes’ address in this movie is 221A Baker Street. The plot takes considerable liberties with Conan Doyle’s novel. 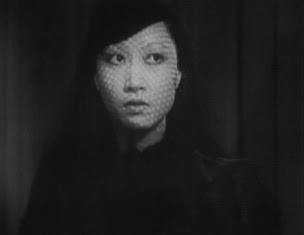 It’s in the public domain and the edition I saw (in a Mill Creek boxed set) suffered from poor picture quality and atrocious sound quality.

The movie is perhaps a little on the stodgy side but it’s reasonable entertainment.