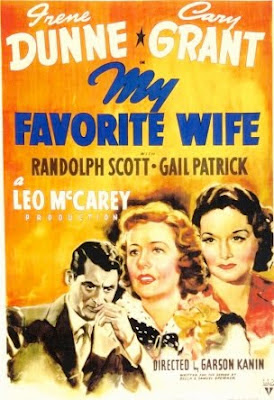 My Favorite Wife is a thoroughly delightful 1940 example of the screwball comedy. With Cary Grant and Irene Dunne as the stars you’re already on a winner.

Ellen Ardin (Irene Dunne) is the wife of Nick Arden (Cary Grant) but she’s dead. Well, sort of. Several years earlier she was lost at sea. She was seen disappearing beneath the waves after her lifeboat was swamped and since a number of years have passed it seem safe to conclude that she really is dead. The judge regards it as an open-and-shut case and declares her legally dead, allowing Nick to marry Bianca (Gail Patrick). So it comes as quite a shock to poor Nick when they get to the hotel where they’re to spend their honeymoon and who should he spot in the foyer but his deceased first wife. Ellen is very much alive. She has spent the last seven years marooned on an island, until finally she was picked up by a Portuguese freighter. Now Nick has one wife too many. That’s embarrassing enough, but which wife does he actually want? Since Irene Dunne is the star you get no prizes for guessing he wants Ellen. Or at least he’s pretty sure he does. He’s fond of both of his wives. After all if you marry a woman it generally means you’re fond of her.

If he’s going to pick up where he left off with Ellen, what is he going to tell Bianca? After all, it’s not exactly the sort of thing a woman wants to be told when she’s only been married for a few hours. You might think this was enough of a problem for one man to deal with but there’s worse to come. It transpires that Ellen wasn’t alone on the island. There were two survivors stranded on that island, and the second survivor was a man. A rather good-looking man named Steve Burkett (Randolph Scott). Just the two of them, alone together on an island for seven years. What could they possibly have found to do? Nick has a pretty shrewd idea.

It’s a good basis for a screwball comedy, offering opportunities for the wild confusions and misunderstandings so characteristic of the genre, and for the kinds of progressively escalating craziness equally associated with this type of film. A good set-up is not however enough to make a good screwball comedy. The situations need to be truly funny as well as crazy. Happily My Favorite Wife scores very heavily on this count as well with a sparkling screenplay that gives Grant and Dunne ample opportunities to demonstrate their considerable skills at this sort of comedy. 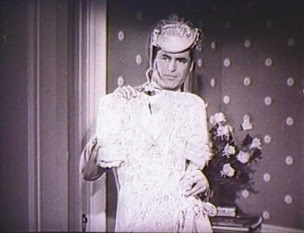 With a very capable supporting cast it all comes together perfectly. Randolph Scott is particularly good. Gail Patrick is the one weak link. Not that her performance is bad - she just doesn’t get the good lines.

Leo McCarey (who directed Grant and Dunne in the wonderful The Awful Truth) was to have directed but was hospitalised after a car crash. Garson Kanin took over and did a serviceable job, although had McCarey been at the helm it might well have been an even better picture. I picked this one up on a Cary Grant double feature Region 4 DVD. Picture and sound quality were truly atrocious, so there are clearly some bad versions of this movie floating around. The movie itself, although not quite in the top rank of screwball comedies, is thoroughly enjoyable.
Posted by dfordoom at 2:46 AM