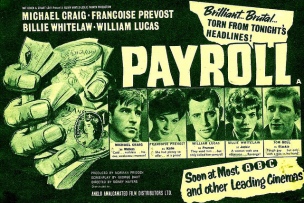 Payroll is a 1961 British crime thriller with no real claims to be a film noir but it does have some interesting features. It can be seen as a heist movie (and a very good one) but it can also be seen as a revenge movie. Unusually for 1961, it has a woman as the righteous avenging angel.

Johnny Mellors (Michael Craig) and his gang are planning a payroll robbery. They have a man on the inside, Dennis Pearson (William Lucas), who works in the payroll department. The firm involved is about to introduce a new high-tech armoured car on to the run. Most of the gang members assume the job will now be off but to Johnny this is is merely a challenge, and he has a plan. 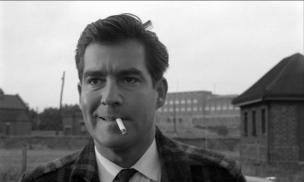 Most heist movies present a fool-proof robbery plan which nonetheless goes wrong. In this case things start going wrong well before the robbery. No-one but Johnny thinks they can get away with it. Of course things do go badly wrong in the actual robbery and a two men killed, including one member of the gang. Now they all face the prospect of the gallows.

Johnny has more problems than he realises. The widow of the murdered security guard sets out on a private campaign of vengeance. Most of the movie revolves around the increasing tensions within the gang as the gang members turn against each other, and on the widow’s increasingly successful efforts at revenge. 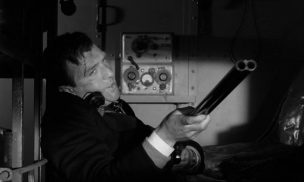 Johnny has other problems with women as well, from a completely unexpected quarter. At one point he tells his accomplices the newspapers will soon lose interest in the story because there’s no sex angle, but he will soon discover that there very definitely is a sex angle. Director Sidney Hayer handles the heist sequences extremely well. Payroll (1961) The whole film is typical of the excellent British thrillers of this vintage. Nothing overly fancy, but a very well-crafted movie. Shot in widescreen and black-and-white it looks great.

Michael Craig wisely underplays the psychotic Johnny Mellors so when he does erupt into violence it comes as a shock. Billie Whitelaw, Françoise Prévost, Kenneth Griffith and Tom Bell provide fine support. A very good crime thriller worth seeking out. Optimum’s Region 2 DVD is excellent.
Posted by dfordoom at 2:46 AM