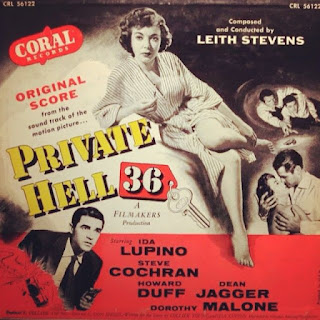 Private Hell 36 came out in 1954, fairly late in the Hollywood film noir cycle. It was made by The Filmakers, the production company set up by Ida Lupino and her then husband Collier Young. Young and Lupino co-wrote the script while Don Siegel directed.

It starts out as a fairly routine if well-made and well-acted police procedural. Off-duty LA cop Detective-Sergeant Calvin Bruner (Steve Cochran) stumbles onto a drug store hold-up. It seems like no big deal, until one the $50 notes found on one of the suspects (Bruner killed the other robber) turns out to be linked with a very big robbery in New York a year earlier. Bruner and his partner Detective-Sergeant Jack Farnham (Howard Duff) trace the stolen note to a night-club singer at the Emerald Club. She got the note as a tip. The singer is Lilli Malowe (Ida Lupino).

Lilli can offer only a vague description of the man who passed her the note but this is a big case and she is their only lead. She mentioned that the guy said he’d had a big day at the track. So the two detectives, accompanied by a willing if unenthusiastic Lilli, stake out the racetrack. It’s a job that requires patience and it takes a week to get results, during which time Bruner and Lilli fall for each other. 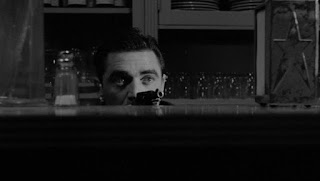 Lilli is a fairly hardboiled dame. She’s waiting for a man with lots of money. And Detective-Sergeants don’t make enough money for that sort of woman.

The racetrack stakeout eventually brings result, a suspect is pursued and is killed when his car plunges over a cliff. The proceeds of the New York robbery are scattered all over the hillside. Lots and lots of money. And nobody could possibly know exactly how much money  - there’s no way of knowing if this haul represents all of the money from the robbery. If some of the money were to disappear, were for example to find its way into somebody’s coat pocket, nobody would ever be any the wiser. It’s a big temptation for any cop, and it’s too much for Calvin Bruner. This is where the noirness of the movie starts to kick in, in a very big way. 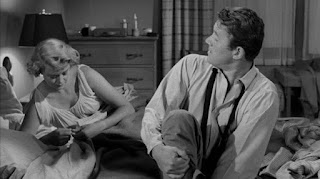 Farnham wants nothing to do with all this. He’s happily married with a kid and while it’s sometimes a struggle on a cop’s salary he’s always had the satisfaction of knowing that every penny they do have has been honestly come by. But Bruner is his partner and you can’t turn your partner in so Farnham finds himself a very reluctant participant in a very sordid undertaking. The money is stashed in a trailer Bruner has rented, trailer Number 36.

It all seems so simple, but of course it doesn’t turn out that way. Guilt is steadily gnawing away at Farnham and pretty soon the whole business shows signs of becoming uncomfortably complicated. Jumping every time the phone rings, the two cops become more and more jumpy and their once close friendship is soon in tatters. Things are closing in on them and that trailer full of money will become their own private hell. 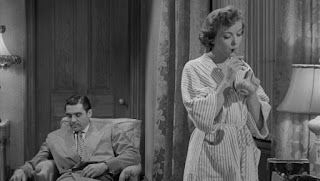 Film school types like to see every Hollywood movie of the 50s as an indictment of the American Dream. That whole “dark underside of the American Dream” thing has become one of the most tedious clichés in film criticism. Of course they also try to apply it to this film. The problem is that Farnham and his wife are not trapped in “stifling suburban conformity” - they’re happy, they have a pleasant little house and they have a good relationship. It’s the dissatisfied hedonism of Bruner and Lilli that seems shallow and empty. Lilli doesn’t love Bruner - she loves the idea of a guy with lots of dough. Bruner doesn’t love Lilli - he loves the idea of dating a glamorous night-club singer. Neither is ever likely to find happiness, and Lupino plays Lilli as a rather sad and tragic figure. She’s chasing the wrong things. Bruner is equally sad. He’s a good cop and he throws it all away, chasing an illusion.

The relationship between Farnham and Bruner is obviously a crucial element in the film. Bruner is unable to accept that Farnham may have found the recipe for happiness. He sees marriage as a trap to be avoided and his rejection of that kind of commitment is one of the things that dooms him. 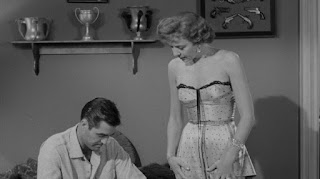 Steve Cochran was a good choice to play Bruner - he makes the character suitably selfish and egotistical without succumbing to the temptation to chew the scenery. Howard Duff was one of those honest journeyman actors who could always be relied upon for a solid performance. Dorothy Malone as Farnham’s wife Francey also resists the temptation to overact (something she was certainly capable of). Ida Lupino is wonderfully world-weary and cynical, but not too cynical. All the performances work splendidly.

A very fine B noir, and highly recommended.
Posted by dfordoom at 12:20 PM