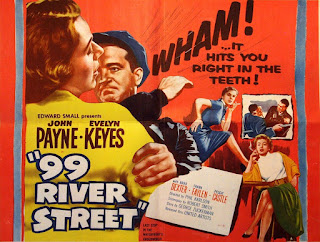 Payne is Ernie Driscoll, a prize fighter who almost made it to world champion. A cut eye cost him his title bout and it also cost him his career. He was barred from boxing on medical grounds - another punch on that eye and he could lose his sight permanently.

Now Ernie Driscoll drives cabs. It’s a long way from being almost world champion but Ernie could handle it OK if it weren’t for his wife Pauline (Peggie Castle). Pauline never lets Ernie forget that he’s a failure. When she married him she thought she was marrying a future world champion, and now she’s married to a cab driver. 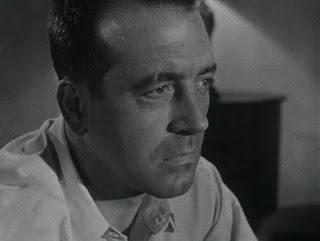 Ernie tries very hard to make a bad situation bearable. He is devoted to Pauline. He has plans to open a gas station when he saves up enough money. It’s not much of an ambition but it would be enough for Ernie if only Pauline were prepared to accept it. Instead the gas station idea just makes her more bitter and more scornful. Ernie doesn’t give up though. He still thinks that things will eventually work out. The poor sap still thinks that love can conquer all.

Then Ernie’s whole world comes tumbling down on top of him. Waiting outside the florist shop where she works to pick her up he sees Pauline in the arms of another man. The situation is actually much worse than he thinks. This other man is Victor Rawlins (Brad Dexter) and he’s a hoodlum. He’s not just a cheap hood - he’s a very nasty piece of work indeed. 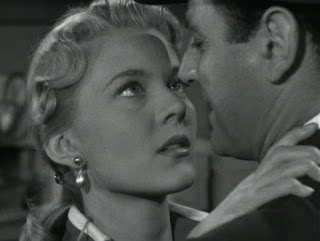 It’s already been a bad day for Ernie Driscoll but it’s going to get worse. First his friend Linda James (Evelyn Keyes) plays a very cruel practical joke on him. His friendship with Linda was entirely innocent. She’s an aspiring actress and he thought she was a nice kid. Now he realises that you just can’t trust anybody, especially dames.

Then comes the icing on the cake, as Ernie finds himself framed for a murder.

The only problem with this movie as a film noir is that Ernie Driscoll’s problems are not caused by some inherent weakness in his personality, nor are they the result of one bad decision. Ernie just has a spectacular run of bad breaks that could have happened to anybody. 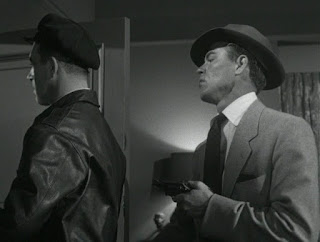 The movie does have a femme fatale though, in the person of Pauline Driscoll. The first time we see her we figure this dame is no good, and we’re right. Peggie Castle makes a fine femme fatale. Pauline is a real prize package. She knows Ernie’s weaknesses and she knows where to hit him so it hurts.

John Payne has never received his due as an actor. He gives a great performance. Ernie is not a classic noir loser. He is tempted by self-pity but he always snaps himself out of it. He knows that when you’re sinking under a barrage of punches that’s the time you have to show your class as a fighter and that’s the way he approaches life. As things get tougher for him he fights back harder. 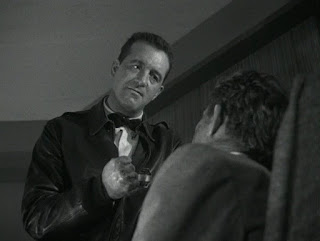 I found Evelyn Keyes to be rather irritating as Linda. She overacts and at times it seems a bit phony. Luckily the support cast is excellent, with Jay Adler being especially good as Christopher, a big-time fence who looks like a kindly grandfather but is both cunning and dangerous. Jack Lambert is fun as Christopher’s stooge Mickey, a particularly vicious character who likes nothing better than to hurt people. Brad Dexter is oily and treacherous as Rawlins, a man always only a hair trigger away from violence.

Director Phil Karlson made some superb B noirs and he demonstrates his mastery again here. This movie is tough and uncompromisingly violent and it moves with the relentlessness of a freight train. The opening fight scene is powerful and visceral. Karlson and cinematographer Franz Planer give this movie plenty of noir atmosphere and plenty of style.

MGM’s made-on-demand DVD release features a very good transfer but no extras. 99 River Street is a film noir that doesn’t pull its punches. Highly recommended.
Posted by dfordoom at 1:13 PM