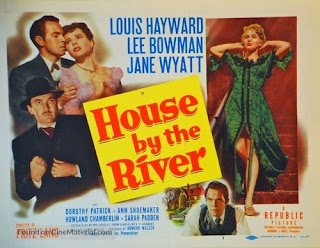 House by the River is rather unusual among Fritz Lang’s American films. It’s a period thriller, set presumably sometime in the late 19th or early 20th centuries. And this is unquestionably a gothic thriller.

This was a low-budget movie, made by the Republic studio. Republic was a Poverty Row studio although they did make the occasional A-picture. They were certainly not as low down the food chain as PRC where Lang’s fellow-countryman Edgar G. Ulmer spent most of his career. House by the River doesn’t suffer too badly from its low budget. Lang had adapted surprisingly well to his lengthy sojourn in Hollywood. None of his American pictures have the lavish budgets of his early German movies but Lang by this time needn’t need big budgets. His style had become much more economical with a much greater focus on character. What he did need was a decent cast, and in this instance he has that.

Louis Hayward is Stephen Byrne, an unsuccessful writer. As we gradually discover, he’s not really much of a success at anything. His brother John (Lee Bowman) is continually rescuing him from one scrape or another. And he’s certainly not much of a husband. When he first meet him he’s trying to seduce his wife’s maid. He is as unsuccessful at this endeavour as he is in everything else, but this time with much graver consequences. He ends up strangling the maid. 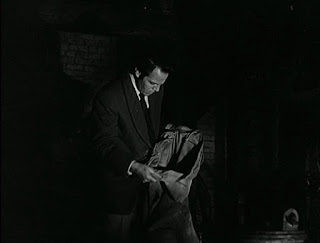 As he explains to his brother, it was an accident. It could have happened to anybody. It’s clear that nothing is ever Stephen’s fault. Life is always conspiring against him, causing publishers to reject his manuscripts, and now causing him to commit murder. Against his better judgment, John once again agrees to try to keep Stephen out of trouble.

This proves to be a very poor decision. The evidence at the inquest seems to point more towards John than Stephen, and Stephen does nothing to lessen these ill-founded suspicions against his brother. While John finds himself more and more enmeshed in a nightmare Stephen prospers. One day of course the reckoning will come for Stephen, but will it come too late for John? 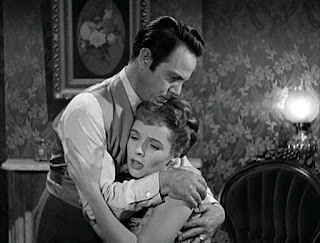 Louis Hayward does a very fine job. He gets the self-pity just right. Stephen is a boy who has never grown up, never accepted responsibility. His grip on reality is less than perfect. Much less. The whole world revolves around him. He assumes that because he wants to be a writer he must be one. It’s just those fools of publishers who can’t appreciate his talent. Now he has found a theme that will guarantee the recognition that he believes he deserves. Typically enough his choice of theme is thoroughly self-centred and selfish. He will use the murder he himself committed as material for the novel that will cement his reputation. And in fact the notoriety that surrounds the murder does establish his fame as a writer. Stephen is a nasty piece of work but he is so wrapped up in himself that he’s entirely unaware of it.

Lee Bowman does a capable job as John, while Jane Wyatt is very good as Stephen’s wife Marjorie. But it is Hayward’s performance that is crucial to the movie’s success and he  delivers the goods. 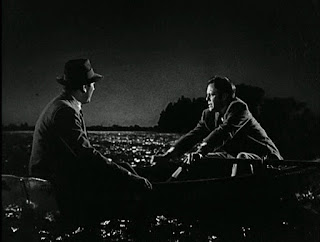 Edward Cronjager was a more than competent cinematographer. He rarely worked in either the film noir or gothic areas but when he did do so he proved himself quite capable, his most impressive work being the very underrated 1947 Technicolor noir Desert Fury. Lang and Cronjager evoke the necessary gothic atmosphere exceptionally well considering the modest budget they had to work with. The scenes on the river are suitably moody and ominous.

Film noir and the gothic overlap quite a bit, both genres tending to focus on doom and the remorselessness of fate, and Stephen Byrne’s story has that sense of inevitability about it that one associates with both genres. The nightmare that John Byrne finds himself living has that same sense of inevitability. John will always try to rescue Stephen, and he was always going to come to grief one day as a result. 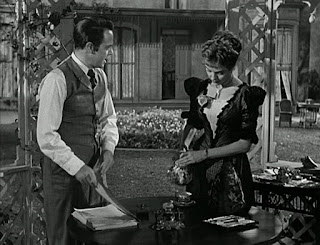 The Kino DVD is all too typical of this company’s output. Picture quality is mostly quite acceptable but there is some print damage. It’s certainly nowhere near up to the standard that a Fritz Lang movie deserves. Lang has been both lucky and unlucky where DVDs are concerned. It’s been a positive asset to his reputation that just about all his American movies have been released on DVD and are therefore accessible, but very few have been given top quality releases.

House by the River is an unusual but unjustly neglected part of Fritz Lang’s filmography. Lang and the gothic prove to be a good match and this movie is highly recommended.
Posted by dfordoom at 2:03 PM