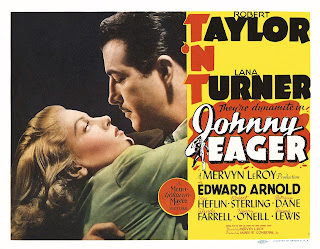 Johnny Eager is a 1941 MGM gangster movie that can, at a stretch, be seen as a proto-noir.

Robert Taylor was a major star at the time but he was thought of as being something of a lightweight, a pretty boy who was fine as a romantic lead but without much substance. Taylor would later develop into a very fine actor in rather dark roles in film noirs such as Rogue Cop and The Bribe. Johnny Eager can be seen as one of his first attempts to demonstrate that his acting really did have some depth.

Johnny Eager had been a notorious gangster before he was sent to prison. Now he’s out on parole and doing his best to go straight. He has a job as a cab driver and he is now a model citizen. His parole officer Mr Verne (Henry O’Neill) considers Johnny to be one of his greatest successes, a living proof that even hardened criminals can be successfully rehabilitated.

Unfortunately for the well-meaning Mr Verne, it’s all a lie. Johnny Eager is still running his criminal empire while putting on a remarkably convincing act. He maintains a cheap apartment in a poor neighbourhood as a front, but he only inhabits it when he gets a tip-off that his parole officer will be paying him a visit. 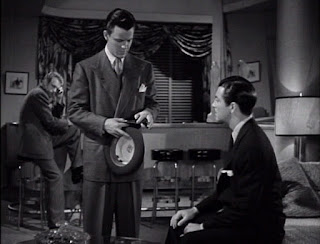 Johnny is the big boss of the city’s gambling rackets. His current project is to open up a dog-racing track. Apart from being a big money-spinner this will also be a convenient front and a useful place for laundering money. He has the politicians paid off but there is one major obstacle in his way, John Benson Farrell (Edward Arnold), the city’s incorruptible DA, and incidentally the man who sent Johnny to prison.

Everything is running fairly smoothly for Johnny until his parole officer arrives with two young female sociology students in tow. Lisbeth Bard (Lana Turner) is immediately attracted to Johnny and their paths are destined to cross again. Johnny is tiring of his current excessively needy girlfriend and Lisbeth soon takes her place. There are two problems associated with this romance. The first is that Lisbeth is the daughter of John Benson Farrell. The second is that Lisbeth falls in love with Johnny. 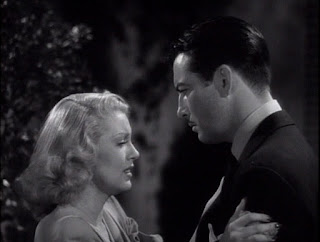 Johnny thinks the first problem can be easily dealt with. He sets Lisbeth up in such a way as to give him something big to hold over Farrell’s head, something that he can use to remove Farrell as an obstacle to his criminal activities. The second problem is more difficult. Johnny doesn’t take his relationships with women very seriously. His girlfriends come and go and he assumes that they understand that, and that they won’t become clingy. Unfortunately Lisbeth doesn’t work that way. Lisbeth doesn’t care that Johnny is a gangster, but she does care when he tries to give her the brush-off. This sets events in motion that will threaten the destruction of Johnny’s criminal empire and Johnny himself. 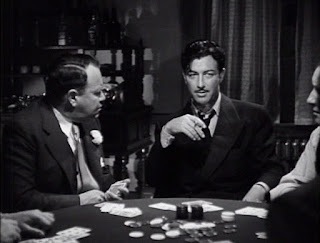 Robert Taylor is superb, as he always was when he was given a demanding role that allowed him to explore the darker side of human nature. Johnny Eager is both charmingly naïve (his knowledge of any subjects not related to crime is almost zero) and ruthless. He really knows very little about what makes people tick and his understanding of women is non-existent. He might be an anti-hero and a gangster but he’s difficult to dislike. Johnny Eager certainly has charisma.

Van Heflin, not yet a major star, is excellent as Johnny’s perpetually drunken sidekick Jeff Hartnett. Hartnett is a writer and an intellectual and seems on the surface of it to be an unlikely person to be mixed up with gangsters (although intellectuals do tend to be fascinated by criminals). Johnny claims that he doesn’t know why he lets Hartnett stay around him, but in fact Hartnett is his only true friend, the only person who doesn’t want something from Johnny. Hartnett always tells Johnny the truth. Those with the tedious habit of looking for gay subtexts may be tempted to look for one here. I personally find it rather irritating when any friendship between men is interpreted this way. I think the friendship between Johnny and Jeff Hartnett is more interesting without the gay subtext. 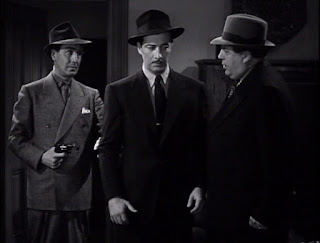 Lana Turner is surprisingly just a little on the bland side as Lisbeth. Or possibly she’s simply overshadowed by the very fine performances by Taylor and Heflin.

This movie was helmed by Mervyn LeRoy, always a reliable director of this sort of material.  Harold Rosson was in charge of the cinematography. They give the movie a definite atmosphere, and the noir feel is enhanced by Robert Taylor’s interestingly complex performance.

Johnny Eager is available as a made-on-demand DVD in the Warner Archive series. It’s an excellent transfer.

Johnny Eager is either an intriguing proto-noir or perhaps just a very early example of outright film noir. Either way it’s a very good movie and is highly recommended.
Posted by dfordoom at 1:47 PM