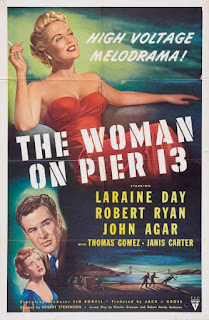 The Woman on Pier 13 is notorious as being (under its original title I Married a Communist) the movie Howard Hughes allegedly used to test the political reliability of RKO employees. The popular story is that if someone refused to work on the film they were finished at the studio. It makes a good story even if it probably isn’t true. People want to believe it. One story that people don’t want to believe is that The Woman on Pier 13 is actually a pretty good little movie. It’s also a classic film noir.

The plot is prime noir territory. A man wants to put his shameful past behind him but finds that the past casts a very long shadow. A shadow from which escape may well be impossible. In this case the man is Bradley Collins (Robert Ryan), a successful shipping executive with a bright future ahead of him and with a charming new wife, Nan (Laraine Day).

Only Bradley Collins wasn’t always Bradley Collins. There was a time when he was Frank Johnson, a very active Communist Party agitator and a faithful party bully-boy. Frank Johnson believed that if a few heads had to be broken, and a few people killed, then that was a small price for establishing a worker’s paradise in the US. At that time, when he was young and stupid, it hadn’t occurred to him that an earthly paradise that had to be forced upon people by violence and intimidation might not be a paradise at all. Now he’s grown up. He’s put all that behind him.

Or at least he thought he’d put it all behind him. That was before Christine Norman (Janis Carter) walked back into his life. 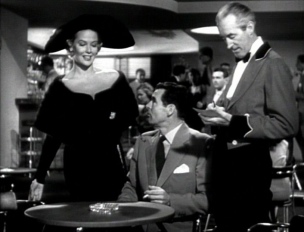 They’d been lovers back in the days when they were going to save the world, but Christine hasn’t grown up. She still believes in the party, and even worse she cannot accept that Frank Johnson outgrew her. Thanks to Christine the party gets its hooks back into Bradley Collins. He wants nothing to do with them but they have some very incriminating evidence on his past life, including a death that may have been murder and that Collins/Johnson was involved in, although whether he had or had not actually committed murder is a question the movie rather interestingly leaves open. Either way the evidence is damaging enough, and Collins is informed that he can now consider himself to be once again an active party member and he can start by helping the party to cause trouble on the waterfront.

This is where the movie’s noirness starts to kick in. Collins is certainly in a difficult situation, but realistically the worst way to deal with blackmail is to pay up. That way you just keep on paying. But not paying up requires strength of character. Bradley Collins is a classic noir protagonist. He is not a bad man but he is a weak man. He knows if he goes along with the party’s demands he will never escape their clutches but he lacks the courage to resist. He believes he can keep things under control, but Christine Norman hasn’t finished with him yet. 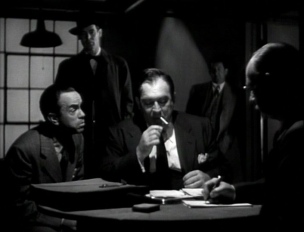 Christine Norman is the classic noir femme fatale, and if she can’t get Collins back she can certainly get revenge. She can do this through Collins’ brother-in-law Don Lowry (John Agar), a likeable enough young man but unfortunately a young man who is as naïve about women as he is about politics. Christine will discover that even when you’re a femme fatale and you think you’ve got everything under control events can still get away from you and even the most cunning schemes can blow up in your face.

The movie’s very overt anti-communism will make this movie deeply unfashionable today. Unfortunately it has led a lot of people to simply dismiss the movie. In fact the plot would have worked equally well if Bradley Collins had been a former Mob stooge who had tried to put his mobster past behind him. If the movie had been made with that slight alteration (and it would have required only very minor changes) it would now be praised as a gritty hard-hitting noir classic. The fact is that either way it is a gritty hard-hitting noir classic. 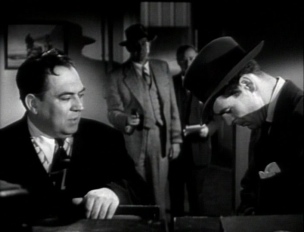 Director Robert Stevenson had a very successful career, even earning a Best Director Oscar nomination in later years, and he does a thoroughly competent job. He has the considerable advantage in this movie of having Nicholas Musuraca, one of the true noir greats, as his cinematographer. Musuraca gives this film the full noir treatment. The climactic warehouse scenes are expertly done and highly effective, and genuinely thrilling.

Robert Ryan rarely, if ever, gave a bad performance. Here he’s playing a weaker character than usual but Ryan was always good at playing flawed characters and he does a fine job. Janis Carter doesn’t quite pull off her rôle. She does the femme fatale thing just fine, in fact extremely well, but she isn’t quite convincing as a fanatical ideologue. She’s still a memorable spider woman. Laraine Day is solid but it’s the supporting players who really shine. Thomas Gomez makes a superbly ruthless and menacing villain while William Talman is terrific as a very creepy hitman (a rôle he would play just as effectively in a number of subsequent movies). 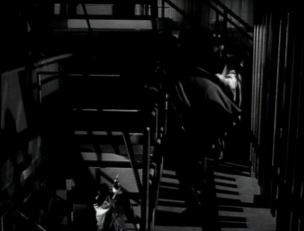 The Warner Archive made-on-demand DVD is absolutely barebones, lacking even a trailer, but it offers an exceptionally fine transfer.

Film noir has always had an affinity with melodrama and this movie succeeds as both noir and melodrama. It’s both gritty and surprisingly bleak. If you’re put off by the film’s politics just imagine it as a mobster movie and you may find yourself enjoying it quite a bit. Highly recommended.
Posted by dfordoom at 8:27 PM