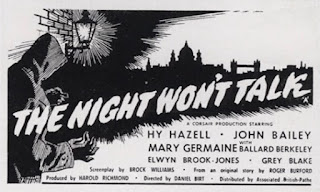 The murder of glamorous artist’s model Stella Smith is the starting point for The Night Won’t Talk, a fairly typical example of the 1950s British crime B-movie (in this case dating from 1952).

Stella Smith was popular with the artists for whom she posed, and not necessarily because of her virtues as a model. In fact virtue is not the first word that would come to mind when describing Stella. She was also rather ruthless in her pursuit of men, a quality that did not endear her to some of the other models. The list of people with a grudge against Stella Smith is rather a long one (it includes just about everyone who knew her). The problem for Inspector West (Ballard Berkeley) is deciding precisely where to start. 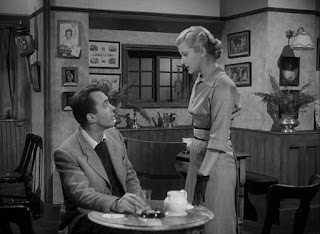 There are three male painters and one lady painter for whom Stella posed regularly. They are all members of the Portrait Club of which Martin Soames (Elwyn Brook-Jones) is the president. Soames certainly knew Stella very well indeed. So did Clayton Hawkes (John Bailey), in fact he and Stella were engaged to be married although the engagement was not exactly going smoothly due to Stella’s excessive friendliness towards a number of other men. Clayton’s big problem is that as a result of an injury sustained during the war he suffers from blackouts so he actually has no idea if he murdered Stella or not.

Kenneth Wills is another artist who might have had a reason to kill Stella. Kenneth thinks he’s a ladies’ man, an opinion which the ladies unfortunately do not share. Martin Soames might perhaps have had a reason to murder Stella, a reason with its roots in the past. There is no obvious reason why lady artist Theo Castle (Hy Hazell) would have wanted Stella dead, except that pretty much everyone seems to have wanted Stella dead. Model Hazel Carr (Mary Germaine) had excellent reasons to hate Stella as well. 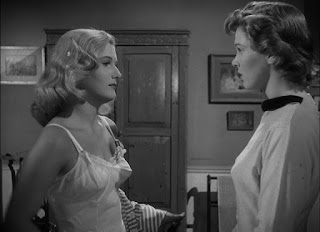 The script, by the prolific Brock Williams, might not rate high for originality but it’s solid enough to keep us in doubt and to keep us interested. Director Daniel Birt did not have a spectacular career but he’s competent enough and there are no causes for complaint with the job he does here.

As so often with 50s British B-movies the cast contains lots of familiar faces and lots of very capable actors. Hy Hazell gets top billing as the elegant and slightly mysterious Theo Castle and she’s all that we expect a lady artist to be. Elwyn Brook-Jones is deliciously oily as Soames. Mary Germaine is fairly impressive as Hazel, a girl we might not be quite sure of at first - she might be a bit of a schemer or she might be a nice girl who has just decided that Clayton is the man she wants and now she’s going to make sure she gets him. 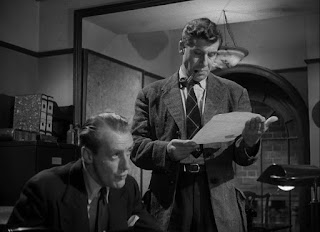 Playing Inspector West’s dour pipe-smoking Scottish sergeant is Duncan Lamont and this would not be the first or the last time he played such roles (and he does it pretty well). Ballard Berkeley makes a fine movie policeman, in this case one with just a slight edge of callousness. John Bailey wisely does not go too far over-the-top in his performance as the somewhat unstable Hawkes.

The murder of models was a popular subject for murder mysteries at the time, offering opportunities for glamour and some very mild titillation. And of course since artists and models are all eccentric, socially inept and at least slightly wicked the art world provides an absolutely splendid background for murder and mayhem. 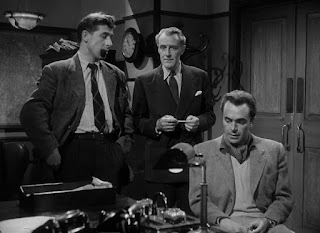 Network’s Region 2 DVD gives us, as usual, an excellent transfer without any extras but at a very reasonable price.

Crime movies are easy to make on limited budgets and were therefore an extremely popular B-movie genre on both sides of the Atlantic. The British film industry developed an extraordinary capacity for churning them out in large numbers whilst still maintaining a consistently high standard. The Night Won’t Talk is an unassuming but very enjoyable example that ticks all the right boxes and doesn’t really put a foot wrong during the course of its modest 61-minute running time. Highly recommended.
Posted by dfordoom at 3:36 PM