Two Letter Alibi (also released as Death and the Sky Above) is a pretty routine but enjoyable 1961 British crime melodrama.

Charles Hilary (Peter Williams) is estranged from his wife Louise (Ursula Howells). He wants to marry glamorous television presenter Kathy Forrester (Petra Davies) but Louise absolutely refuses to consider giving him a divorce. While Louise is a drunk and she certainly has boyfriends she assures Charles that it would be futile for him to try to divorce her - she has been very discreet in her love affairs. Their final meeting ends in a great deal of unpleasantness.

It is therefore very unfortunate for Charles when his wife is murdered. He is very obviously going to be the prime suspect, and it’s even more unfortunate that there is a great deal of quite convincing circumstantial evidence against him. 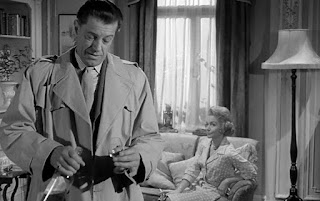 Charles continues to protest his innocence but the shadow of the gallows is looming ever closer. The case against him is so strong as to make the verdict in his trial virtually inevitable.

His big problem is that his alibi, while it might well be genuine, is flimsy and unconvincing and is very unlikely to impress a jury (it certainly doesn’t impress the police).

The only way out is clearly to find the real killer. The police regard the matter as closed so Kathy decides she’ll have to play amateur detective. Charles decides (wrongly) that the wisest thing for him to do is to run. 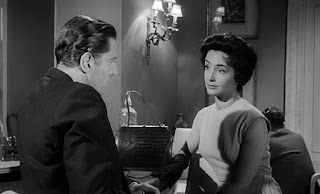 The first half of the movie is well-paced and really quite good. It gets bogged down in the middle. Courtroom scenes always seem like an easy to add drama but unless they’re handled with skill they can end up being slow and tedious, and sadly that’s the case here. Once the courtroom scenes are out of the way the plot kicks in again and things pick up.

Robert Lynn had a less than stellar career as a director in movies and television. He doesn’t quite manage to get the most out of the story. Some of the key dramatic moments don’t have the necessary impact.

Roger Marshall would go on to be one of the best television writers of the 60s and 70s and his screenplay here is more than serviceable. 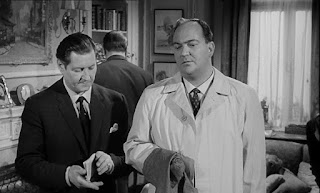 The very short running time of just 57 minutes is a weakness. Some of the key plot elements, such as the alibi and the two-letter clue, really would have benefited from being fleshed out a bit and some of the dramatic scenes needed a bit more of a buildup.

Star Peter Williams doesn’t really have the charisma to carry this film although his performance is quite adequate. Petra Davies is solid enough as Kathy. Ursula Howells on the other hand gives her usual spirited performance as the spiteful wife Louise. Stratford Johns was a great character actor and he certainly knew how to play policeman (he spent most of the 60s playing them to great acclaim and with enormous success on British television) but as Superintendent Bates he’s rather subdued here and in any case he’s not given enough to do. 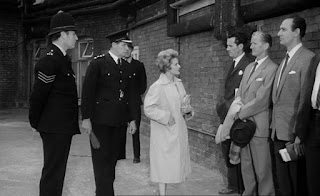 Network’s Region 2 DVD is barebones but it’s a nice transfer. The movie is black-and-white and in its correct 1.33:1 aspect ratio.

Two Letter Alibi is one of the lesser British mystery thrillers of its era. It’s very low-key, maybe just a bit too low-key for its own good, but it’s a reasonably diverting time-killer. Worth a rental, or a purchase if you can pick it up very cheaply.
Posted by dfordoom at 7:35 PM