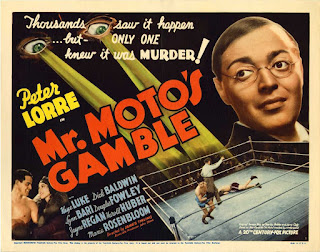 Mr Moto’s Gamble is the weakest of the Mr Moto films but it does have an interesting story behind, a story that does a great deal to explain why this movie doesn’t quite work.

Mr Moto’s Gamble started life as an entry in Fox’s hugely successful Charlie Chan series. It was going to be a boxing mystery entitled Charlie Chan at the Ringside. Unfortunately by this time the star of the Chan series, Warner Oland, was beginning to have a few problems. He was drinking and his marriage was breaking up. He was forgetting his lines and he was becoming temperamental. On the first day of shooting in January 1938 he walked off the set. Having been persuaded to continue the film, he walked off the set again. He insisted that production be moved to a different sound stage. Finally he walked off the set for a third time, never to return. This was, sadly, to be the end of his career (in August of that year he passed away).

Oland’s departure left Fox with a problem. They had a script that everybody was happy with. They had the sets ready to go. Some footage had already been shot. The studio was reluctant simply to scrap the film. The solution they came up with was to turn Charlie Chan at the Ringside into a Mr Moto film. They had already made two Mr Moto movies which had been extremely successful. It all seemed like a good idea. 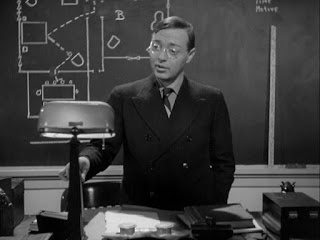 The trouble was that Charlie Chan and Mr Moto are very different characters, and the Chan and Moto movies have an entirely different flavour. Mr Moto is not a straightforward detective. In the novels by John P. Marquand (which I highly recommend) Moto is a Japanese spymaster. In the movies he becomes an Interpol agent but it’s still quite clear that Moto is a man with connections in the intelligence community (in fact he probably has connections in the intelligence communities of several different countries). Mr Moto does not investigate routine murder cases. His cases either involve espionage in some form or at the very least they have some hint of international intrigue to them. Mr Moto is a slightly mysterious figure and there’s a touch of ambiguity to his character. He is also something of an action hero, and he can be quite ruthless. In other words he’s nothing at all  like Charlie Chan and the Mr Moto movies are nothing like the Chan movies.

The problem here is that Mr Moto’s Gamble has a plot that is very much a Charlie Chan sort of plot. The whole movie still feels like a Chan movie. And Mr Moto just doesn’t quite fit in. Peter Lorre as Moto tries hard but he’s just not given enough Mr Moto type things to do and his performance falls just a little bit flat. 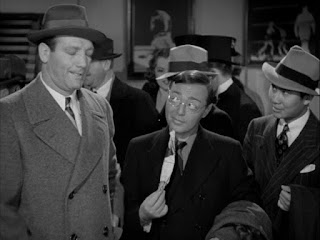 Another legacy of the film’s origin is the presence in the cast of Keye Luke, playing Charlie Chan’s son Lee! This also doesn’t quite work out. When Mr Moto is on a case he is the quintessential loner. Given the types of cases he usually deals with this is understandable - he has to play his cards very close to his chest. Moto has absolutely no need whatsoever for a sidekick. In this movie he is given two. Not just Chan Junior but also a kleptomaniac ex-boxer turned trainee criminologist named Wellington (Maxie Rosenbloom). They both provide comic relief, and they provide too much of it, although Wellington’s kleptomania does at least play a role in the plot.

The plot involves a boxing match that may or may not have been rigged but that results in the death of one of the fighters. Moto immediately realises the death was no accident. It was murder. There were some huge and very suspicious bets placed on the fight, by a variety of crooked gamblers all of whom seem to be trying to double-cross each other. It’s not a bad story and would have made an excellent Chan film. 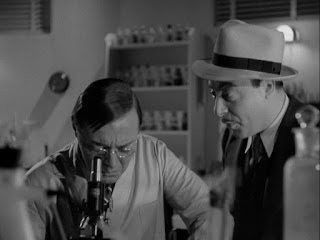 The supporting cast is quite strong and includes (in a very minor role) Lon Chaney Jr. Bernard Nedell impresses as a very smooth but sinister gambler.

Lynn Bari is probably the standout performer here. She’s lively and vivacious and she manages the feisty girl reporter thing without being irritating. 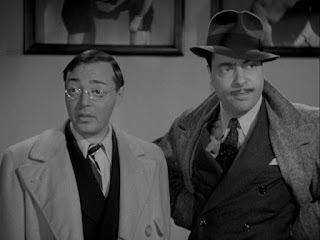 As I mentioned earlier Peter Lorre is hampered by the necessity of having to play Moto as if he’s Charlie Chan, and to make things worse he’s stuck with dialogue written for Chan.

Mr Moto’s Gamble is reasonably entertaining but it does not have the feel of a Moto film and hardcore Moto fans are likely to be a little disappointed. So this one is recommended, but with reservations.
Posted by dfordoom at 6:24 PM