The Man with a Cloak is an interesting idea that doesn’t quite come off but this 1951 MGM period crime melodrama is worth watching for some glorious acting.

Madeleine Minot (Leslie Caron) is a young French girl who arrives in New York in 1848 in search of the ageing and very disreputable Charles Thevenet (Louis Calhern). Thevenet had been one of Napoleon’s generals and remains an enthusiastic Bonapartist. His loyalty to Bonaparte has been equalled only by his devotion to women and dissipation. Madeleine on the other hand is a Republican but for some reason she has convinced herself that she can persuade the old man to leave his fortune to his grandson in Paris. She is in love with the grandson. Once they get the old boy’s money they will use it for the cause of Republicanism (or at least they’ve convinced themselves that they only want Thevenet’s money for that idealistic purpose). 1848 was of course the year that saw the establishment of the short-lived Second Republic in France, which was soon swept away by Napoleon III.

Madeleine and her lover are not the only ones after Thevenet’s money. His mistress Lorna Bounty (Barbara Stanwyck) and his butler Martin (Joe de Santis) have spent years waiting for Thevenet to die so they can get his fortune. It has even crossed their minds that it might be possible to hasten the old man’s demise. 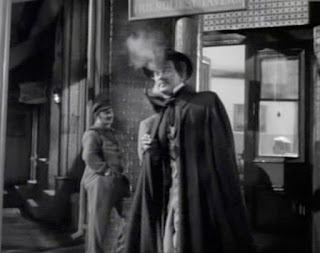 Lorna and Martin are clever and ruthless and the naïve Madeleine might seem to be completely outclassed by such seasoned conspirators but she has acquired an unlikely (although possibly not entirely reliable) ally in the person of a drunken poet named Dupin (Joseph Cotten). Dupin is perpetually penniless and drunk but he’s no fool and Lorna immediately recognises him as a dangerous enemy. Being the sort of woman she is she sets out to neutralise the threat by enticing Dupin with the prospect of either a share of the loot or a chance to enjoy her physical charms.

What follows is a battle of wits and wills between Dupin and Lorna.

The plot (based on a story by John Dickson Carr) is absurdly melodramatic and overwrought but it has its moments. There are times however when it threatens to collapse under the weight of its own self-conscious cleverness.

Dupin is supposed to be a mystery man with his true identity only revealed as a surprise twist at the end although in fact his identity is blindingly obvious right from the start. Fortunately it doesn’t really matter since it’s only a literary in-joke and actually the movie might have worked better had that whole idea been ditched. 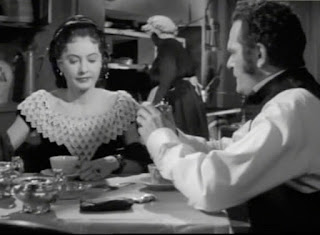 It’s the acting that carries this movie. Stanwyck is in full-on spider woman mode and she’s magnificent. There’s some subtlety here too. Lorna Bounty is scheming, unscrupulous and very deadly but she’s oddly sympathetic at times. She’s villainous but only up to a point. She’s prepared to do what she has to do to get that money but in a perverse way she’s honest and open about her scheming. Old Thevenet has always known what the score was. And her ruthlessness has limits - she has no interest in cruelty for its own sake.

Joseph Cotten is pretty good too. He has no pride but he has charm. He’s a likeable rogue.

Louis Calhern is excellent, making Thevenet a thorough reprobate but a rather good-natured one. He’s selfish and self-indulgent but he’s never pretended to be a saint. 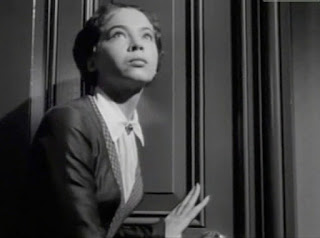 Leslie Caron is the problem. We’re meant to regard Madeleine as the idealistic heroine but oddly enough she comes across as being more of a hypocrite than the supposed villains. She also comes across as insipid and irritating.

Jim Backus as the good-hearted Irish innkeeper who allows Dupin to remain permanently drunk on permanent credit is the best of the supporting players.

The period details are impressive. This is an MGM movie so it looks like it’s had a lot of money spent on it, and well spent too. 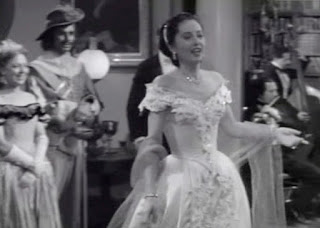 The Man with a Cloak has some neat little ideas in it. There’s plenty of scheming but what’s going on is not always as obvious as it seems and there are some nice ironic touches. At times it gets a bit too clever for its own good but it’s always entertaining. The performances, especially those by Stanwyck and Calhern, are more than sufficient reason to see it. This is an absolute must-see movie for Barbara Stanwyck fans.

The Man with a Cloak has been released in the made-on-demand Warner Archive series. I can’t comment on the quality of that disc since I caught this movie on TCM.

Very melodramatic but despite a few flaws it’s thoroughly enjoyable and definitely recommended.
Posted by dfordoom at 8:37 PM